Earlier this year, we had the opportunity to spend quality time with the BMW M3 Touring at the Goodwood Festival of Speed. Although the super wagon made its first public outing in the UK, the prototypes were all built in left-hand-drive configuration. If you’re curious to see the AMG C63 Estate rival with the steering wheel on the other side, look no further than this video.

Shot during the BMW PGA Championship at the Wentworth Club in London, the footage shows the G81 in an Individual Frozen Black paint. Unlike the M3 Touring finished in the same Individual paint we saw at the Goodwood FoS, this one does away with the optional M Performance Parts. There are no flashy front canards on the bumper or Frozen Gold wheels as it retains the standard specification. 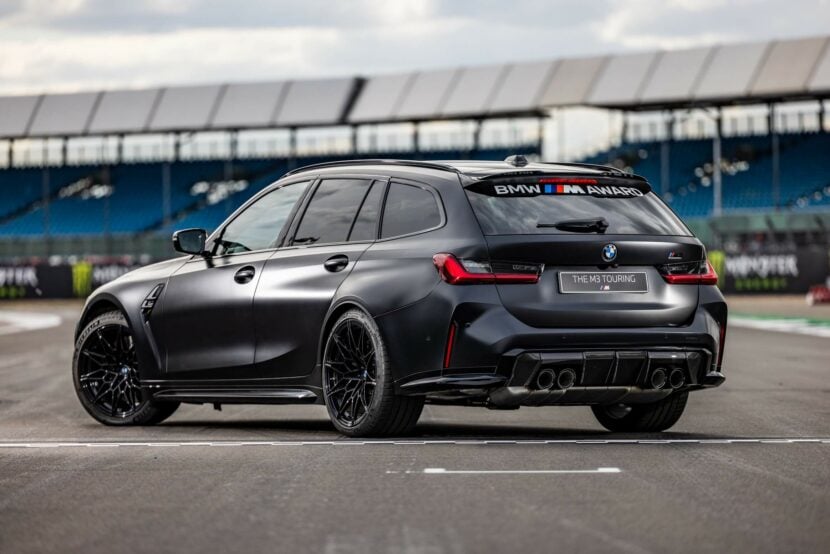 The stealthy wagon has optional body-hugging bucket seats with a carbon fiber shell, but it lacks the M3 Sedan’s carbon fiber roof. That’s because BMW M is offering the lightweight roof exclusively on the saloon, and for 2023, the M340i Sedan gets it as well at an additional cost. As with all 3 Series LCI models, it comes with the iDrive 8 featuring a 12.3-inch driver’s display and a 14.9-inch touchscreen.

However, the M3 has yet to receive a full-on LCI. It is believed BMW is working on visual changes slated to arrive later in the sedan’s life cycle. Logic tells us the wagon will benefit from these tweaks as well, along with the M4 Coupe and Convertible. These programmed updates are meant to keep the M3/M4 fresh in light of a decision to prolong their life cycle until 2027.

The M3 Touring is unquestionably the do-it-all car in the lineup and only the third ever M Touring, after the E34 and E61 M5 models. A fourth is believed to be in the works as the M5 Touring is rumored to return by the middle of the decade.