Buyer’s Guide: Which BMW X5 should I buy?

Home » Buyer’s Guide: Which BMW X5 should I buy? 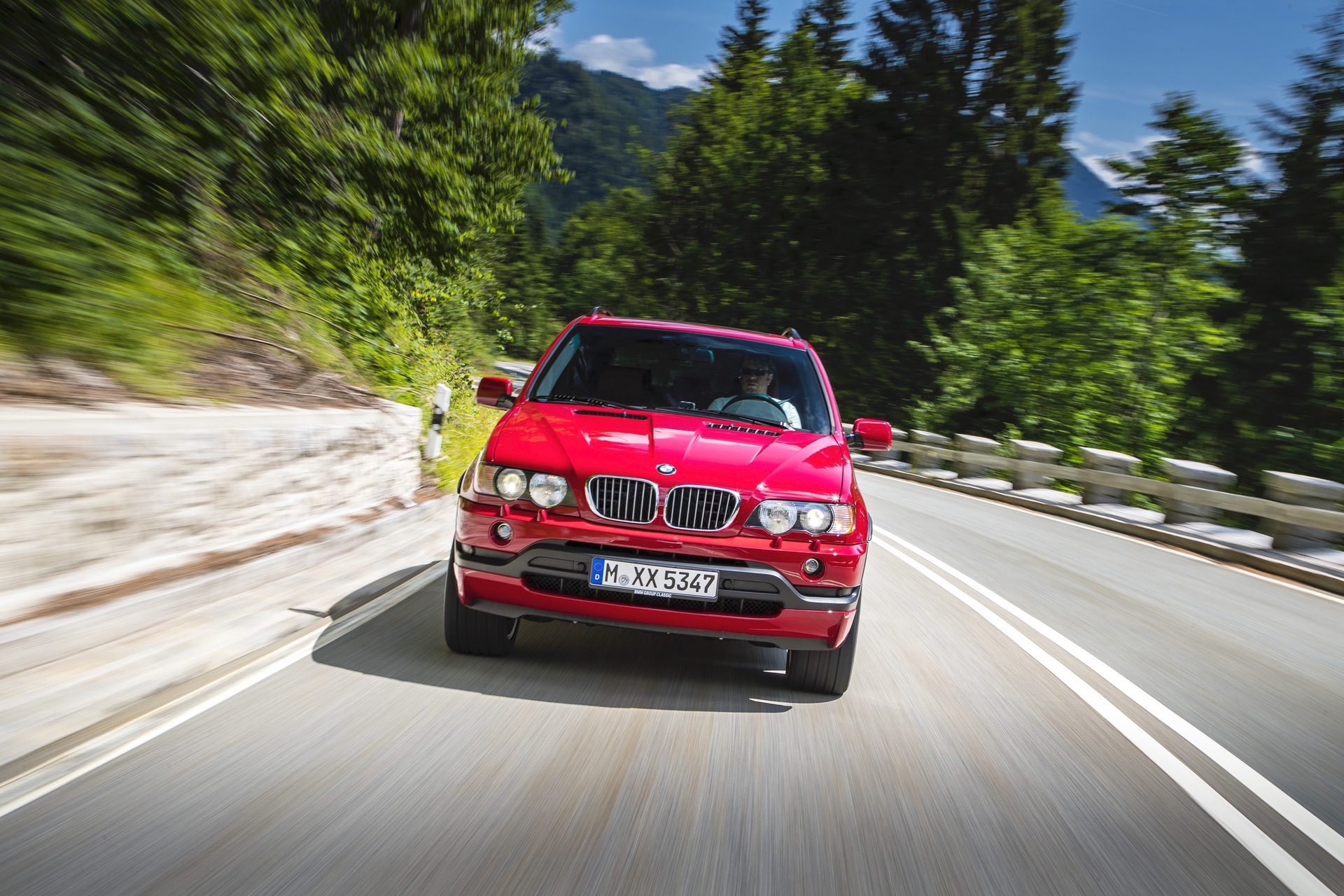 The BMW X5 is BMW’s first SAV and has now been in production for over 20 years. This means that when it comes to buying options, you have plenty – over a dozen different options when considering engine pairings and drive types. And since the current market is pricing new vehicles out of reach for many, there’s no better time to start looking at a used BMW X5 if you’re in the market for an SUV. Here, we’ll take a look at the different BMW X5 options you have and hopefully determine which model is right for you!

The first ever BMW X5 debuted in 2000 and is the genesis of the term “Sport Activity Vehicle”. This quintessentially BMW marketing speak implies that the vehicle handles more like a car than a truck. Thankfully, period reviews seem to back that claim up. It was initially available with a 3.0L inline six and a 4.4L V8, with regular displacement and power bumps received through the years for the V8. Interestingly, you could also pair the 3.0L with a genuine, row-your-own manual Getrag transmission.

The last year’s V8 stepped up to an impressive 4.8L good for around 355 horsepower, competing with the Porsche Cayenne Turbo and Mercedes’ ML55 AMG. This “4.8is” trim went all in on the “Sport” aspect of Sport Activity vehicle – receiving bigger brakes, impressive 20” wheels sporting massive 275/40/20 tires in the front and 315/35/20 in the rear, and more aggressive fender flares all held over from the 4.6is. It’s also got very balanced weight distribution, with 49.1% of the vehicle’s total 5100ish pounds sitting over the front, and 50.9% over the rear.

So, with a naturally aspirated V8, the option of a manual trans, and classic BMW road feel, balance, and steering, what’s not to love about the E53? Well, the youngest of these first gen X5s are still well over 15 years old, so pretty much anything is fair game as far as replacing and repairing aged parts. All of the X5s use a version of self-leveling air suspension, a notoriously unreliable piece of equipment. And it’s a case of pick you poison with the V8s – all of which have their own unique set costly potential repairs.

So, if you’re looking for the most engaging and best sounding X5, and have some money set aside for repairs, the E53 is a great choice. The 4.6 and 4.8 look, sound, and drive the best, but the 3.0 is good too – and will likely be much more reliable, with the added novelty of the available manual transmission.

The second generation of the BMW X5 showed up as a 2007 model year and offered much of the same from the previous generation. An available 3.0 liter inline six and a 4.8 liter V8 were both available from day one. These engine options changed around the time the X5 received its LCI, to the familiar N55 turbocharged inline-six and the twin-turbo N63 V8. Gone was the manual option, but the U.S. did receive a diesel – the BMW X5 35d – which has since received a bit of a cult following for its general reliability, uniqueness, and tunability.

Another first was the X5 M, which was premiered at the New York Auto Show in 2009. It is the first BMW to receive the S63 engine, which you can still find a variant of today in all of BMW M’s V8-powered cars. With massive 15” brakes, 555 horsepower, paddle shifters, and standard Servotronic hydraulic steering, the X5 M outperformed its peers at the time and remains a compelling option for the performance minded still ten years later.

The mid-lifecycle refresh for the 2010 model year made a bunch of cosmetic enhancements inside and outside the X5. Aside from pushing out the naturally aspirated engines, it also paired them with new 8-speed automatics improving both performance and fuel economy.

For the most part, there’s very little reason to consider a pre-facelift E70. The newer ones look and drive better, unless you really need that naturally aspirated goodness (and if you do I’d recommend sticking to a first-generation car). The two gems of this generation are for sure the diesel and the X5 M, both of which offer a unique ownership experience – and aren’t even that bad from a maintenance standpoint. The S63 is arguably more reliable than the N62 and N63 its related to, and if you can get away with deleting the emission systems in the 35d you’ll be pretty much set.

After the E70 comes the F15, and it finished production with the introduction of the G05 in 2018. The F15 carries over the same engine options from the last generation – diesel, inline-six, and V8. All turbocharged, and all receiving the eight-speed Steptronic automatic. They all get updated iDrive, with the latest models receiving iDrive 6 (which remains fairly modern).

New things? The xDrive40e is introduced as a PHEV option, using a combination of the N20 four-cylinder engine and an electric motor. Good for 308 horsepower and 332 pound-feet of torque, it represents a solid value on the used market, especially as electric infrastructure improves. Electric-only range is a lousy 14 miles, less than half of what the current-gen 45e gets.

The F85 is the X5 M variant, one of the first BMWs to receive separate chassis codes for the M versus the non-M designation. The F85 gets a (now familiar) ZF 8HP automatic, which improves fuel economy and promises some crispy shifts.  The F85 also gets a slight power bump, significant interior materials improvement, and a much more modern iDrive.

The F15 and F85 both offer some of the best “by-the-numbers” performance, but it gets more complicated when you look at what some consider to be the most important number of all: price. Even a higher mile X5 M can be north of $75,000, which gets you into a pretty nice G05. Even the smaller engine cars are commanding huge numbers right now – there’s no shortage of F15s listed well over $50,000. But if you’re willing to pay to play, the F15 – or F85 – represent the objectively best all-around choice on the list.

While probably not worth including due to the current insanity in the car market, the G05 does need to be mentioned. It’s a pretty significant step forward in terms of technology, and most of them still remain in their warranty periods. The newly-introduced X5 M50i offers up to 523 horsepower (don’t be hoodwinked: the xDrive50 is only good for 456 horsepower!), putting prior-generation X5 M’s performances squarely in its sights. And as you probably already know, the current F95 X5 M is a 617 horsepower monster.

Additionally – all of the tech you could ever want. iDrive 7 is constantly being upgraded, but out of the box it offers a dizzying array of tech, options, and customizability compared to the older cars.

Of course, you can’t get the diesel anymore. And it probably won’t come with a 3rd row seat, either (though an early option, it’s been removed for a while now). And you’re gonna pay – most of these are still selling close to their original MSRP, at which point it makes little sense to buy used. But if you can manage the scratch, the G05 is still – technically – the pinnacle of the X5.

Which BMW X5 Should I Buy?

Shop for what you need. While price point is likely high on the list of importance, the used BMW X5 models on this list range from the four- or five-thousand-dollar E53 that needs a ton of work, to a $100,000 CPO X5 M50i. Both are the right car – for the right person. If you need a grocery-getting light off roader, the E70 X5 will probably tick enough of the boxes for it to make sense. If your daily driving this thing with kids in the backseat every day, the enhanced safety and relative reliability of the F15 will probably be a better choice.

My choice? Well, I got pretty distracted by the first-gen 4.8is while doing research for this piece. They’re damn interesting and certainly historically important to the brand. And make lots of V8 noises. But I’ve also driven the E70 and F85 X5 Ms, and fondly remember just how good they are to this day. Decisions, decisions…which one is your favorite?

Is BMW X5 a five or seven seater?

The BMW X5 comes standard with five seats. But some X5 models can be optioned with a third-bench to provide seven seats. Some of the exceptions are the BMW X5 xDrive45 plug-in hybrid which needs the rear space for its battery pack.

Is the BMW X5 larger than Audi Q5?

The BMW X5 is larger than the Q5. It is 10 inches longer, four inches wider and three inches taller. It also offers more cargo room compared to the Q5.

Is the BMW X5 better than Audi Q7?

Both SUVs are competing in the mid-size luxury segment. But just like with most BMW SUVs, the emphasis with the X5 is put on the driving dynamics. Based on test drive reviews, the BMW X5 offers a sportier ride than the Q7. On the other hand, the Audi Q7 stands out with a high-tech interior and it also features the quattro all-drive system.

The BMW X3 is smaller in size and cargo capacity than the BMW X5. Of course, being the larger and more expensive model, the BMW X5 comes with more power and also with a V8 engine. The X3’s highest engine offering is the BMW X3 M40i with a six-cylinder 3.0 liter engine. So if you want more power and space, but pay a bit more, than the BMW X5 is the right choice for you.

In our opinion, the current BMW X5 xDrive40e plug-in hybrid, and the future BMW X5 xDrive50e PHEV, offers the right balance between fuel efficiency and power. The engine by itself makes 282 horsepower, which is less than the 335 horsepower of the purely-gasoline X5 xDrive40i. However, its less powerful state of tune is more efficient, which makes it more useful for hybrid duty. Don’t think it’s a slouch, though, as the total combined power output of the hybrid X5 is a whopping 389 horsepower and 443 lb-ft of torque.