BMW enthusiasts probably remember Isle Of Man Green was the M3 G80 Sedan’s launch control, but we have yet to see its Touring counterpart in this attractive color. A new video shows a production-ready prototype of the first-ever M3 with a long roof doing some hot laps around the challenging Nürburgring. Having been unveiled in mid-June, the G81 thankfully doesn’t have any camouflage anymore, thus allowing us to see how it looks in a green shade named after a British island in the Irish Sea.

The Isle Of Man Green paint is combined with a glossy black finish for the roof and side mirror caps, while the 19-inch front and 20-inch rear forged wheels also have a dark appearance. As previously mentioned, there’s no carbon fiber roof option for the first-ever M3 Touring since BMW figured it would’ve been too much of a hassle to modify the assembly line for what it estimates will be a low-volume product. 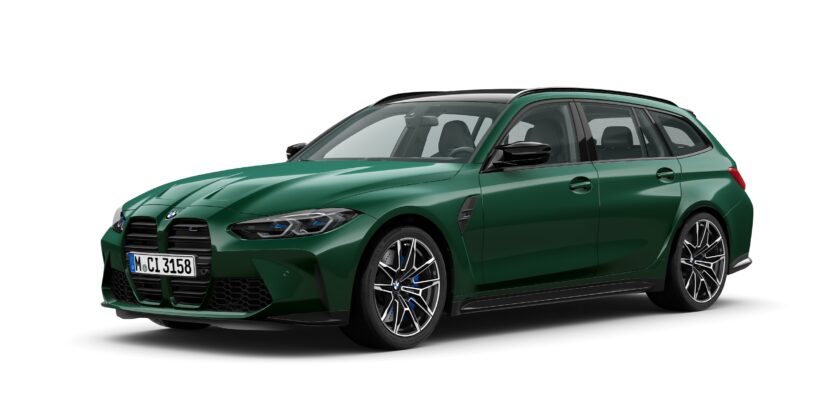 It’s quite obvious the test driver was pushing the AMG C63 Estate competitor quite hard judging by how much the tires are screeching through those high-speed corners. During the painstakingly long teaser campaign, BMW repeatedly said the main focus during development was to make the M3 Touring as dynamic as its sedan sibling by offsetting the extra bulk as much as possible.

Eagle-eyed viewers will notice the prototype – which had the anniversary BMW Motorsport emblems – lost its rear license plate at one point. It does look exceptionally quick for a wagon, which isn’t exactly lightweight since it tips the scales at 1,865 kilograms (4,111 pounds). To put that number into perspective, the M3 Touring weighs only 30 kg (66 lbs) less than the bigger M5.

A forbidden fruit in the United States, the M3 Touring comes only in the Competition flavor with xDrive and an automatic transmission. It has already been showcased with the fully array of optional M Performance Parts, including everything from carbon fiber front canards to the centrally mounted exhaust tips as seen on the MotoGP Safety Car.