Home » Racing » The history of BMW Safety Cars: Over 20 years of experience

The history of BMW Safety Cars: Over 20 years of experience 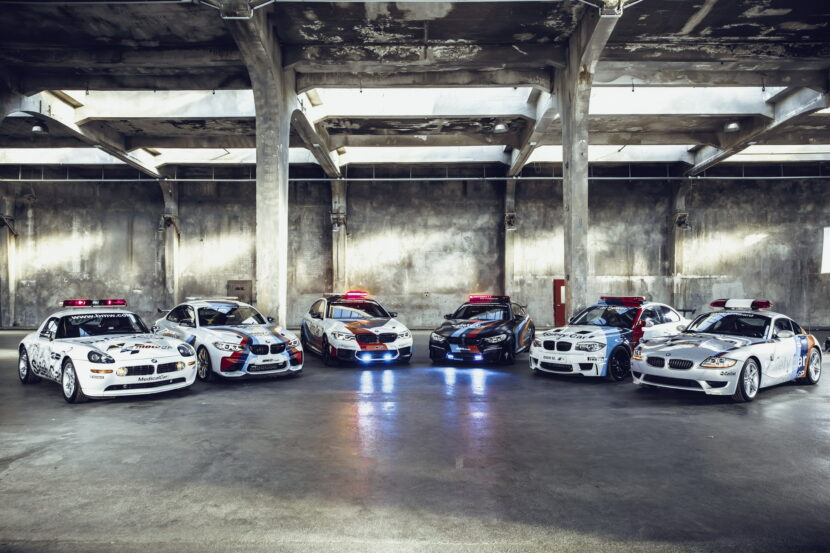 BMW has a rich tradition of supplying Safety Cars for various motorsport competitions such as DTM, MotoGP and Formula E. For over 20 years, BMW has constantly provided sensational Safety Cars to restore the order after intense and unexpected events happened during MotoGP, DTM and Formula E races.

The BMW Safety Cars have also made their appearance at the 24-hour race at Le Mans. In Formula E, BMW is setting a premiere by offering the i8 plug-in hybrid supercar as Official Safety Car of the series ever since 2014. 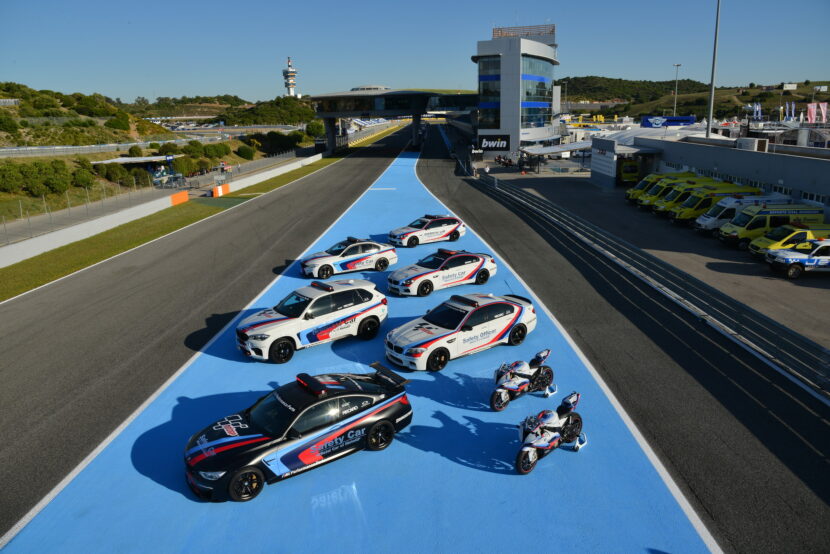 The Garching-based high performance division has deployed their pace cars in various competitions as test beds to collect useful data for future powertrain and dynamics developments.

We begin our journey back in 1999, when BMW started the long-term partnership with Moto GP. 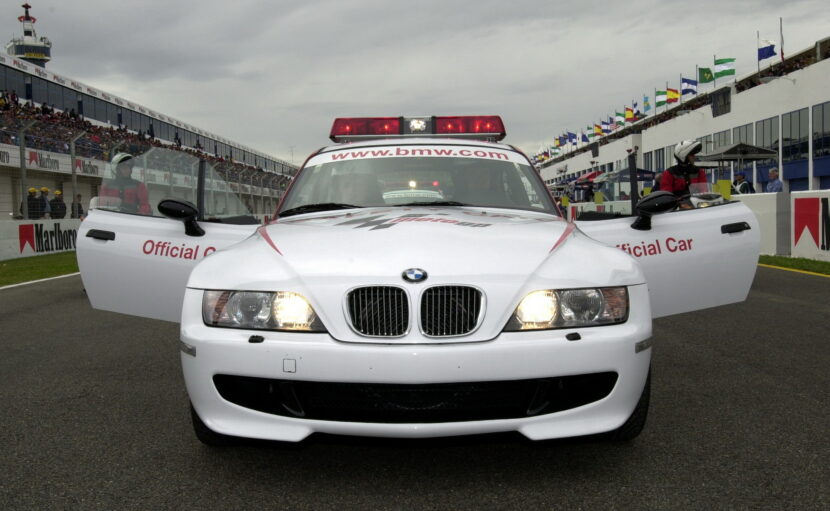 Internally identified as the E36/8 generation, the Z3 M Coupe was the pioneer of BMW M Safety Car. Already a popular car, and nowadays a true classic, the BMW Z3 M Coupe was perfectly suited for restoring the order in the motorcycle competition. 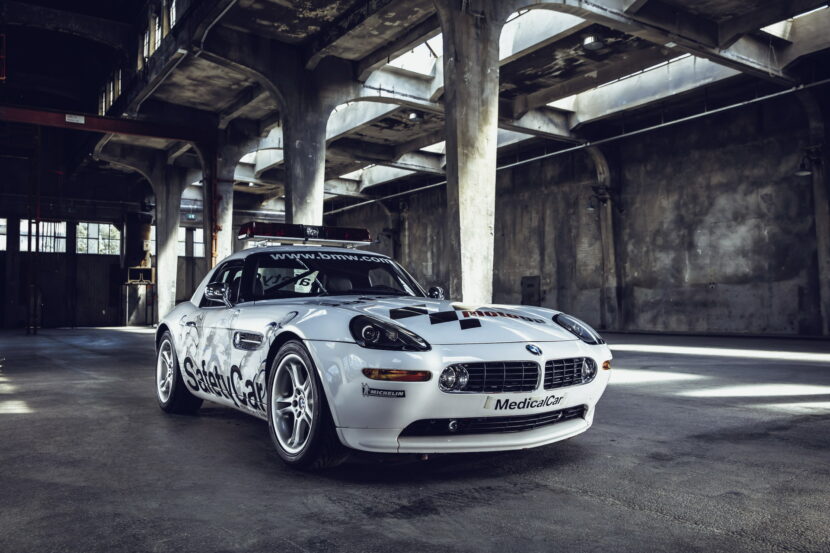 For the MotoGP season 2001 to 2003, BMW deployed a larger fleet of Safety Cars. The star of the lineup was essentially the Z8 Roadster, a modern successor to the 507 icon and the Bond car in the movie series launched in early 2000s. 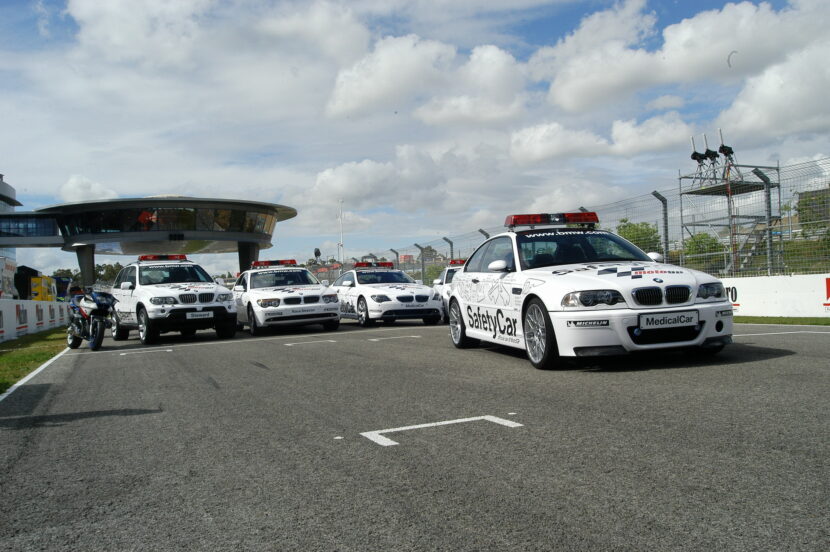 Starting with the 2004 season, BMW ushered its then brand new M6 Coupe (E63) as a Safety Car in MotoGP. The M6 was joined by the new M5 of the E60 generation. Both high-performance cars were powered by a 5.0-liter V10 engine with natural aspiration.

Apart from the M3 Coupe (E46) that was continuing its journey as MotoGP Safety Car, BMW also delivered the M3 CSL (E46) to work in the competition. Compared to the standard version, the M3 CSL was about 180 kilos lighter and boasted an increased output of 360 PS (354 hp) for the 6-cylinder engine.

The M3 CSL made an extensive use of carbon fiber and CFRP parts, such as the roof and front splitter, measures that helped engineers reduce the overall kerb weight. The specific output of the I6 unit hit an impressive 111 PS/liter.

Besides these models, BMW also offered a fleet of BMW X5 (E53) shuttle vehicles. The chosen Race Director car was a 7 Series (E65), while the Medical Car was a 3 Series Touring (E46 LCI). The Safety Director drove a 5 Series Touring with M Sport package (E61). 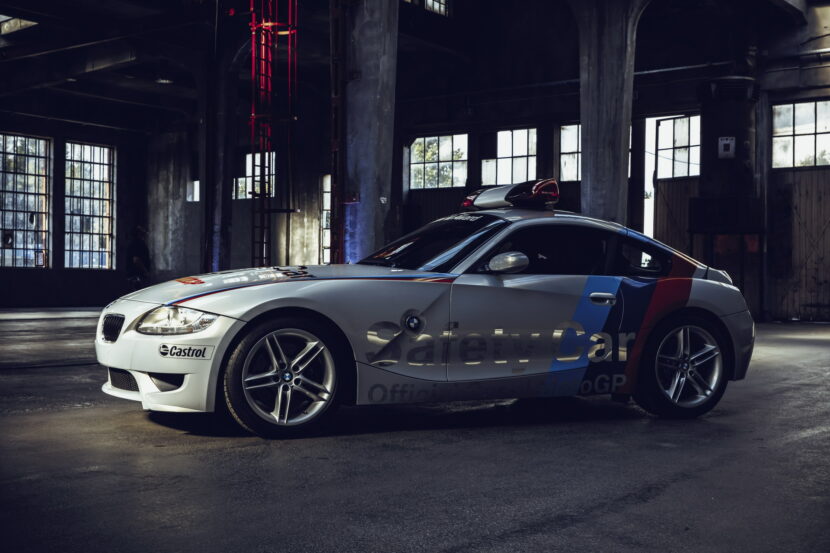 The Z4 M Coupe appeared for a single season in MotoGP as the halo model of the Safety Car fleet. The 2-door vehicle was equipped with the same straight-six, naturally aspirated unit as the M3 Coupe (E46). The engine produced 343 PS (338 hp).

Together with the Z4 M Coupe, the E63 M6 and E60 M5 models also continued their role as Safety Cars. 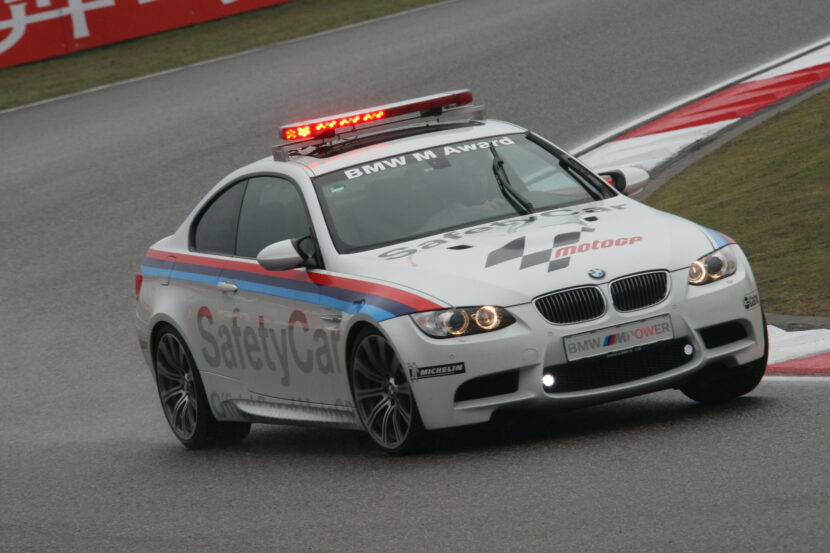 The BMW Z4 M Coupe had a short tenure as Safety Car in MotoGP, as it was replaced starting 2008 with the then brand new BMW M3 Coupe (E92). The fleet was further enhanced with the very first generations X5 M (E70) and X6 M (E71).

After a special homologation was carried on the BMW M3 GTR (E46), the newly developed 4.0-liter, naturally aspirated V8 engine was premiered on the E92 M3 generation. The power pack was quite impressive, as the 8-cylinder managed to pump out no less than 420 PS (414 hp).

The E63 M6 series was continuing its mission as Safety Car, that started in the 2004 season. The new X5 M and X6 M were a sensation back in those days, with their immense output of 555 PS (547 hp) coming out of the 4.4-liter TwinPower Turbo V8 engine. 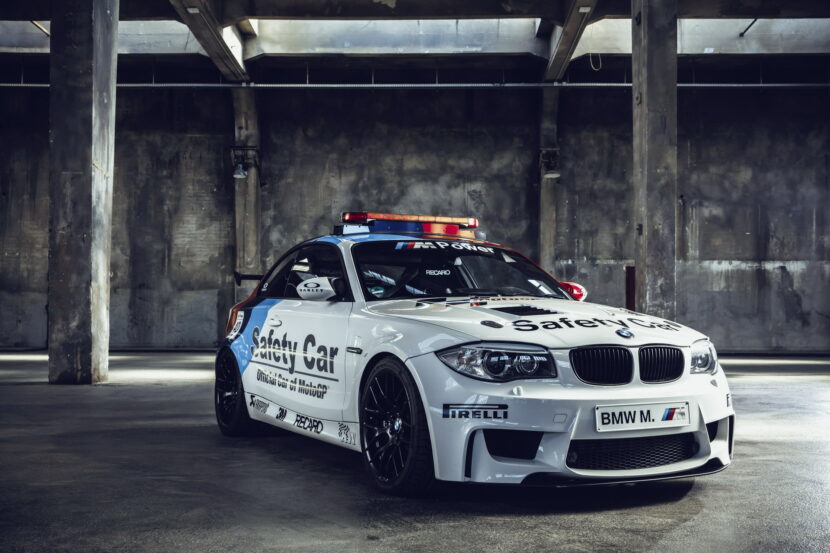 For the 2011 MotoGP, BMW brought its new 1 Series M Coupe to serve as Safety Car. The compact hot hatch is now a true classic and continues to impress with its outstanding dynamical performance.

Built on the E82 chassis generation, the 1 Series M Coupe will always be considered a true successor to the E30 M3 model series. BMW M used a new 3.0-liter, 6-cylinder engine equipped with twin-turbocharging and packing out 340 PS (335 hp).

The 1 Series M Coupe Safety Car was extensively modified to meet specific demands. It was equipped with polycarbonate windows, a titanium-made sport exhaust system, a rear-end spoiler to improve rear-axle grip and a high-performance brake system with 6-piston calipers.

The E70 X5 M and the E71 X6 M continued their duty in MotoGP and they were also joined in the game by the BMW 535i Touring and the BMW X6 ActiveHybrid. 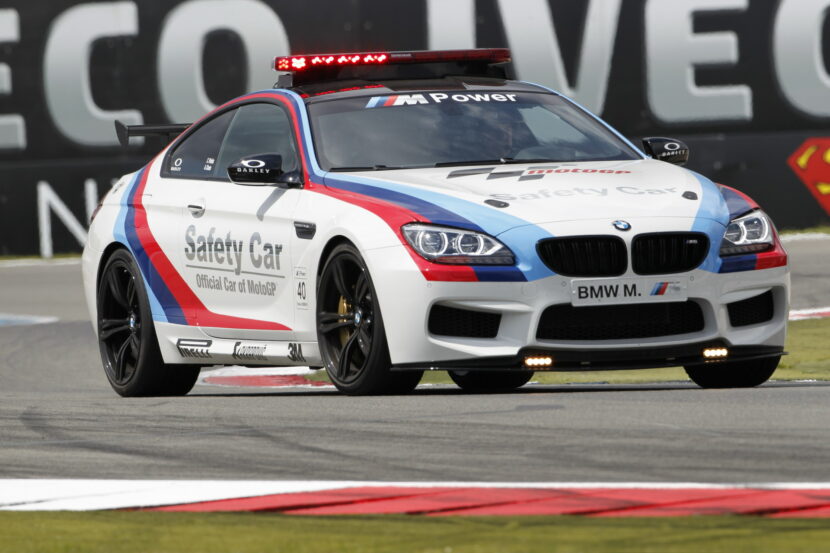 The 2012 season saw the introduction of a brand new fleet of full-fledge ///M models: the F13M M6 and the F10M M5 model generations. Both vehicle were powered by a new V8 engine, with a “hot inner V” configuration and a 4,395 cc displacement.

The M6 Coupe Safety Car was equipped with a new front splitter and carbon fiber spoiler at the rear end that improved aerodynamics. The fleet of Safety Cars for the 2012 season was further completed by the 1 Series M Coupe (E82), already in use since 2011. 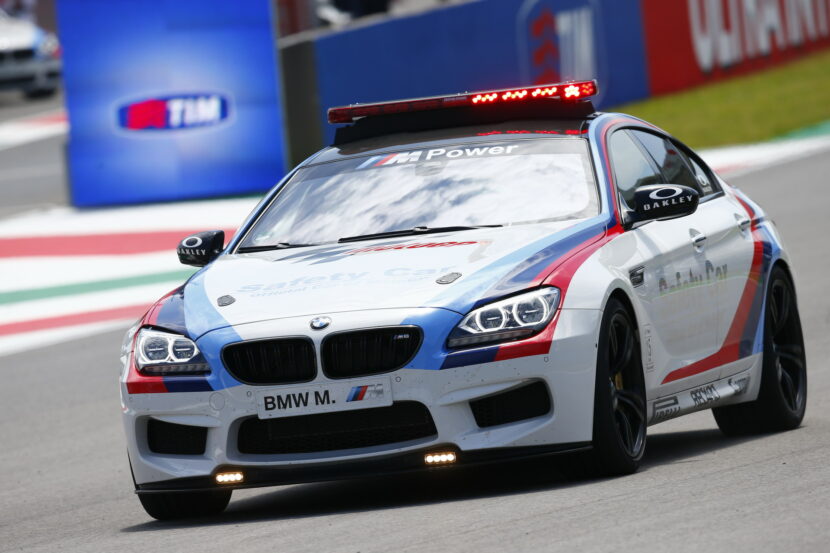 Time for renewal of the BMW M Safety Car fleet for the MotoGP tournament, as the brand deployed its new M6 Gran Coupe (F06M) to the track. The high-performance 4-door coupe used the same powertrain as the M6 Coupe (F13M) introduced in the 2012 season.

Of course, the new Safety Car needed additional tweaks and enhancements, as the special Recaro seats, the ceramic brakes and a new exhaust system.

The M6 Coupe continued its duty in the competition, alongside the M6 Gran Coupe. The Safety Officer was given a special, black-painted M3 Coupe (E92), while two units of the M550d xDrive Touring were used as Medical Cars. BMW Motorrad also supplied two specially equipped HP4 motorbikes to be used as Safety Bikes for rapid intervention. 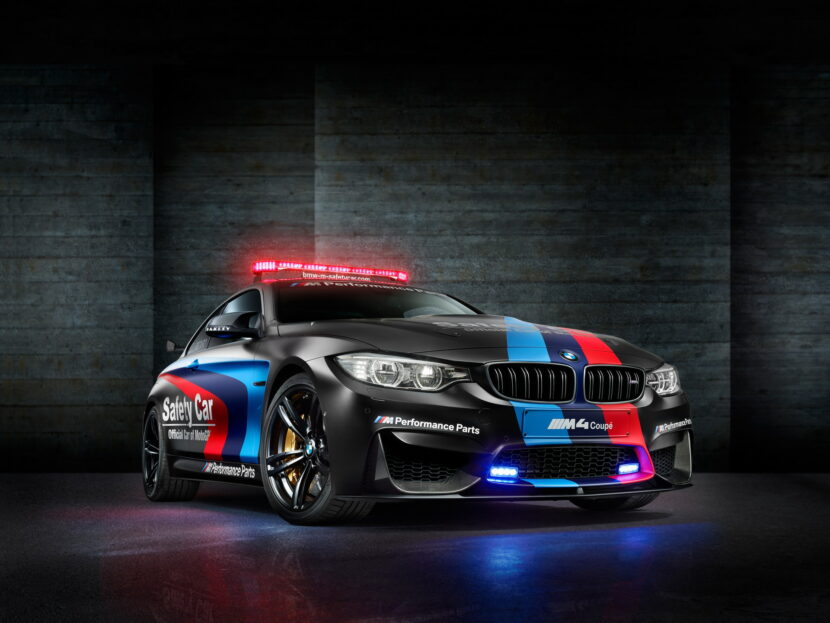 At the advent of the 2014 MotoGP season, BMW M introduced its brand new masterpiece, the M4 Coupe (F82), as Safety Car. The model can also be considered a test bed for the technical and powertrain upgrades that where to be used later on in the street-prone M4 GTS high-end model with a peak output of 500 PS (493 hp).

The 500 PS Safety Car was featuring an ingenious water-injection turbo system, which helped increase the maximum output and torque delivered by the V8 unit underneath the hood. M Performance Parts were also part of the equipment for this special M4. 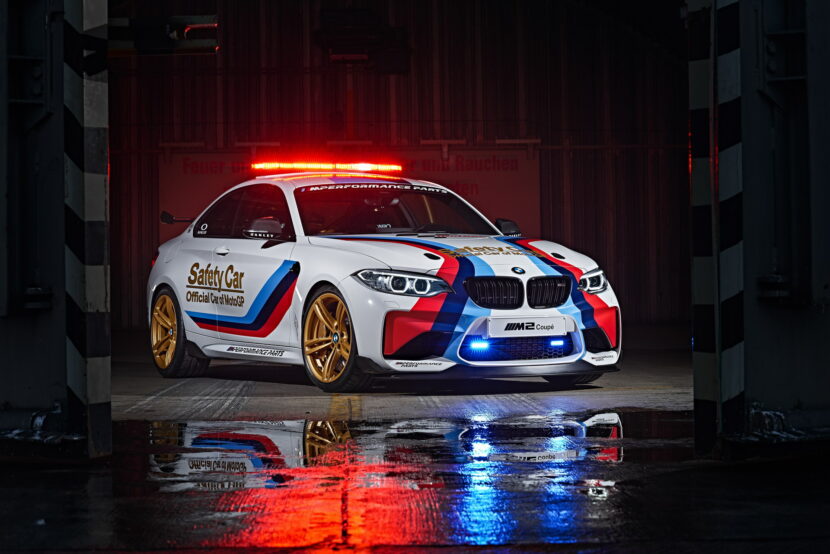 The 2016 season brought again a new change in the fleet of BMW M Safety Cars supplied to MotoGP. This time, the new M2 (F87) was entering the scene as a worthy successor of the enchanting 1 Series M Coupe (E82) used in 2011 and 2012 seasons.

The BMW M2 Safety Car was equipped with various M Performance Parts, had been mounted with a new rear spoiler, a cabin roll cage, a fire extinguisher, shell-shaped seats and a new performance exhaust system. The M2 also came with a new 3.0-cylinder I6 unit, entitled S55. The unit was rated at 370 PS (364 hp). 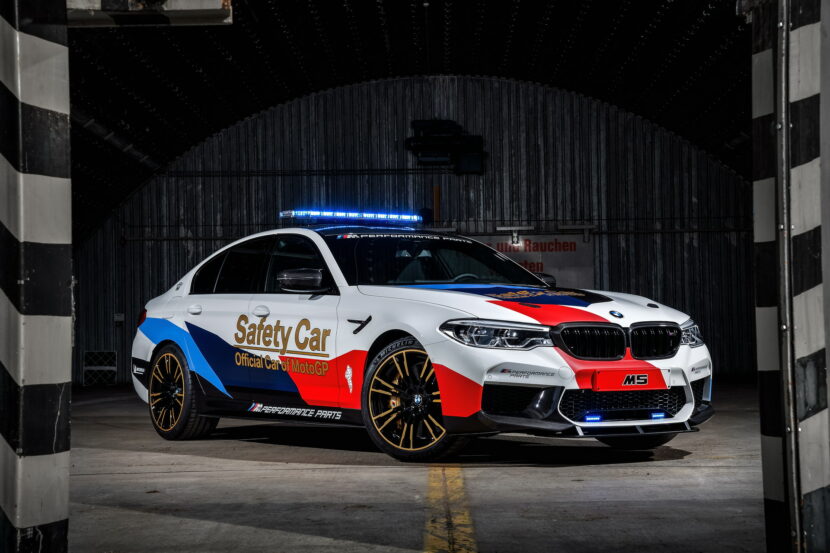 With the advent of 2018, BMW M has rolled off its all-new M5 generation (F90) in MotoGP as Official Safety Car of the competition. For the first time in history, the M5 was featuring an all-wheel-drive powertrain, thanks to the specially developed M xDrive chassis.

Other vehicles from the BMW fleet for 2018 season also included the M3 (F80) and M6 Gran Coupe (F06M) Safety Cars, as well as the X5 M (F85) used as Medical Car, the M4 Coupe (F82) deployed as Race Director Car, the M2 (F87) used by the Security Officer and 2 BMW Motorrad S 1000 RR Safety Motorbikes for rapid intervention on the track. 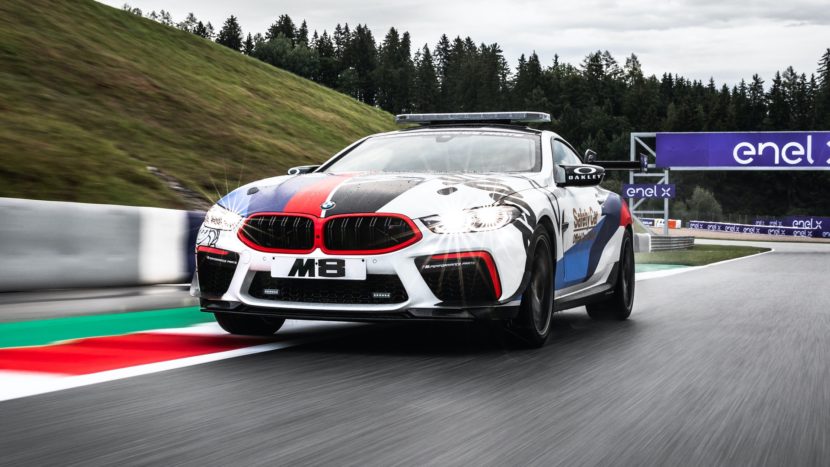 The latest M supplied as Safety Car for MotoGP is the outstanding M8 Competition Coupe (F93), the first generation in history. Beginning with the 2019 season, the 2-door M8 has been deployed in the tournament to ensure a high levelof track safety.

The BMW M8 Competition Coupe Safety Car uses the 4.4-liter V8 already in use in the M5 Competition. Rated at 625 PS (617 hp) and mated to an 8-speed M Steptronic gearbox, it helps the car rocket to 100 km/h in just 3.2 seconds. The chassis in fully AWD, thanks to the M xDrive system.

The M8 Safety Car is also equipped with a multitude of M Performance Parts and has been specifically enhanced for the tough jobs it has to accomplish in the MotoGP championship. Recaro seats are part of the equipment, as are the high-performance alloy wheels, the enhanced brake system, the new exhaust system and the cabin roll cage. 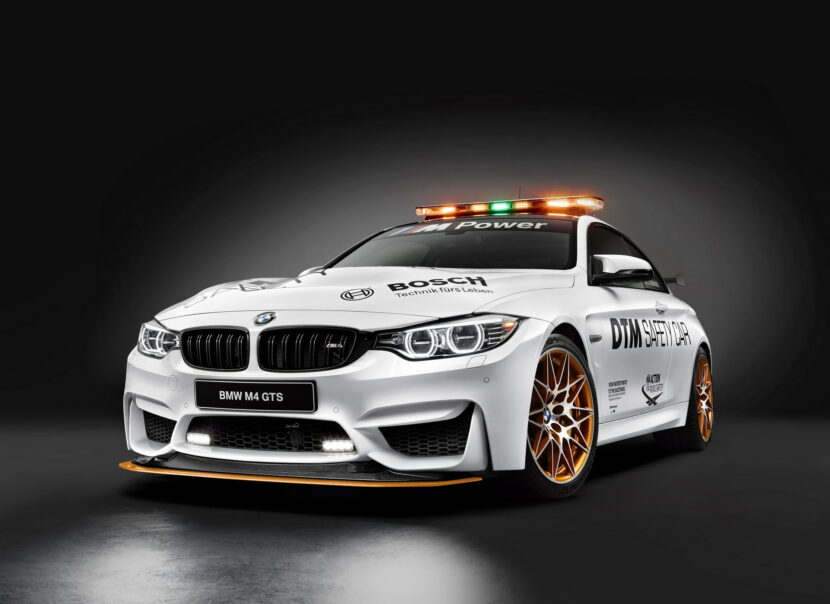 BMW has also entered as Official Safety Car and vehicle provider in the Formula E since 2014, lining up a complete host of dedicated vehicles. The Munich-based brand marked a first here as well with its plug-in hybrid safety cars, the all-electric race director car and PHEV medical cars. 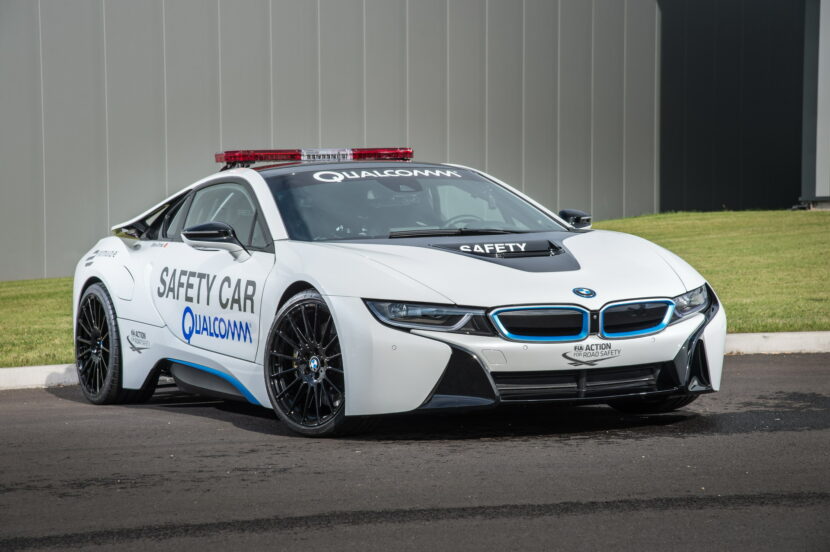 From the first year, BMW i8 Coupe (I12) became the competition’s Safety Car. The plug-in hybrid sports car is powered by the multi-awarded 1.5-liter, 3 cylinder petrol engine and an additional electric motor. The hybrid configuration boasts as much as 374 PS (368 hp) of peak output.

From 2019, BMW i marked another premiere in the field of safety car. The new BMW i8 Roadster (I15) joined the Formula E fleet of BMW Safety Cars, making it the first open-top model of its kind. 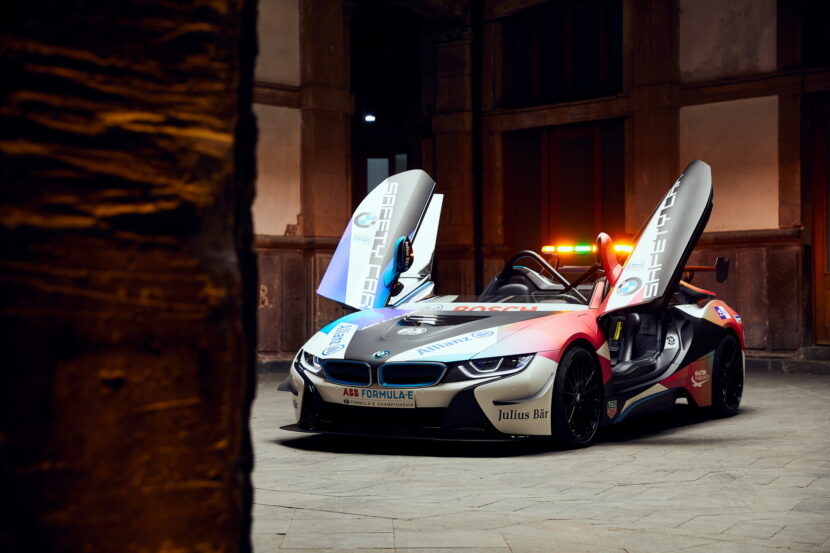 The PHEV roofless 2-seater features extensive chassis modifications, together with special aerodynamic modifications. The height of the windshield has been reduced, a new spoiler was mounted at the rear end, new M Compound carbon brakes have been installed and the ground clearance was shortened by 15 mm.

Together with the complete i8 Safety Car fleet composed of the Coupe and Roadster versions, BMW i is also providing the i3s (I01) all-electric vehicle as Race Director Car, the 530e plug-in hybrid as Medical Car and the X5 xDrive45e as Rescue Car. 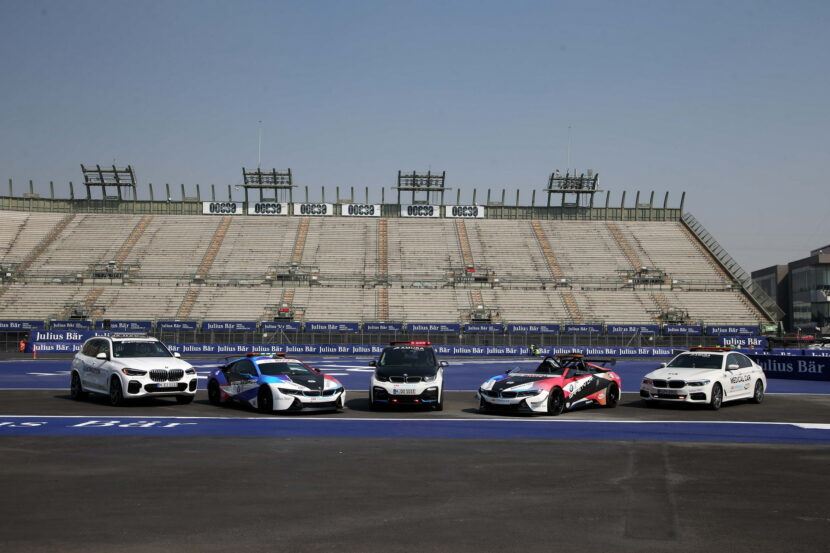 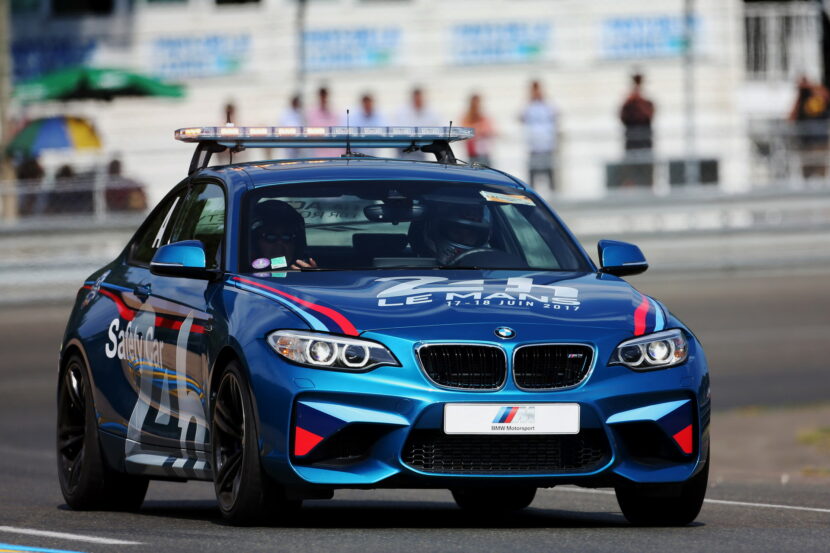