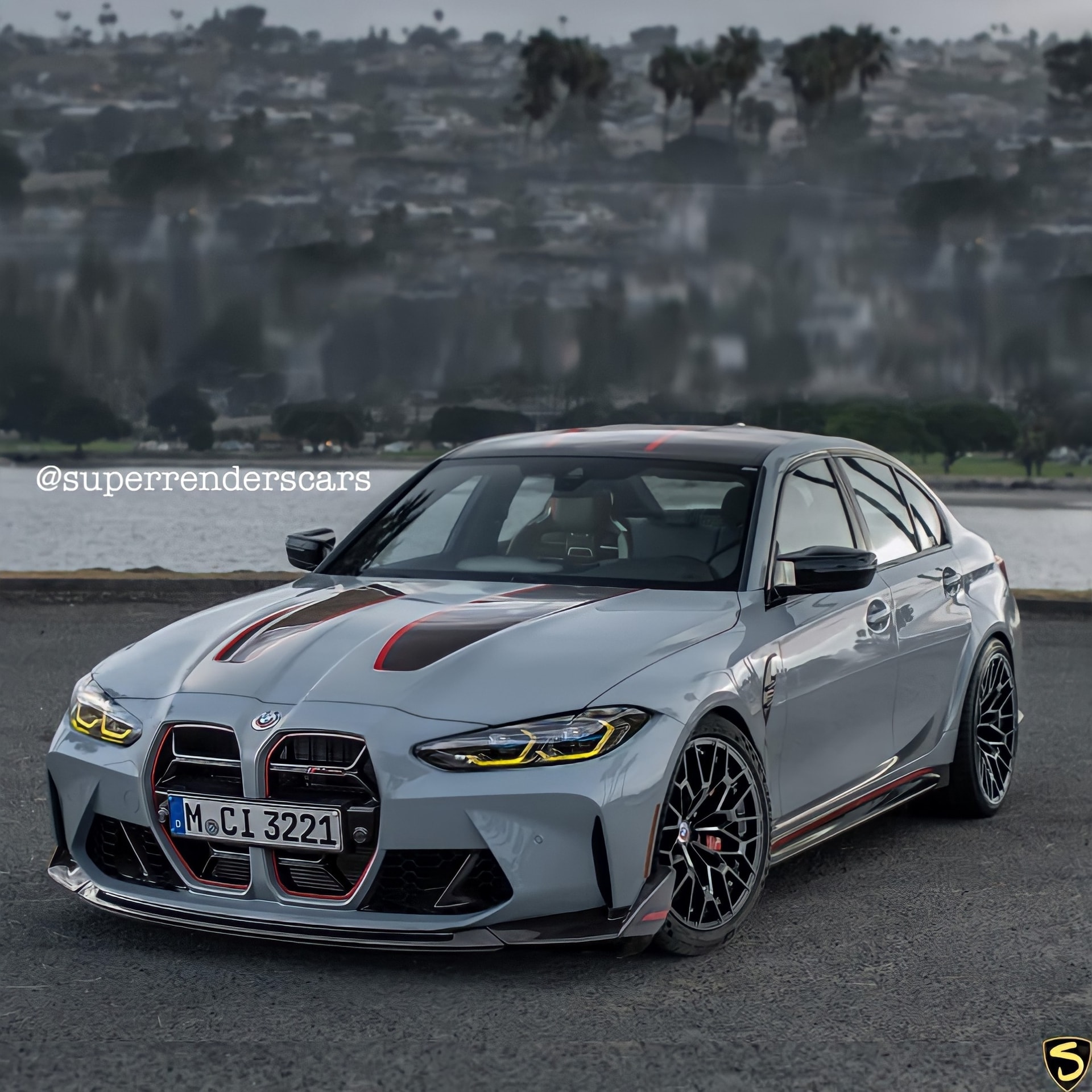 To this date, the original BMW M3 CSL is one of the most coveted BMW cars in the world. It was also the most outrageous car BMW had ever made at the time. It was the first BMW to use a carbon fiber roof, it had an asymmetrical air intake in the front bumper, a stunning carbon fiber intake manifold, and a novel SMG automated-manual gearbox. Its 3.2 liter naturally aspirated inline-six made 360 horsepower and 273 lb-ft of torque. The E46 M3 CSL is widely regarded as the best-driving BMW of all time.

And while the BMW M3 CSL won’t live on, the first-ever M4 CSL will take over as the top sportscar of the M3/M4 family. The M4 CSL was recently unveiled before going on sale this year with a limited run of 1,000 units. So it comes as no surprise that new Photoshop images take the design cues of the M4 CSL and apply them on a fictional M3 CSL (G80). The render below uses the G80 M3 Competition as the starting point before applying CSL-like design cues.

At the front, this BMW M3 CSL features a unique kidney grille inspired by BMW Motorsport racing cars, paired with a full carbon fiber hood with functional vents. The M4 CSL yellow lights were also imported, as well as the aggressive and stylish front lip. Of course, the carbon fiber roof is a must, same as the CSL wheels and side skirts. The Frozen Brooklyn Grey metallic paint is also part of this M3 CSL render and it’s paired with red accents.

This fictional BMW M3 CSL could certainly be more powerful than the original E46 M3 CSL. It would use the S58 3.0 liter twin-turbocharged inline-six, making 543 horsepower (550 PS) and 479 lb-ft of torque. Just like the G82 M4 CSL, it would only get an eight-speed automatic, an upgrade over the E46 M3 CSL’s SMG. Like the M3 CSL that came before it, a G80 M3 CSL would break the BMW lap record at the ‘Ring. The new M4 CSL was recently clocked with a time of 7:20.2, obliterating the 19-year-old M3 CSL’s record.

According to our sources, BMW M has no plans to offer a new M3 CSL. But just like with the previous F80 generation, an M3 CS will arrive in 2023 and will serve as the top model of the M3 lineup. According to a source with a good track record, the 2023 BMW M3 CS will produce 540 horsepower, which puts it right below the 550 horsepower of the 2023 BMW M4 CSL. Furthermore, the BMW M3 CS G80 will allegedly be available only with the xDrive all-wheel system and will only use automatic gearboxes.