The holiday season is slowly coming to an end. Even though most of us probably didn’t take their customary summer vacation, time flies and here we are, in September, wondering where the sunny days have gone to. The pandemic forced many to stay indoors at home, and skip this year’s holiday, but that seemingly didn’t apply to the MINI Cooper SE Countryman. The plug-in hybrid Countryman went for a trip in what is known as ‘France’s Grand Canyon’. It came back with a full set of photos.

The area in question is located along the Verdun River along the south-eastern edge of Provence. This is the place where many enthusiasts come for some white-water rafting and you can see plenty of kayaks around here, just like the MINI Cooper SE Countryman is sporting in several pics. Squeezed in between Brittany and Cote d’Azur, the landscapes you encounter here are not easily forgotten.

The gorge is more than 20 kilometers long, with winding country roads wending their way through little villages and past popular panoramic viewing points. In summer, hosts of tourists with canoes and kayaks are on the lookout for somewhere to launch their boats and paddle along the turquoise-blue waters of the Verdun. It’s so beautiful and hidden away, it would be a shame to pollute it with CO2 emissions. Luckily, the Cooper SE Countryman is a plug-in hybrid and you can drive completely electric around these iconic roads.

A total of five barrages were erected between the 1920s and the 1970s in order to harness the waters of the Verdun River, supply the surrounding regions with water and generate energy with the assistance of hydro-power stations. The latest and simultaneously biggest of the reservoirs created in this way is the Lac de Sainte-Croix, which has developed into a popular getaway destination. The high fluorine content colors the waters turquoise blue and in summertime they warm up to reach pleasurable bathing temperatures. 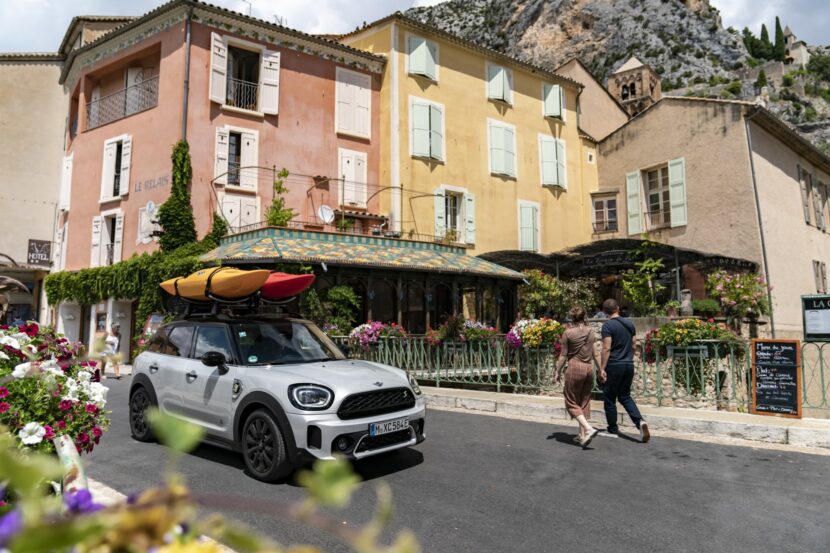 Water-sports fans who prefer a more leisurely approach are able to take a trip upstream from the lake into the Verdun Gorge and admire the steep, rocky walls soaring above from the vantage point of canoes and pedalos. Around 140 million kilowatt hours of electricity are generated each year by the hydro-power station of the Lac de Sainte-Croix, which is located behind a concrete dam 95 meters high.

The sustainably produced energy is fed into the distribution grid of the surrounding region. This means that the MINI Cooper SE Countryman ALL4 is able to recharge its lithium-ion battery with electricity generated from renewable sources during its evening stopover in Sainte Croix du Verdon. This way, you could enjoy the view emission-free.