The 3 Series lineup has received a Life Cycle Impulse for 2023, but the M3 is skipping visual changes for the time being. It means the sports sedan soldiers on with the same look while sharing the latest-generation infotainment system with the lesser trim levels. A fully fledged LCI is being worked on for the range topper and will arrive later this decade.

In the meantime, one desirable spec of the AMG C63 rival is currently exhibited in Munich at the BMW Welt. Displayed next to an M4 CSL, the 2023 M3 is a hotter Competition model with xDrive and is painted in what is arguably one of the most attractive blue shades in the business – Individual Daytona Beach Blue. The high-performance saloon is showcased with the anniversary roundels to mark 50 years since the M division was founded. 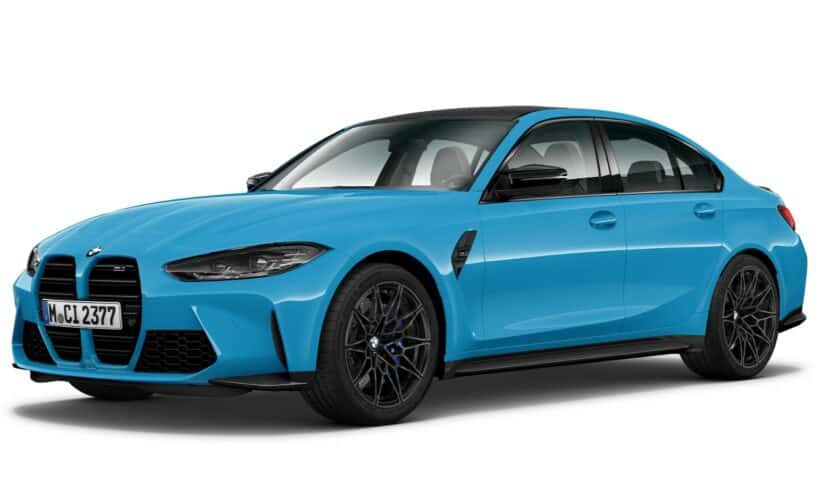 We’ll admit completely black wheels are not necessarily our cup of tea since they make the spoke design hard to see. In this case, it’s the 826 M set measuring 19 inches at the front and 20 inches at the rear. It also happens to have the optional M Carbon Exterior Package to contrast the eye-catching blue color. To contrast the exterior, the 2023 M3 has been configured with an Individual interior, namely the full leather Merino in Ivory White.

Those looking for a step above the Competition variant are looking forward to seeing the M3 CS early next year. It too will come exclusively with an automatic transmission, and customers will also have no other way but to get the limited-run special edition with all-wheel drive. It’s expected to have a little bit more power and a little less weight, but the changes won’t be as radical as they were for the M4 CSL. The latter lost its seats whereas the M3 CS is believed to retain the rear bench, and we’ve heard it’s not even getting bucket seats like the M5 CS had.

Enthusiasts have plenty of time to buy the M3 G80 considering BMW has extended the life cycle of the 3 Series and will produce the G20 until early 2027. The facelifted M3 is likely due around the middle of the decade, certainly after next year’s spicy CS.