A diesel performance vehicle on the dawn of the electric era might seem like a relic, but BMW knows some parts of the world – especially Europe – still appreciate the low-end torque and excellent fuel efficiency of an oil-burner. Contrary to rumors that had stated BMW would discontinue the M340i and M340d for the 3 Series LCI, the six-cylinder versions are alive and well in non-M guise.

The M Performance 3er is starting to arrive at dealers across the Old Continent, such is the case here with an M340d Touring LCI in the United Kingdom at one of Dick Lovett Group’s showrooms. Finished nicely in Brooklyn Grey Metallic, the speedy diesel wagon rides on 19-inch alloy wheels in Jet Black contrasted by the red brake calipers. 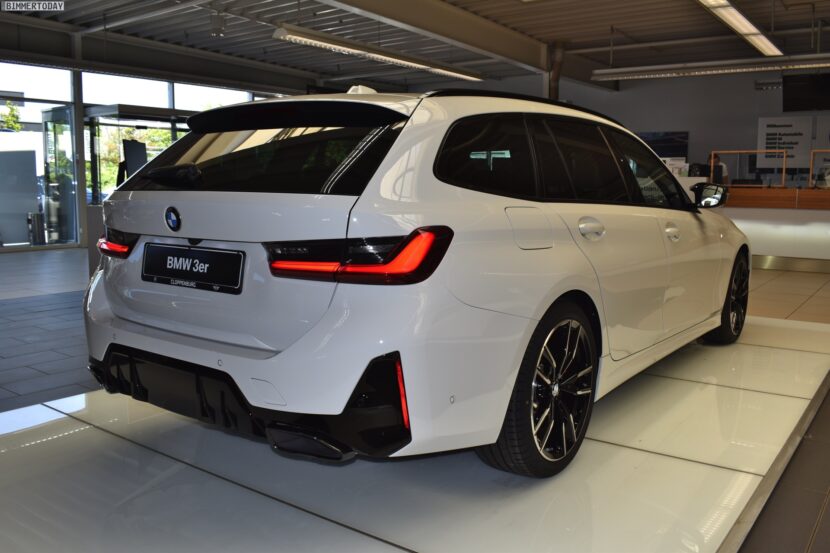 With the Life Cycle Impulse, BMW has added the option to order the M340i/M340d with a carbon fiber roof, but it’s only available for the sedan. With this being the estate, it gets a panoramic sunroof. M3-esque side mirror caps are also new with the LCI, and they’re finished in glossy black to go along with the other dark accents.

We get to see how the facelifted 3 Series looks with the official BMW tow bar, and as with all of the company’s wagons, you can open the rear glass independently of the tailgate for quick access to the cargo area. Much like the i4 but not the 4 Series Gran Coupe, the LCI comes along with the Operating System 8 with a 14.9-inch touchscreen taking center stage on the simplified dashboard with no more physical controls for the climate settings.

This M340d Touring in right-hand drive plays it safe with the interior theme as it was ordered with a black Dakota leather upholstery with grey stitching. It’s been configured with the Harman Kardon surround sound system, a heated steering wheel, and other goodies.

As you might have heard, the G21 is sticking around for a while, with the latest intel suggesting production won’t end until early 2027.