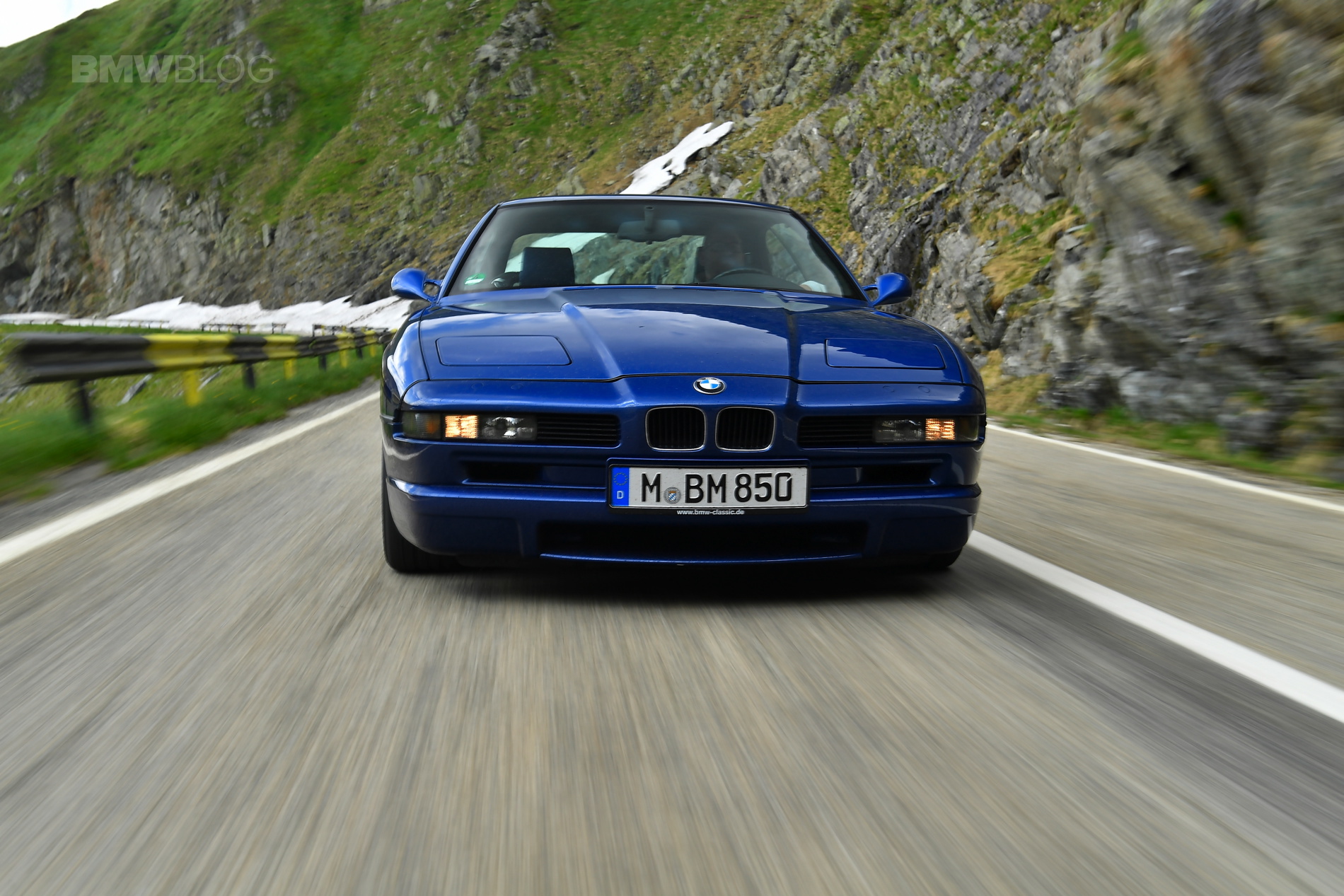 The current BMW 8 Series, while arguably suffering from an identity crisis, represents the cutting edge of what BMW can offer – the newest technology, the most power, the finest luxuries, and of course, the highest MSRP. So, why then, did someone decide that this 8 Series from 1995 is worth even more than an M8 Competition, the “best” modern 8 Series money can buy? 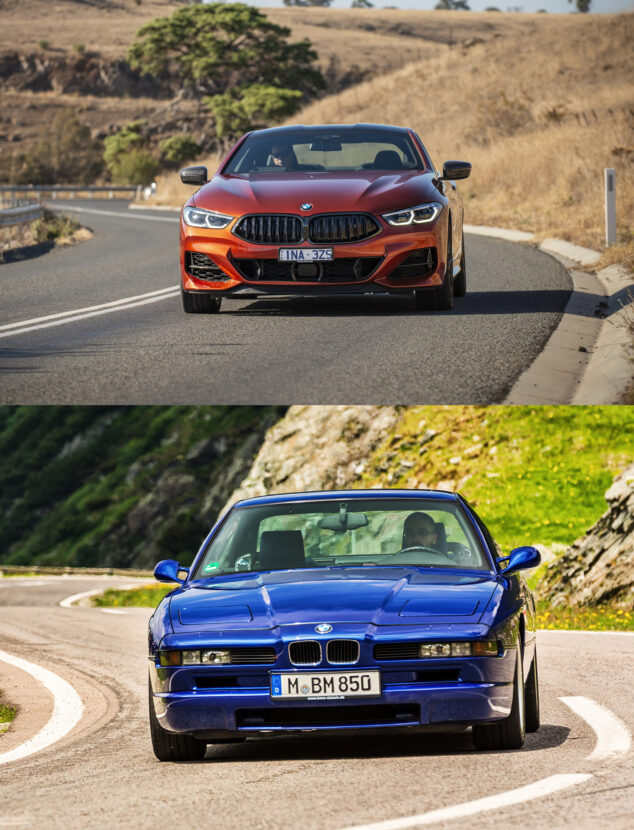 Let’s identify the contenders here: in the retro corner, EAG’s euro-spec, incredibly rare Tobago Blue 850CSi, offered in “Euro Spec”. Hot on the heels of the record-breaking sale on Bring a Trailer, EAG has come up with something arguably even more special.

While beautiful, the BaT car presents in a fairly pedestrian Arctic Silver Metallic, over grey two-tone leather. EAG’s car is finished in beautiful (and rare) Tobago Blue, with a matching blue and black two-tone interior that draws parallels to the desirable E39 M5 “sport” interior. 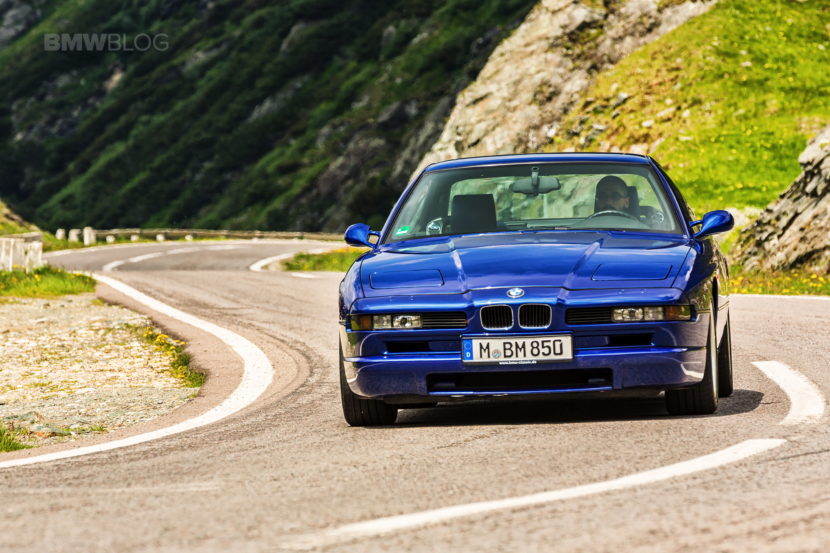 Being a European spec car, it also receives a standard black trim – replacing the wood trim present on the silver car. Every 850CSi made is equipped with a six-speed manual paired to the S70B56 V12 engine.

Old BMW heads will recognize the S70 engine denotation as important for two reasons: for one, it has received an “S” engine code, assuring that BMW’s Motorsport division had a hand in development. The second reason – the S70 (in a much different form) ended up in the famed McLaren F1 and BMW’s V12 LM cars (S70/2, and S70/3, respectively).

Talk about an extended family.

In the new school corner, let’s go with what nearly $150,000 gets you today from BMW. You can’t build a 2021 M8 coupe right now, since production has been suspended for the current model year. But if you could, you’d end up with a 617 hp, twin turbo V8 monster.

The S63 engine powers all four wheels through a quick shifting ZF-sourced 8 speed automatic transmission. On top of that you have configurable RWD, a 0-60 time that belittles some of its “sports car” constituents, and massive 275/35 and 285/35 tires at the front and rear, respectively.

Furthermore, the M8 gets a bunch of advanced tech, like impressive Bluetooth connectivity and voice commands, and even some trick cameras and sensors that allow the car to drive itself in traffic and park itself. Also, it runs on the tears of Tesla owners and in early emissions testing, only emitted solid gold bars.

I probably should’ve double checked that last part. Regardless, the old 8 Series gets a cassette holder, so, they’re about even.

The fight, and some backstory

From a performance standpoint, it’s clear the new M8 is quite the ringer. The new 8 is faster, more aerodynamic, and at first glance does all the “performance car” things more correctly. But since the vast majority of us aren’t Dominic Toretto, what happens after you’re living life a quarter mile at a time?

Well, the 850CSi gets a manual transmission, so that certainly makes the drive just a little bit more rewarding. Usable power (as far as what you’ll use most of the time) on the cars is, realistically, very close. A naturally-aspirated V12 is a lot more novel than a twin-turbo V8 these days, so I’m going to give the “sound” award to the older car, too.

The old car weighs a bit less than the new one as well, tipping the scales at just a bit above 4,000 lbs, while the new one is, conservatively, about 500 lbs heavier. Arguably, both are a bit heavy but at least the 850CSi is trying. 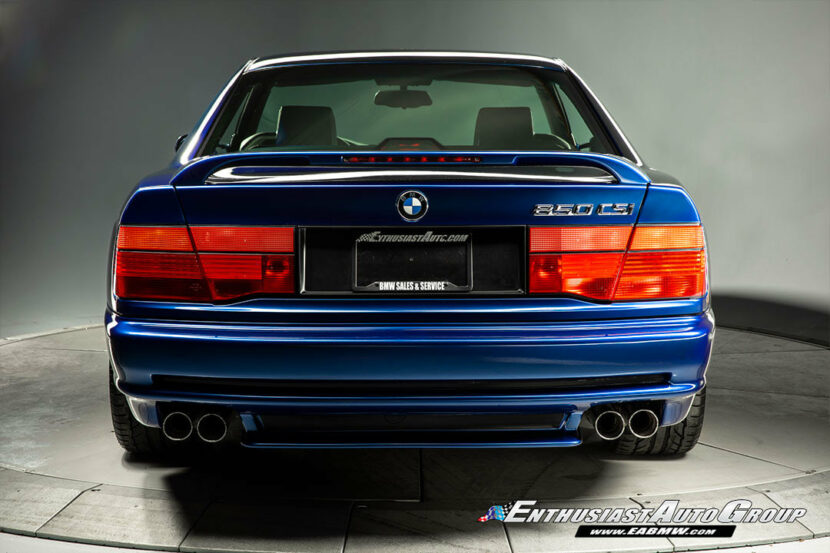 Furthermore, EAG’s Euro-spec car even received an early version of BMW’s all-wheel steering system, dubbed “Active Rear Axle Kinematics”, or ARAK. There’s a fascinating and extremely technical article about it elsewhere on the Internet if you have the time, but here’s the condensed version.

The suspension was designed from the ground-up with the idea that high G forces are exerted on the suspension and wheels during performance driving, mostly predictably. This system was designed to counteract those forces intuitively.

In conjunction with the natural weight transfer that happens when making high-speed steering corrections at speed, and the natural flow of air at speed, BMW’s integral rear axle design allows the suspension to electro-hydraulically “auto-correct” and point the rear wheels in a more aerodynamic and precise manner, reducing oversteer and maintaining predictable handling, based on those external factors.

On the racetrack, this allows for a smoother power out of the apex and enhances stability through the corner’s exit, and more precise turn in at speed. Cars equipped with this system repeatedly bested their lesser-equipped counterparts during preliminary testing around the Nordschleife.

Not bad for the 1980s, which was when this system first started R&D procedures. 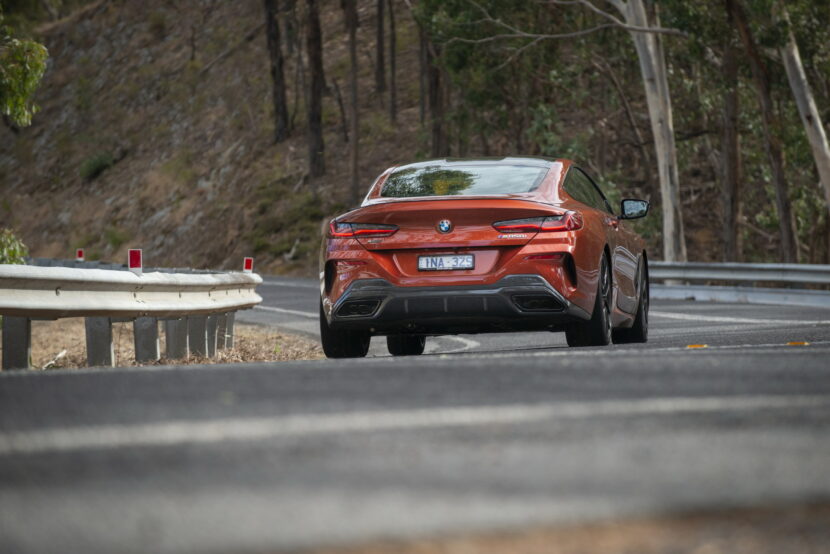 In a bit of an ironic twist, the new 8 Series also offers available four-wheel steering – but not on the range topping M8. Still, the M8 receives all the traditional driver assists that made the aforementioned engineering eventually obsolete. Namely, ASC+T (Auto Stability Control + Traction) and anti-lock braking systems.

An important distinction is that ARAK allows for less intrusion into the power delivery, focusing primarily on suspension movement and air flow, whereas the newer, more cost-effective models meter power based on braking input and limiting engine power. All things equal, an experienced driver will generally be faster around a track with the ARAK system than with the new-age nannies.

Read Also: There Won’t Be 2021 BMW M8 Coupes or Convertibles Due to Dealer Backup

But the bean counters won, and with the cost of implementation lower (and eventual move to electronic power steering), the expensive ARAK system gave way to ASC+T and the like. Another almost prophetic example of cost cutting measures impacting the driving experience.

This one’s a bit difficult. The current M8 is mostly a hit, with most praising its wide hips and generally slippery-looking design. OEM wheel options are good, and the interior is well appointed and still feels like an event. However, some people think it’s a Mustang.

We’ll give it an 8/10 here. Interior options are nice, and it even gets a Night Blue over Ivory option that looks a lot like the old 850CSi interior, but with a little brighter color. It isn’t bad, but…have you seen EAG’s car? 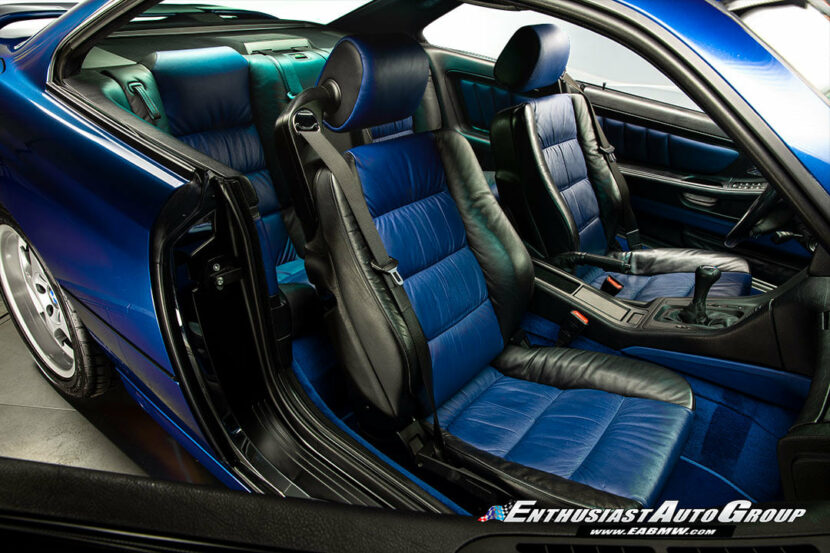 The 850CSi EAG offers one thing: panache. The pop-up headlights, the quad exhaust (as far as I know, the first BMW stateside to offer that), the pillarless doors, and a blue interior?! Where do I sign?

Mostly analog controls inside represent the best of the mid-90s, but it does have the little on-board computer that happily asks you if you remembered to turn off your headlights, and will even offer up error messages and return statistics like fuel economy and outside temperature. SCIENCE!

The Votes Are In

I’ll go out on a limb here and say my target audience agrees with me – the old 850CSi is an irreplaceable piece of history and EAG’s Tobago Blue car will absolutely be worth every penny it commands when it does sell – even if it’s above the massive MSRP of the new M8.

The thoroughbred S70 V12 underneath the hood alone solidifies the 850CSi’s place in the pantheon of driver’s cars. Paired with a manual transmission, unmistakably vintage (but good) looks, rare color combination, and an obscure four-wheel steering option most never knew existed, and you’ve got more or less a sure bet on appreciation.

Though the current M8 may be on its way there too, especially with production being cut for 2021, it still won’t ever get a manual transmission and effectively remains the same car as the F90 M5 underneath the sheet metal – reducing collectability and diminishing the “specialness” there.

Don’t get me wrong – I wouldn’t daily either of these cars. The 850CSi is clearly too valuable, and the M8 is entirely too much car for me. But as a weekend driver, or seventeenth car, or even (ugh) as an appreciating asset – I’d put my money on the 850CSi every time.

Every day we near the realization of a brave new world of hybrids and EVs – one that wasn’t even a hungover morning – after thought when the original 8 came to production. And that only solidifies the 850CSi’s place as an idol to the elements that helped make BMW the ultimate driving machine.