BMW is putting the finishing touches on a Life Cycle Impulse for the X5 and sources from within Munich claim production of the LCI model will start in April 2023. That can only mean an official reveal is coming soon, possibly early next year. In the meantime, a near-production prototype has been spotted in Germany while being unloaded from a car trailer.

Unlike the X7 LCI with its split headlights, the X5 won’t be radically restyled. Peeking through the camouflage are one-piece lights that seem to have sharper LED daytime running lights. The clusters could be a tad slimmer and flank a kidney grille that doesn’t seem to be any bigger than it is today. Moving at the back, fresh graphics for the taillights poke through the disguise. 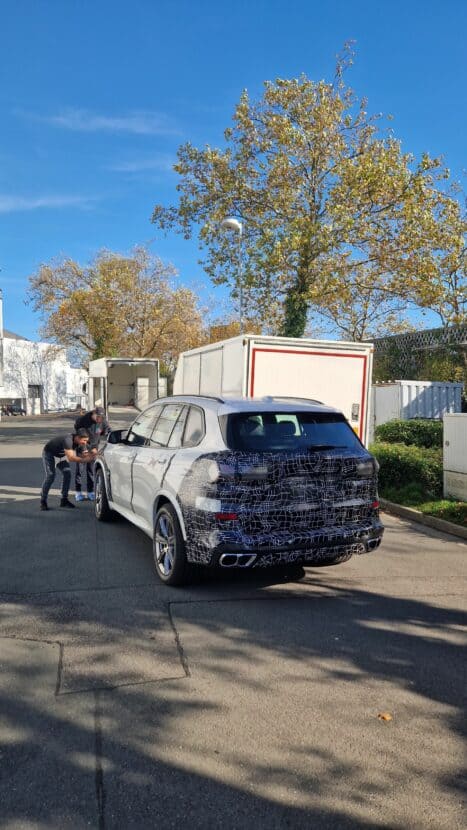 The quad exhaust design is undoubtedly the most interesting bit because it reveals the prototype’s true identity. We believe it’s an X5 M60i since the four tips are identical to those of the X7 M60i. The fullsize SUV in M Performance guise used to share the same design of the exhaust with the equivalent X5 but switched to a new look when it transitioned from the M50i to M60i suffix.

At the heart of the 2023 X5 M60i will be the same newly developed “S68” engine powering not only the X7 M60i, but also the XM and the latest 760i. The mild-hybrid V8 with a 4.4-liter displacement and a pair of turbochargers will also be installed in the full-fat X5 M. Needless to say, the equivalent X6 versions will also transition from the current N63 and S63 engines to the electrified powertrain.

Quad exhausts aside, there is another obvious clue we’re dealing with the M Performance model. We’re talking about the new mirror design meant to mirror (pun intended) the actual M version. The X5 M60i won’t be the first to do so since the M340i/M340d LCI also have the side mirror caps of the actual M3.

When the facelifted X5 debuts a few months from now, it’s certainly going to have BMW’s iDrive 8 with the dual-screen layout.