Picking up where the V12 LMR left off, the M Hybrid V8 marks BMW’s return to top-tier endurance racing. It made its public debut in North America last month at the Petersen Museum in Los Angeles and here we can see the electrified beast in all of its glory while stretching out at Road Atlanta. Four and a half minutes of fast-paced action. While some rivals have decided to go with six-cylinder engines, BMW Motorsport’s flagship vehicle will have a larger V8.

Styled by BMW Group Designworks in Los Angeles, the M Hybrid V8 features the widest application of the kidney grille we have ever seen on a BMW, be it a road or race car. The competition debut is locked in for late January 2023, but in the meantime, there’s a lot of testing that needs to be done. While next year will be all about the GTP class of the IMSA WeatherTech SportsCar Championship, it’ll also compete at Le Mans in 2024 as part of the confirmed FIA World Endurance Championship entry. 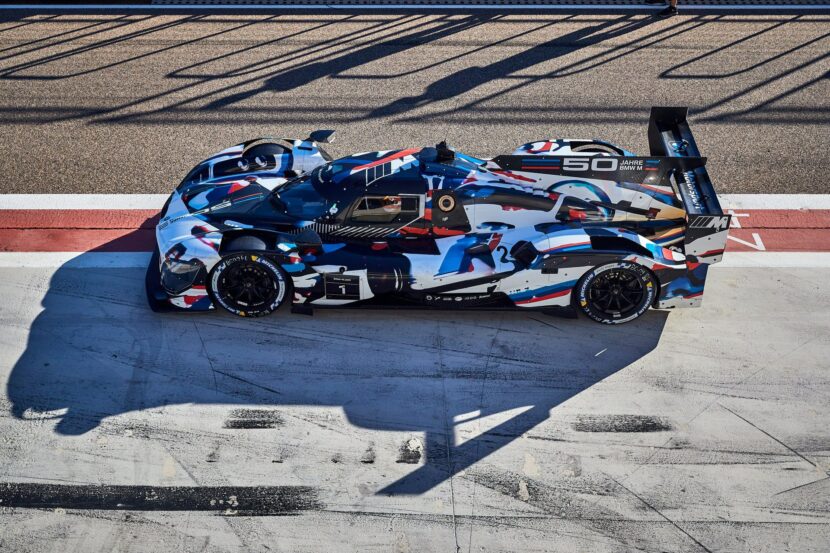 The 4.0-liter engine you’re hearing is not totally new. It traces its roots to the 2017/2018 M4 DTM but with a twin-turbo setup instead of a naturally aspirated configuration. Codenamed P66/3, the combustion engine is good for 640 hp and 650 Nm (478 lb-ft) of torque and can rev up to 8,200 rpm. Per regulations, the ICE (including turbo and exhaust) must weigh a minimum of 180 kg (397 lbs) and is hooked up to a seven-speed Xtrac gearbox.

The M Hybrid V8 filmed at Road Atlanta has the initial livery celebrating 50 years of M rather than the race-ready look we saw a few weeks ago. BMW M works drivers Connor De Phillippi (USA), Philipp Eng (AUT), Augusto Farfus (BRA), and Nick Yelloly (GBR) have been confirmed to get behind the wheel of the endurance race car.