The third-generation X1 is shaping up to be another huge commercial success for BMW, especially now with more customization options than ever. This specification keeps things relatively simple by going for the all-black look both inside and out. We’re dealing with the top diesel version available upon launch, the xDrive23d, fitted with the optional M Sport Package. It’s painted in Sapphire Black Metallic, complemented by the Shadowline upgrade that blacks out the kidney grille.

Because the new X1 has been substantially enlarged for the U11 model, those 20-inch wheels don’t seem like overkill. As a matter of fact, the M Performance Parts catalog also includes even bigger 21-inch alloys for those willing to go all out. Gone are the days of the E84 era when BMW’s entry-level crossover was considered by many as the ugly duckling of the lineup. We’d argue the revamped model looks sophisticated, at least on the outside, particularly in a more expensive spec such as this one. 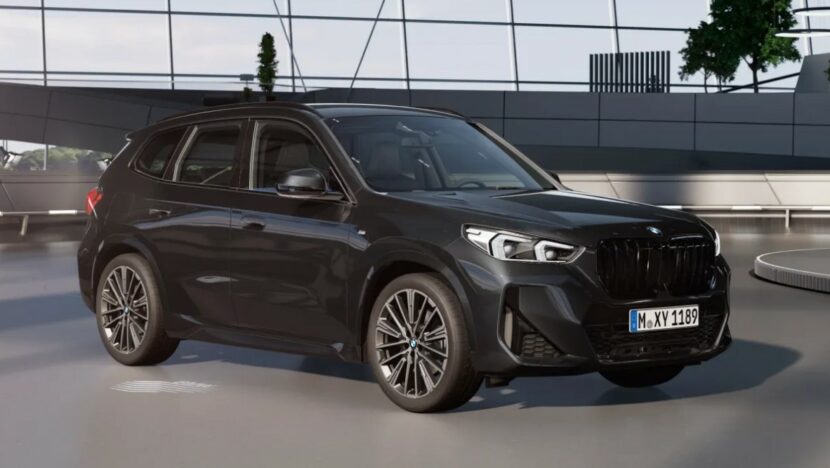 The interior has received a lukewarm reception because aside from the side-by-side screen setup sticking out from the dashboard, the iDrive controller is no more. The 2023 X1 takes the “less is more approach” with the layout since the switchgear has been reduced to a minimum. That’s not to say Bavaria’s baby crossover lacks features as the new generation has all the goodies you could ever want in this segment, and then some.

From an electric sunroof and tailgate to a Harman Kardon sound system and adaptive full-LED headlights, the X1 can be configured with lots of toys we usually associate with bigger SUVs. It’s also more practical than ever before following the growth spurt and comes with a wide array of powertrains: gasoline, diesel, plug-in hybrid, and the purely electric iX1.

With this being an xDrive23d model, it means there’s a turbodiesel 2.0-liter engine underneath the hood. The four-pot mill delivers just under 200 horsepower and 400 Newton-meters (295 pound-feet) of torque to both axles with help from a seven-speed, dual-clutch automatic transmission. BMW says it needs 7.4 seconds to reach 62 mph (100 km/h) from rest and maxes out at 140 mph (225 km/h).

The whole package comes at a price since the X1 featured here costs over €60,000 in Germany, which isn’t exactly cheap for what is essentially BMW’s entry point into the X lineup.