Nearly a week has passed since BMW stunned its audience with the XM, a new flagship SUV and the first M model with a plug-in hybrid powertrain. Combining a bold exterior with a fancy cabin, the dedicated M vehicle is for those who want an upgrade from the X5 M / X6 M Competition. The electrified luxobarge featuring an unconventional two-tone look is on display in Munich at BMW Welt.

Originally seen earlier this year on the new X1 compact crossover, Cape York Green is also available for the XM. Much like in the official images, the new shade is combined with flashy gold accents noticeable on the oversized kidney grille and the 23-inch wheels. BMW also used this striking color for the XM badges at the front and rear as well as on the sides.  To make it stand out furthermore, the Bavarian marque blacked out the wheel arches, M mirror caps, and some parts of the bumpers. 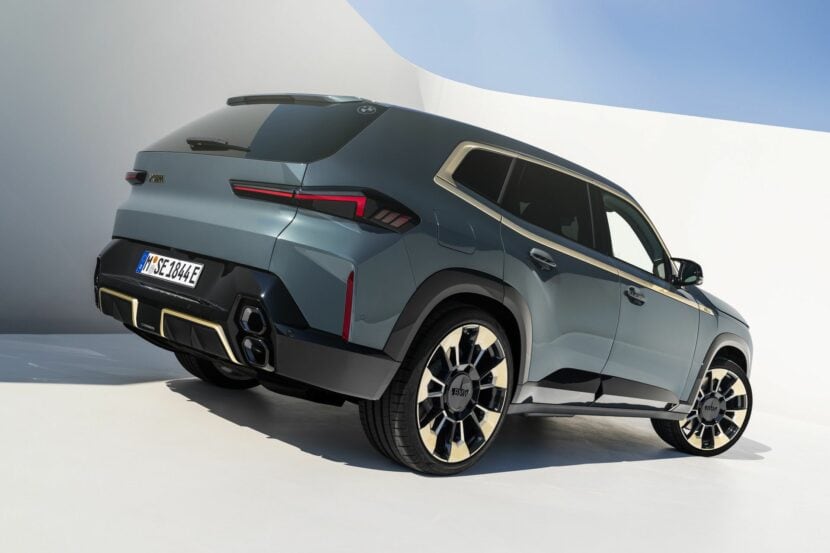 It’s certainly a sight to behold and looks more eccentric than other heavyweight players in the SUV segment like the Aston Martin DBX, Lamborghini Urus, and the Ferrari Purosangue. BMW may be more mainstream than those brands, but it’s aiming to lure in affluent buyers with its pricey XM. Indeed, the Label Red coming later in 2023 will carry an exorbitant starting price of more than $185,000. Even the base model kicks off at $159,000 or approximately $45,000 more than an X6 M.

The XM is based on the same CLAR platform as the larger BMW vehicles, but the M division has made enough changes to warrant the status of a dedicated model. It’s the first since the M1 of the 1970s, and while it’s sadly not the mid-engined supercar some had hoped, it has higher chances of being a commercial success given today’s SUV-hungry market. The company expects the United States, China, and the Middle East to generate the most volume.