The M760i is dead… long live the M760e? That’s what BMW had in mind when it transitioned the 7 Series to its seventh generation. The G70 bids adieu to the majestic V12 engine the fullsize luxury sedan had with every iteration since the E32 launched in 1986 when it was the first twelve-cylinder passenger car from a German automaker since World War II.

BMW appears to be dead set on presenting the 2023 7 Series with a two-tone paint and this M760e on display in Munich at BMW Welt combines Dravit Grey with Sapphire Black. As a matter of fact, the car’s spec is identical to the one featured in the official imagery released earlier this year when the G70 was unveiled. It rides on 21-inch wheels that also have a bicolor finish and come along with an M emblem you’ll also notice on the brake calipers. 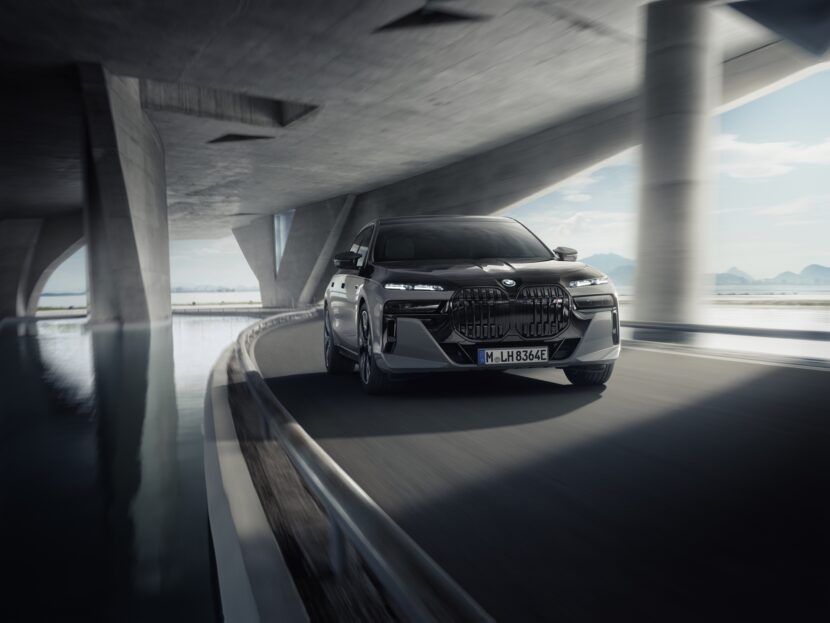 The M760e ushers in a new quad exhaust design for the tips, different than the stacked layout of the XM. A subtle trunk lid spoiler denotes it’s the sportiest 7er of the bunch, but lest we forget the most powerful of them all will be the i7 M70 coming next year with no fewer than 660 electric horses. In the meantime, the M Performance plug-in hybrid will have to suffice with 571 hp (420 kW) and 800 Nm (590 lb-ft).

Changing the letter “i” with “e” from one generation to another has halved the number of cylinders. The M760e uses an inline-six paired with an electric motor. It’s still properly quick for such a large and heavy car, needing just 4.3 seconds to hit 62 mph (100 km/h) from a standstill. BMW says the stately performance sedan will complete the 50 to 75 mph (80 to 120 km/h) task in a mere 2.7 seconds.

For short trips around town, you might not even need the combustion engine. Courtesy of a lithium-ion battery pack with a usable capacity of 18.7 kWh, the M760e can cover as much as 53 miles (85 kilometers) without sipping any gasoline. However, even though the WLTP cycle is more realistic than the old NEDC, hitting those numbers will prove to be a challenge in the real world.