The seventh-generation 3 Series was launched near the end of 2018 and went through a Life Cycle Impulse a few months ago. Except for the M3, all versions of the G20 received redesigned bumpers, a slightly different grille, and sharper adaptive LED headlights. The range-topping model did get the iDrive 8, but not the full-on LCI rumored to arrive later.

A new video shot at a BMW dealer in Bratislava, the capital and largest city of Slovakia, puts the spotlight on the closest thing to the M3. We’re talking about the M Performance version, which soldiers on for 2023 in both M340i and M340d flavors. Seen here is the former, which has the same inline-six engine as before, albeit with a mild-hybrid 48V setup.

It’s far from being a standard M340i since it has been configured with quite a few options, increasing the sticker price to €87,874. The sports sedan comes painted in M Brooklyn Grey and sits on the larger 19-inch black alloy wheels (codenamed 791 M). You’ll also notice the anniversary roundels on the hood, trunk lid, and wheels to celebrate half a century of the M division. They’re available until the end of the year on all BMWs equipped with the M Sport Package, so by extension, the M Performance and the fully fledged M cars as well. 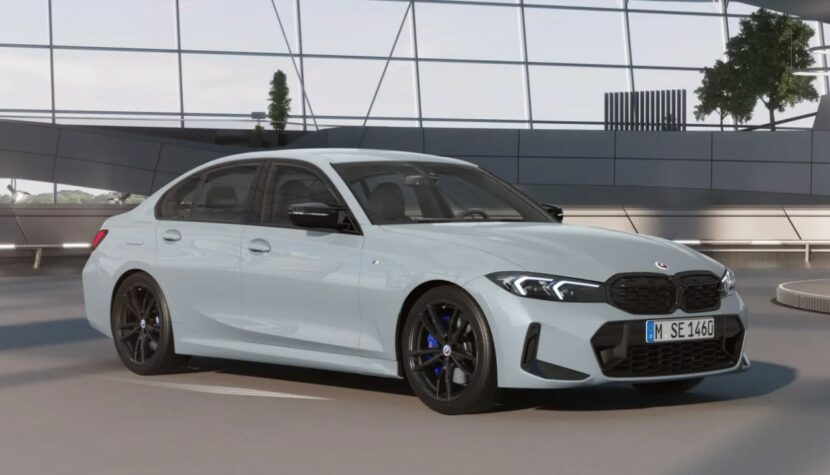 Another upgrade on the outside is represented by the Shadowline, which blacks out certain parts of the body. The most obvious component would have to be the kidney grille, now featuring a different pattern with wider honeycombs for the LCI model. Another subtle change brought by the facelift is the switch to M-like side mirrors, painted black as well. Not featured on this particular car is a carbon fiber roof available on the M340i for the first time.

Eagle-eyed viewers have spotted the M Performance Parts in glossy black, including the side skits, trunk lid spoiler, front bumper lip, and rear “M340i” badge. The Shadowline treatment extends onto the taillights, which have been virtually carried over from the pre-LCI model. Inside, the new infotainment takes center stage, but there’s also a small gear selector now. M colors on the seatbelts spruce up an otherwise predominantly black cabin.

Overall, the M340i takes the evolutionary route by getting the latest iDrive while receiving discreet design tweaks. BMW is reportedly planning to keep the G20 on sale until 2027 and give it another LCI until then, with rumors suggesting it’ll take place in mid-2024.