Say what you will about BMW’s obsession with SUVs and some of its questionable design choices, but it still knows how to make a handsome sedan. The 3 Series went through a Life Cycle Impulse earlier this year that didn’t rock the boat too much as the changes on the outside were subtle. Seen here is what many consider the pick of the range, the M340i, which hides its six-cylinder power behind a normal front grille.

The sports saloon in question is the xDrive model finished in Black Sapphire Metallic complemented by the dark kidney grille and optional black 19-inch wheels. For a splash of color, the brake calipers come in red and the car was configured with the 50 years of M anniversary emblems. With the LCI, the M340i received M-styled side mirrors as well as the slimmer and sharper-looking headlights installed on the lesser 3er versions. 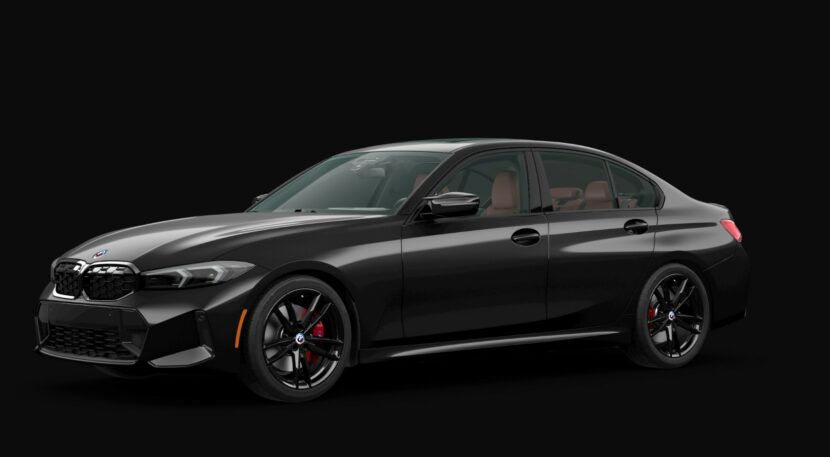 This M340i doesn’t have it, but the 2023 model year is available with an optional carbon fiber roof lifted straight from the full-fat M3 Sedan. It should be noted that neither the M Performance nor the M Touring version of the 3 Series is available with the lightweight roof as it’s a sedan-only option. Featuring a Tacora Red synthetic leather interior, the car at hand is a Canadian-spec model equipped with the adaptive M suspension and quite a few packages.

One of the packages that cost extra is the M Sport Pro Package, which bundles the adaptive LED headlights with black accents and red M Sport brakes. The Enhanced Track Package throws in upgraded brakes and drivetrain cooling while the Premium Enhanced Package adds a head-up display, ambient lighting, and an electric trunk lid. The latter pack also gets you the galvanic controls, a Harman Kardon sound system, driver lumbar support, BMW Drive Recorder, and Comfort Access.

Factor in the carbon fiber trim, wireless charging, and the universal garage door opener, this 2023 BMW M340i xDrive retails for just under 78,000 CAD. Despite the long list of pricey extras, it’s still considerably cheaper than an M3 Competition available in Canada from 86,800 CAD before options.