German tuner Manhart introduced its MHX7 650 package for the BMW X7 M50i in April and now a customer car has been spotted for the first time. It does away with the gold body accents but retains the retro-flavored sticker on top of the windshield. The M Performance SUV has a much more aggressive look courtesy of a body kit with numerous carbon fiber add-ons to enhance the behemoth’s muscular appearance.

The noise it makes certainly matches the X7’s imposing presence as the custom exhaust has been tuned to deliver an intimidating soundtrack. Manhart’s super SUV was filmed by a couple of YouTubers during the SCC500 event held in Germany at the Zweibrücken airport. We’d wager that not even a full-blown X7 M would be this aggressive since this looks and sounds a bit too extreme for a production M SUV. Perhaps BMW will prove us the contrary with the XM arriving by the end of the year. 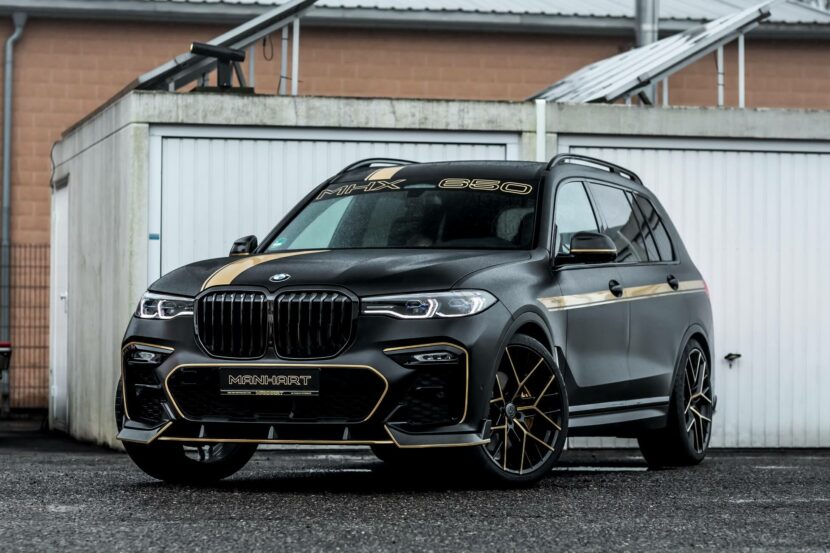 As you’re probably aware, the X7 M50i is technically no longer available in BMW’s portfolio. With the LCI introduced earlier this year, the M Performance variant was bumped to the M60i designation to signal a switch to the company’s new mild-hybrid S68 engine. It makes the same power and torque as before, but the engineers have developed a lighter oil sump and a new oil pump, while the upgraded turbochargers get a blow-off valve.

It remains to be seen whether there will be a real benefit in terms of performance or only the efficiency has been improved after dropping the N63. ALPINA has already introduced its LCI-based XB7 with the electrified V8 for those who want the closest thing possible to an X7 M. Another alternative is to contact tuners such as Manhart as they’re always eager to tweak the 4.4-liter unit to extract heaps of power.