Rarely has a BMW gone through so many changes for its Life Cycle Impulse, and in the case of the X7, the M Performance version has even changed its name. Retiring the old M50i moniker, the LCI has ushered in a new M60i suffix that is going to trickle down to the smaller X5 and X6 next year. The most athletic version of the fullsize luxury SUV has arrived at BMW Welt in Carbon Black Metallic, representing a dark shade of blue.

As with all vehicles showcased at BMW Welt, the X7 M60i is a high-end version with a lot of the boxes on the options list ticked. It rides on large 21-inch wheels with a two-tone design backed by blue brake calipers typical of an M Performance version. Bavaria’s stately SUV boasts the M Sport Package Pro and the newly designed quad exhaust tips we’ll begin to see more on these large “M Lite” models. 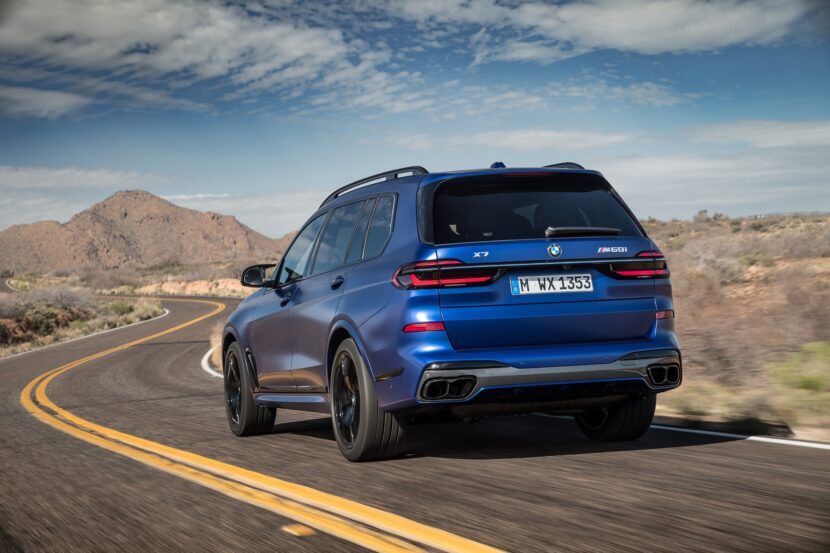 The black accents noticeable at the front apron, side mirror caps, and roof rails are part of the Shadow Line upgrade. Needless to say, the biggest change introduced with the LCI is represented by the fully redesigned headlights with a separate cluster for the daytime running lights mounted above the main lights. It’s a look we’ve also seen on the new 7 Series / i7, with the XM debuting before the end of the year to have a somewhat similar layout.

The X7 also boasts significant changes on the inside where BMW has given its biggest SUV the latest Operating System 8. It simplifies the dashboard by deleting many of the conventional controls, which are now accessible by using the 14.9-inch touchscreen of the infotainment system. To make room for the bigger center display, the air vents on the center console are now slimmer. On the passenger side of the dashboard, there’s an illuminated X7 logo in the case of the regular trim levels or a light-up M for the M60i.

Despite the comprehensive facelift, the three-row SUV is still missing a plug-in hybrid powertrain and a full-fat M version. BMW has likely crunched the numbers and figured there wouldn’t be enough demand to warrant the investments. It’s especially true in the case of an X7 M since the plug-in hybrid XM debuting in the coming months will take the role of the company’s flagship performance SUV.