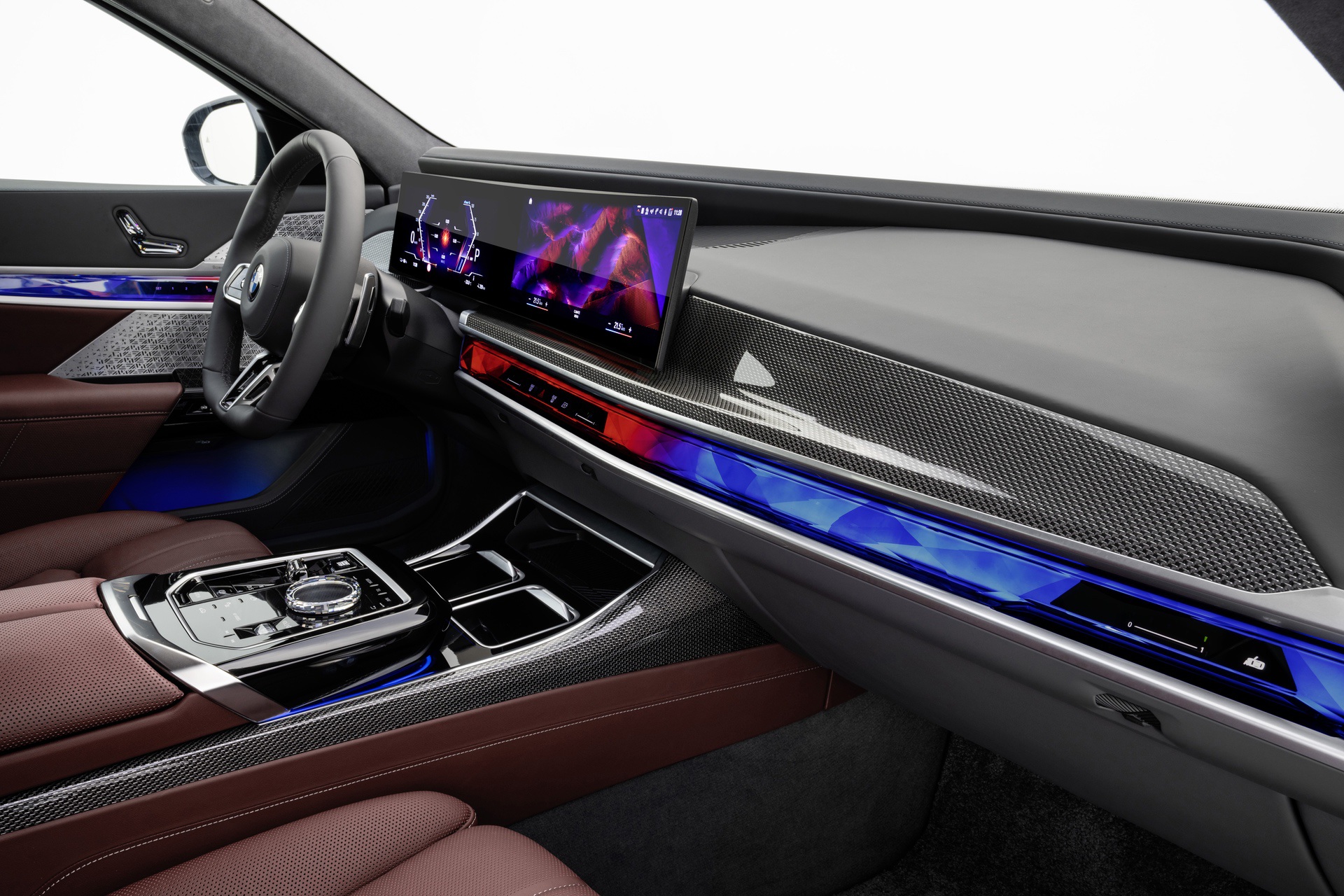 Last week, almost a full week prior to the official reveal of the new 7 Series, Horatiu and I had the chance to see both the new 7er and the BMW i7 in person. It was a closed-room sneak preview of the two new cars, in which we were not only given access to see the cars but also to sit in them, poke around, and play with the tech. Designers and executives were also on hand to answer any questions we had about the new cars.

During the few hours we had with the cars, we learned a lot about them, both from a technological standpoint but also a visceral one. Spending a few hours with them, and actually getting to physically interact with them, obviously gave us a better understanding of what they’re actually like, especially on the inside.

I spend some time in both cars, the new BMW 760i with its M Sport package, and the new BMW i7. Interestingly, BMW also had the new X7 LCI on hand, which was a nice contrast, allowing us to see how the previous-generation of interior BMW design compares to the new one in the two 7ers. So what are my thoughts and first impressions on the new 7 Series/i7 interior? It’s the best BMW’s ever done, without question.

With this new 7 Series, BMW is closer than ever before to genuinely competing with the Mercedes-Benz S-Class, in terms of interior design and quality. Not only is it intelligently laid out, perfectly ergonomic, and astonishingly well-made but it’s also great to look at and features flashy tech that’s both dazzling to look at but also really well thought out.

Let’s start up front, which is both the most used passenger compartment in the interior and, ironically, the least interesting. BMW has done a really nice job making the 7 Series look and feel lightyears more premium and interesting than the previous generation, while also keeping the same sort of serious, business-like feel. It’s far flashier than the outgoing 7 Series but it never feels gimmicky or silly.

The new steering wheel is lovely. It’s still too thick but the materials are wonderful and it looks so much better than the previous 7 Series wheel. In the M Sport-equipped 760i, I held a three-spoke, flat-bottomed, sporty looking wheel and the bottom spoke was made from skeletonized metal, which gave it a sporty and almost exotic look, almost like the aluminum arms of an exotic supercar’s wing spoiler. As I held that wheel, I also sat in the softest, most comfortable seat of any BMW this ass has ever experienced. Soft but supportive is the best way to describe the 7er’s front thrones.

Prior to actually seeing the car’s in person, I thought the “Interaction Bar” bit of lighted dash trim was going to be gimmicky. And it honestly sort of is but in the best way possible. It actually does have some useful function, such as the ability to display certain light patterns and flashes for certain functions, such as receiving phone calls or when the AI assistant is summoned. So it can provide some usefulness but it’s mostly there to look cool. And cool it does look.

The  Interaction Bar spans the entire dashboard, extending into both front door panels, acting as a typical piece of trim. But the entire bar features a crystal-look effect, with dazzling lighting that’s completely customizable. It’s sure to wow passengers and I can see it becoming a feature BMW fans want in almost every other car.

But I want to quickly move to the back seat because that’s where luxury cars really separate themselves. This new 7 Series, as well as its all-electric i7 sibling, has among the very best backseats in the luxury car game. It’s everything you want from a luxury car’s rear passenger compartment; spacious, comfy, and packed with useful technology.

The first thing you notice when you sit in the back the new 7 Series is just how comfortable its seats are and how much knee room you have. It’s truly limo-like in the back, but I’m admittedly only 5’9″, so it doesn’t take much to make me comfy. However, you soon notice a suite of other great features, such as the automatic closing doors, which are operated via a button push near the door grab handle. Push it and the door will close itself automatically, like in a Rolls-Royce. See if your S-Class does that. 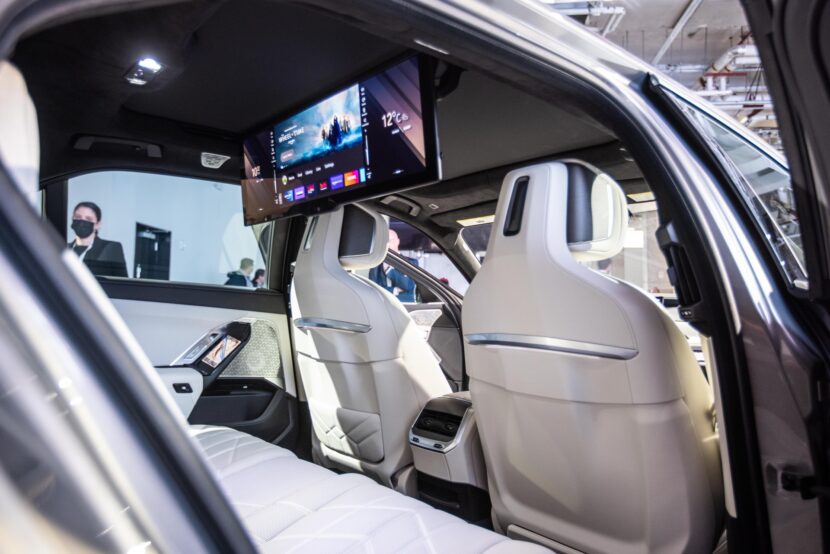 You can’t touch that door button without noticing yet another fantastic feature. The rear door panels feature little touchscreens, which are tilted toward the passenger in classic BMW fashion, and they control everything that can be controlled for each rear zone; climate, ambient lighting, sunroof, sunshades, and entertainment. They’re clear, their graphics are crisp, the user interface is easy to understand, and they’re touchscreens are responsive. They beat the pants off of the old tablet that used to pop out of the armrest, as they’re easier to use and each rear passenger gets one, rather than sharing/fighting over just one.

Speaking of entertainment, the optional theater screen has been discussed ad nauseam but it’s honestly still probably not enough. It’s incredible. A massive 31″ screen deploys from the headliner and it can actually move toward the rear passengers so they can use it as a touchscreen if they want, if they don’t feel like using their own door screens. It features an 8k resolution, which is just silly, but very welcome, overkill and is Amazon Fire TV-based, which means it can run all of your streaming apps, allowing you to stream up to 8k content via its 5G data connection. 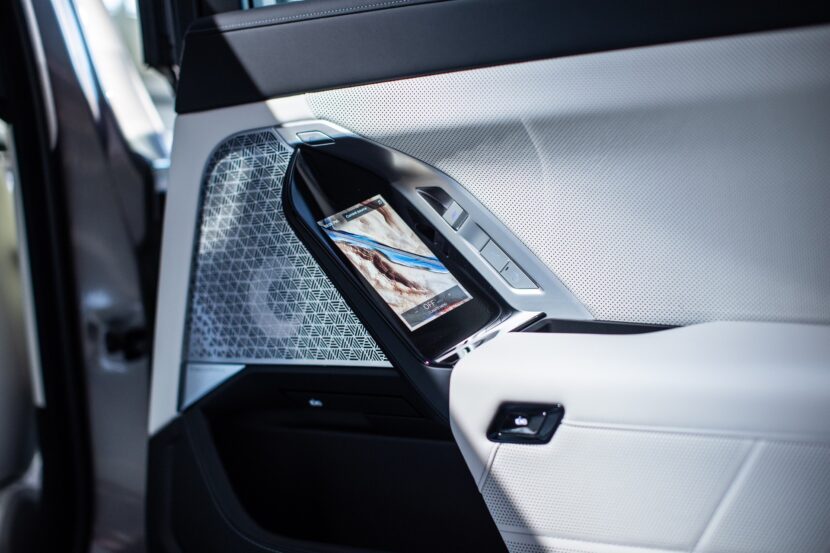 I don’t know about you but I have kids and the ability to stream their favorite shows and movies from an epic screen in the back seat would make every road trip about one million times easier. Also, if I owned a 7 Series/i7, I’d make my wife drive everywhere, so I can watch the rest of Severance from the back seat, with the absurd new 4D Bowers & Wilkins surround sound system playing its spine-tingling soundtrack.

Honestly, sitting in the backseat of either the 7 Series or i7 is positively kick-ass. Everyone who’s read my articles knows I’m no BMW fanboy and I don’t dish out praise often — I’m a pretty curmudgeonly fellow and like to criticize. Plus, my constant souring on BMW’s recent design language has had me fall out of favor with some of BMW’s design team (Horatiu knows what I’m talking about). So when I say the backseat of the 7 Series is probably the coolest I’ve ever sat in, I mean it. 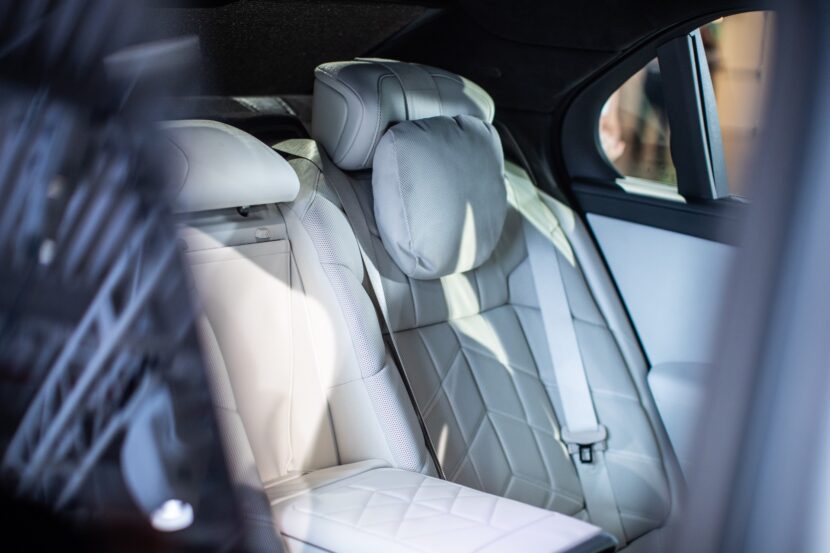 The tech is useful and enjoyable, without being overbearing or obnoxious. Its seats and materials are outstanding. The Bowers & Wilkins sound system will blow you away. While the front seat isn’t quite as mind-blowing, it’s still superb. Without question, the new 7 Series cabin is the best the brand has ever done and it’s the first time since maybe the E38-generation that the 7 Series can genuinely compete with the S-Class, in terms of interior quality.