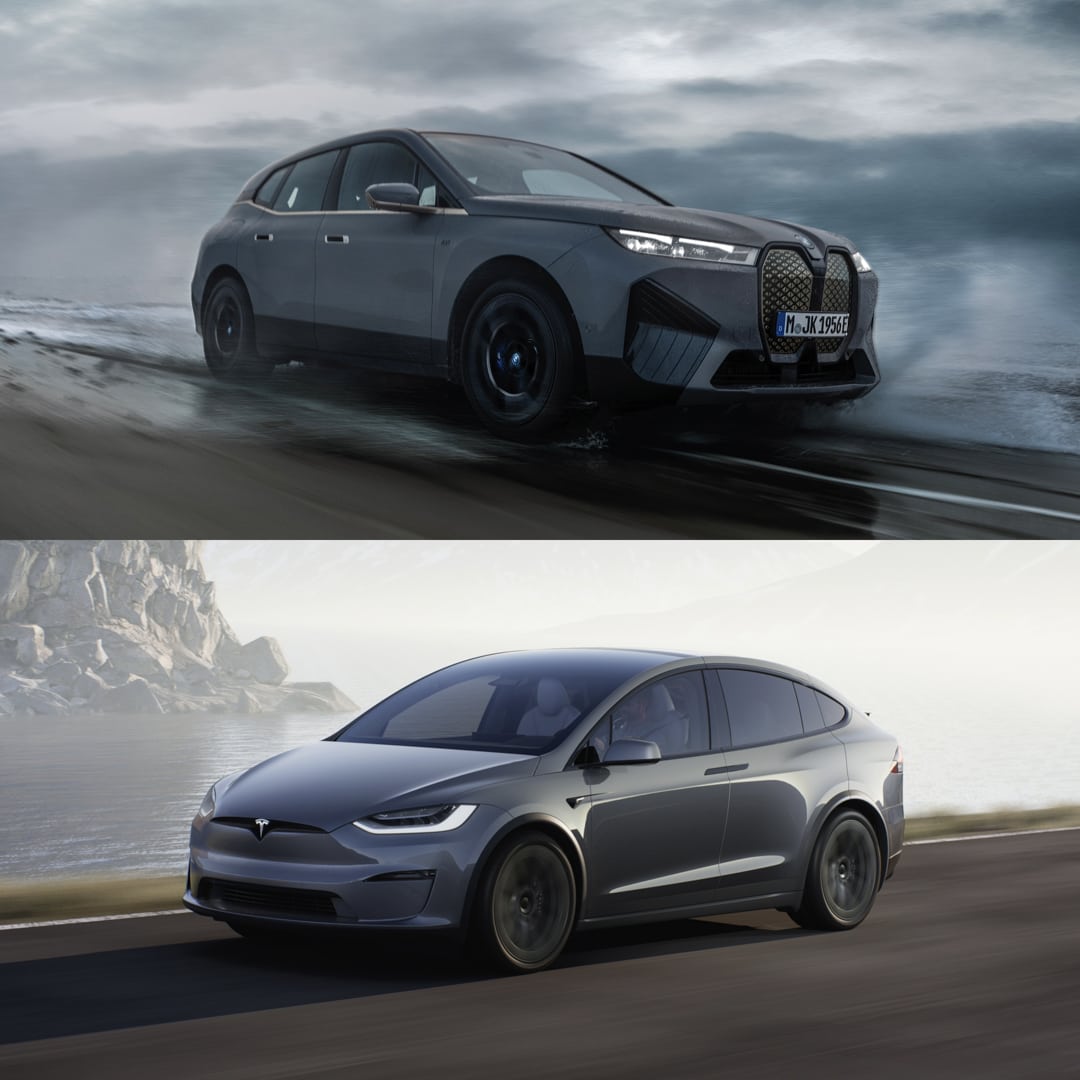 When the BMW iX M60 hits the market, it’s going to be compared to one car more than any other — the Tesla Model X. Naturally, being the household name in EVs, Tesla is the brand by which all other EVs are measured and its Model X is easily the most famous electric SUV. It’s also the fastest electric SUV currently on the market, so it’s the natural competition for the iX M60.

There are only two Model X variants you can buy at the moment. One is the standard car and the other is the Plaid. The latter of which is the more famous but since it has over 1,000 horsepower, we’re going to compare the iX M60 to the standard car. However, Tesla doesn’t advertise how much power the standard Model X makes, it only says it can get from 0-60 mph in 3.8 seconds. The iX M60 is claimed to do the same sprint in 3.6 seconds, so that’s close enough.

Obviously, we won’t be comparing their performance, as the iX M60 hasn’t been released so we can’t test it just yet. Instead, we’re going to compare their looks, as styling and interior design are going to be almost as important to customers as range and performance. So let’s take a look at which car is easier on the eyes.

For many customers, this will be a comparison of which car is the least harsh on the eyes, as neither are broadly loved. Both cars are actually mostly criticized for their designs, for very different reasons. So let’s just in and see which hurts the least to look at.

Grille or No Grille, That is the Question 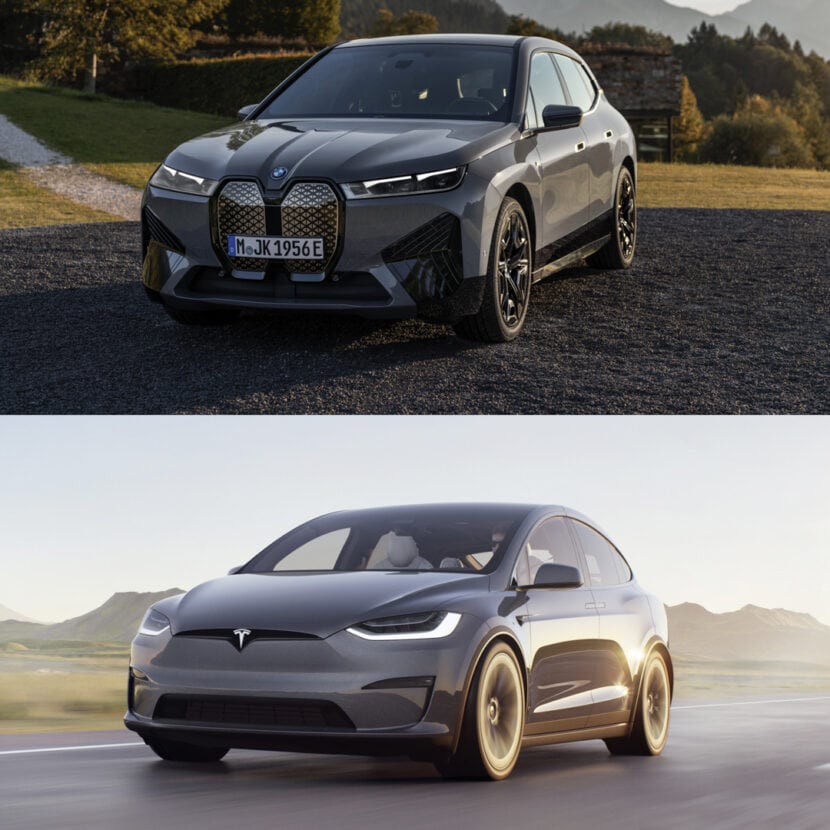 Up front, the BMW iX features an enormous, controversial “grille”, some slim headlights, and a couple of front air intakes, for cooling the batteries. However, aside from the massive front grille panel, the iX is a rather subtle looking car. The Tesla Model X, on the other hand, is downright bland. It has as many body lines, creases, and angles as an egg. There’s no front grille to speak of, its headlights are as plain as it gets, and there aren’t any interesting lighting elements. It does have a small mustache, surrounding the logo, but that’s about it. While the BMW iX is no super model, at least it gives you something to look at. It wins up front. 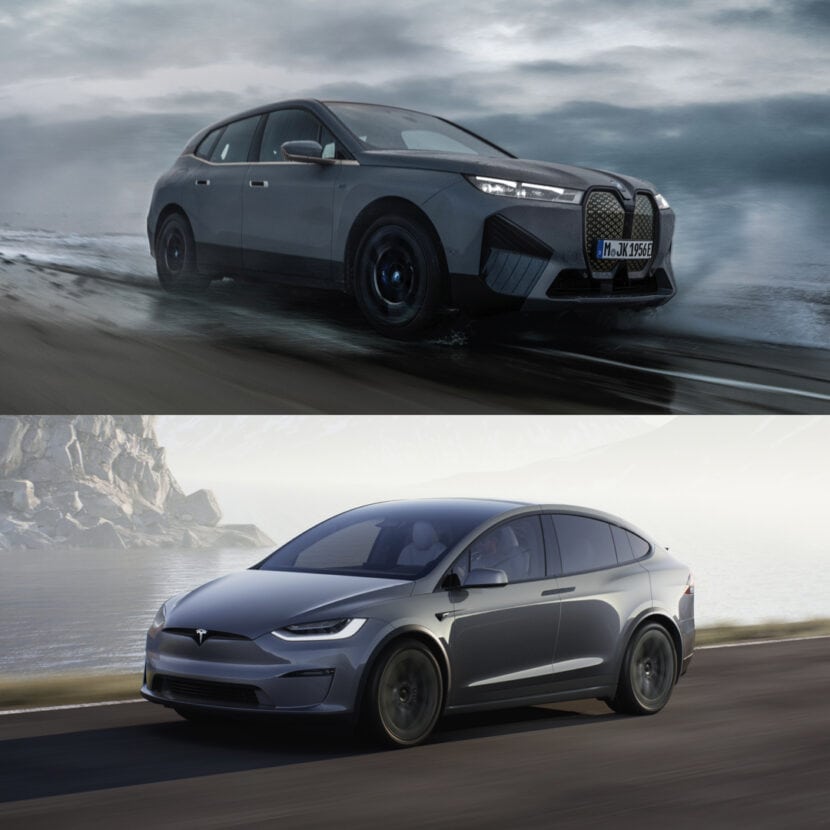 Look at both cars from the BMW iX M60 is clearly the better looking car. I feel like a BMW homer saying things like that but the Model X has the silhouette of an upside down canoe. There’s just nothing interesting or special looking about the iX’s design. Maybe that’s for aerodynamics but it’s still ugly. The iX is more muscular looking, has more body lines, nicer wheels, and a sportier shape. There’s not much to say about the Model X except that it’s about as interesting looking as an envelope filled with envelopes. 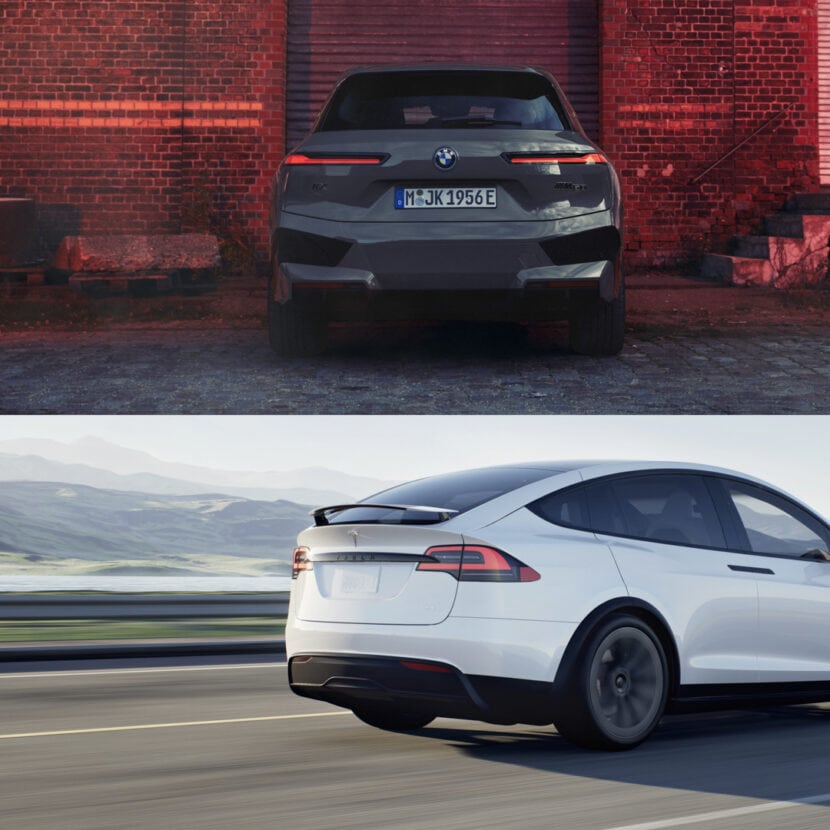 The Tesla Model X features a very tall butt for a car with such a sloping rear roofline. It’s an inoffensive, yet incredibly nondescript, rear end. The taillights aren’t ugly, they’re just there, and the rest of the back side is just kinda vanilla. Not that the iX looks like an F-Type out back but it’s a bit more interesting to look at than the Model X. Its slim taillights are sleek and modern, you can see its muscular rear haunches, and it gets little bumper flares where exhausts typically would be, making it look sportier than the Model X. So it wins here. 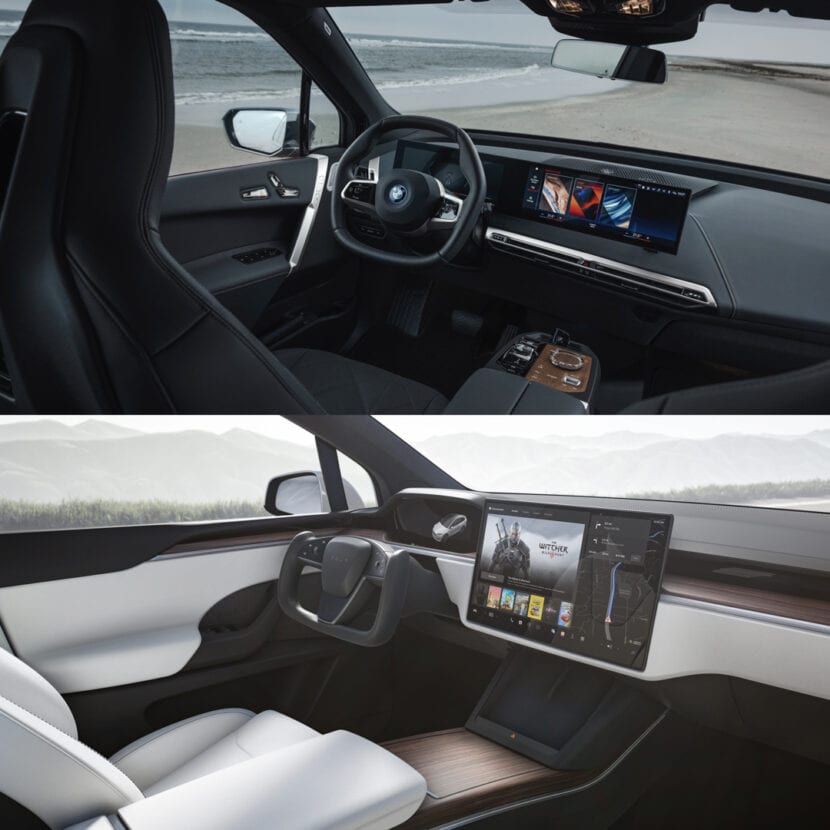 This is the easiest category to compare. The Model X might have one of the least pleasing interiors in the business. The massive touchscreen that dominates the dash is good looking in isolation but the fact that every control is built into it, including even adjusting the mirrors and wipers, is not very user friendly. That’s the only way to put it. Then there’s the absurd auto-drive select system, that determines whether to put itself into drive or reverse on its own, with a touchscreen-based slider to go along with it. Last but not least is the fact that an SUV, with a massive turn radius and a steering ratio that requires more than 2.3 turns lock-to-lock, uses a yoke for a steering wheel. It makes Saab’s old joystick steering look smart.

The BMW iX, on the other hand, has a fabulous interior. It’s actually the best thing about the car. Its design is fresh, its tech is good, its build quality is top notch, and it features lovely materials. The BMW iX has the best interior of any BMW, maybe ever. So it wins again.

A decisive win for the BMW iX M60, sweeping the Model X in every category. I might sound like a BMW fanboy but I’m not. The iX is no looker; its grille is pretty rough looking and most of it is quite boring to look at. But compared to the Model X, the iX M60 is a damn supermodel. So it wins. But before you pull out the pitchforks, keep in mind that these design comparisons can be subjective, it’s only natural. 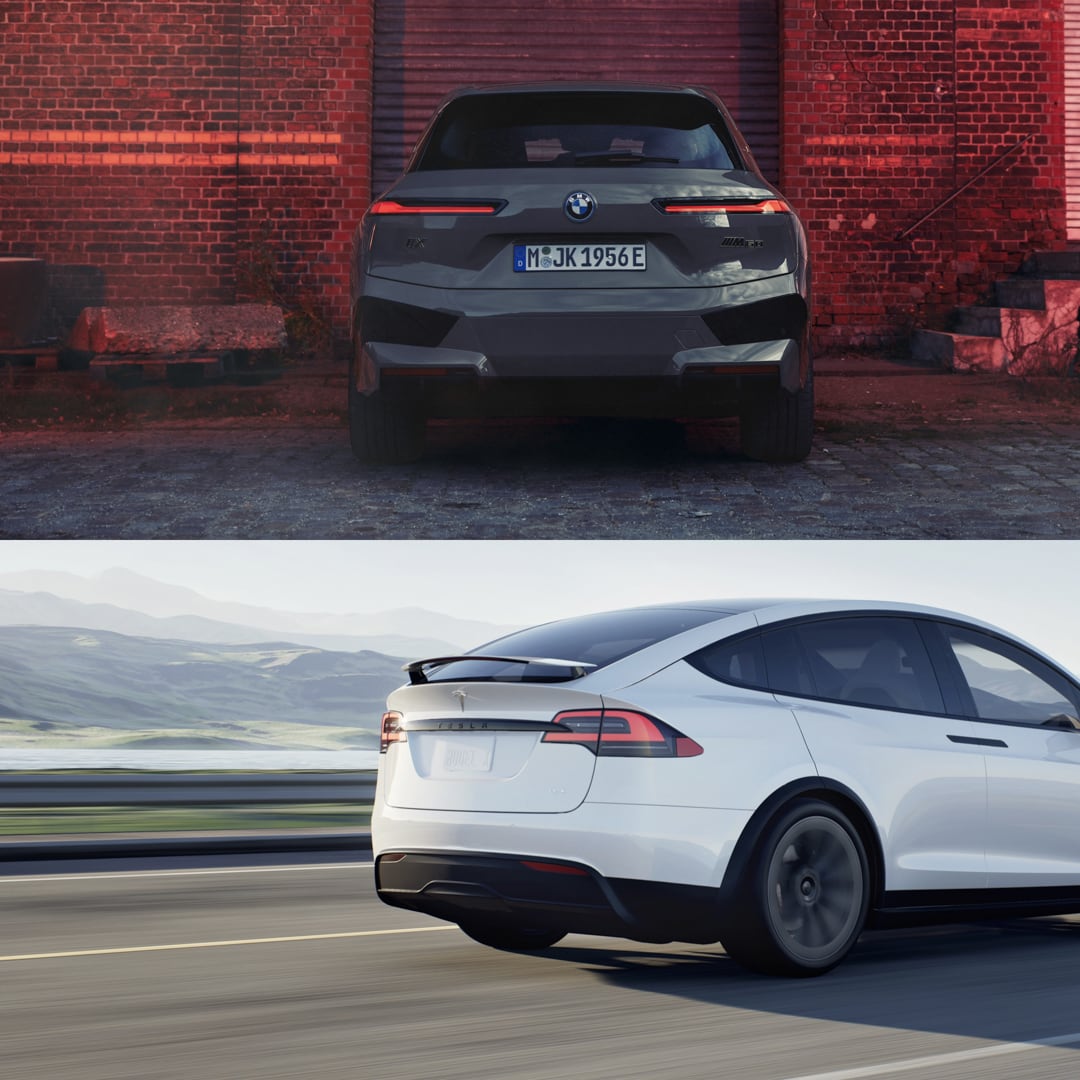 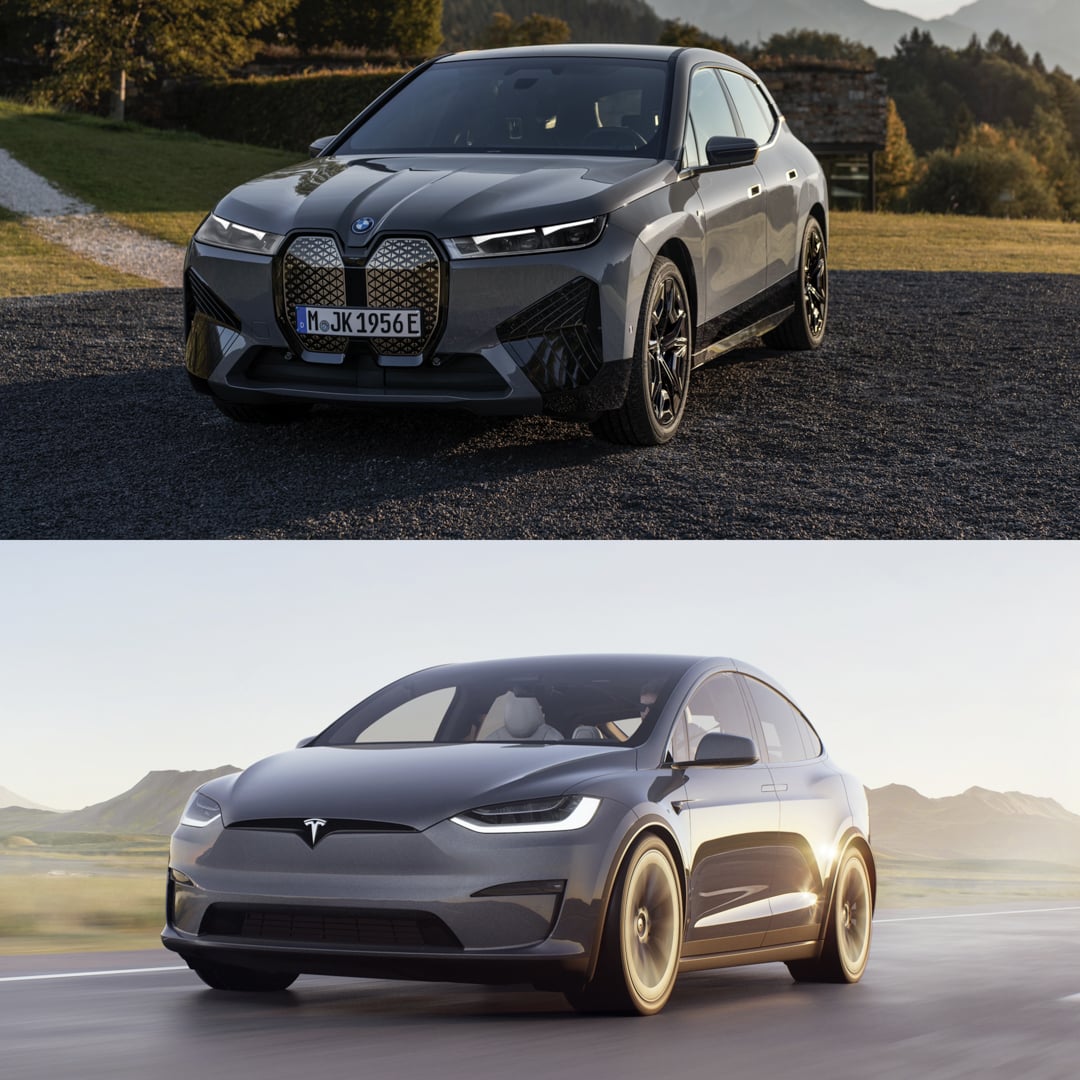 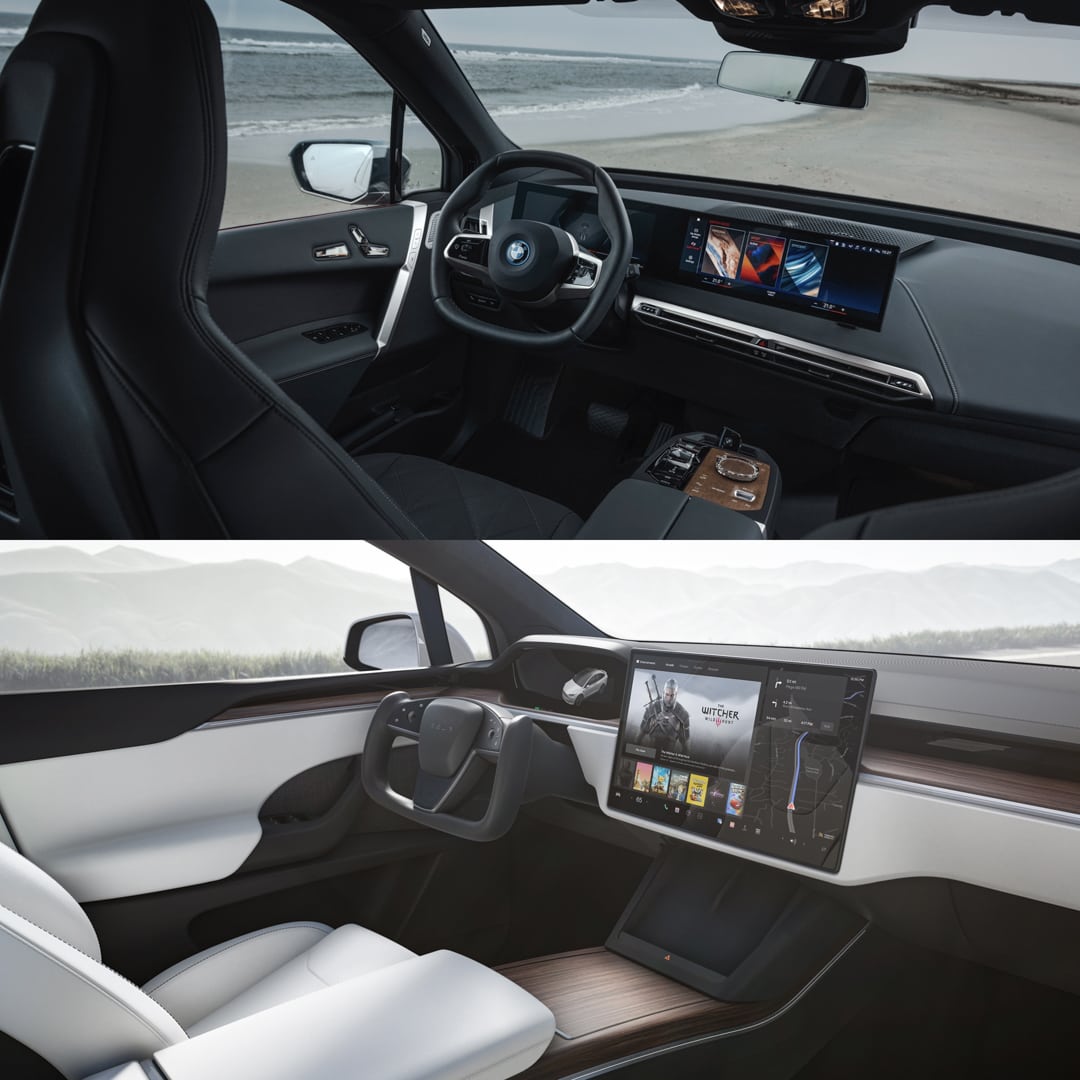