The BMW M4 Competition (G82) is still a relatively new car, meaning it will take a while before tuners are going to start rolling out comprehensive upgrade packages for the high-performance coupe. In the meantime, a simple mod such as fitting an aftermarket exhaust system can squeeze out a few more ponies from the inline-six, twin-turbo engine.

The 3.0-liter belonging to this lovely Sao Paulo Yellow M4 now pumps out 527 hp at 6,672 rpm and 699 Newton-meters (493 pound-feet) of torque attainable from just under 3,000 rpm. BMW officially rates the S58 engine installed in the Competition model at 503 hp and 650 Nm (479 lb-ft), but it’s a known fact that German automakers tend to be overly conservative when releasing the power ratings of their cars.

For this reason, the difference in output might not be entirely related to the Akrapovic exhaust and its carbon fiber finishers. We must admit the soundtrack delivered by this boldly specced M4 Competition isn’t particularly exciting, but it’s partially because the car has a gasoline particulate filter as most new Euro-spec cars feature nowadays. 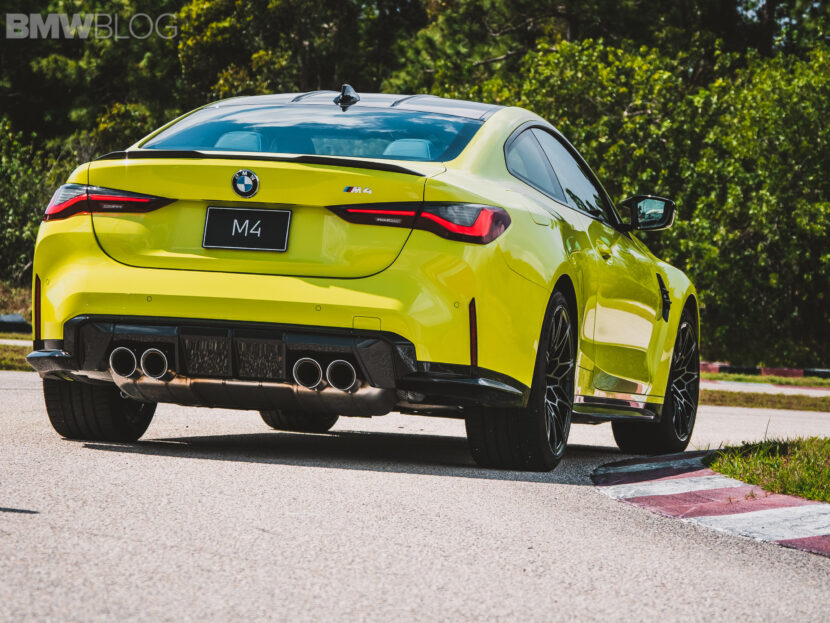 We’re hoping the hotly anticipated M4 CSL coming next year will feature a more aggressive exhaust note beyond the other upgrades that have already been confirmed. Chief of which will be a massive weight loss of over 100 kilograms (220 pounds), and we are also expecting BMW’s engineers to work their magic on the inline-six engine and infuse some extra oomph.

The M division is keeping itself rather busy these days by working on a variety of spicy products, including CS versions of the M3 and M4 for a potential 2023 release. Of course, the most interesting vehicles will be the XM arriving towards the end of next year with around 750 horsepower from a plug-in hybrid V8 setup and the long-overdue M3 Touring.

Meanwhile, as more and more M3s and M4s hit the road, tuners are eager to work on the S58 and boost its output beyond what the Competition models are offering in stock configuration.