The highly awaited BMW M4 xDrive all-wheel drive vs. BMW M4 rear-wheel drive drag race! We got the new 2022 BMW M4 xDrive going head-to-head with the RWD BMW M4 at the Thermal Club in California. Behind the wheel we have BMW PRO Works Drivers Bill Auberlen and John Edwards who will race each other and also take the new M4 from 0 to 62 mph and 0 to 130 mph.

There is also a bonus footage at the end showcasing a 30 mph roll-out. Basically, we wanted to see if the xDrive advantage of the M4 will be eliminated in roll racing. This racing occurs from a “roll”, meaning both vehicles start from a rolling start or anything but zero MPH. Aside from the addition of the all-wheel drive, the new model is still an M4 Competition under the skin. Which means it uses a 3.0 liter twin-turbocharged I6 to make 503 horsepower and 479 lb-ft of torque. Its eight-speed auto sends the power to the wheels through an electronically-controlled limited-slip rear diff. It’s also excellent to drive and makes up for all of its odd looks with its sensational dynamics. 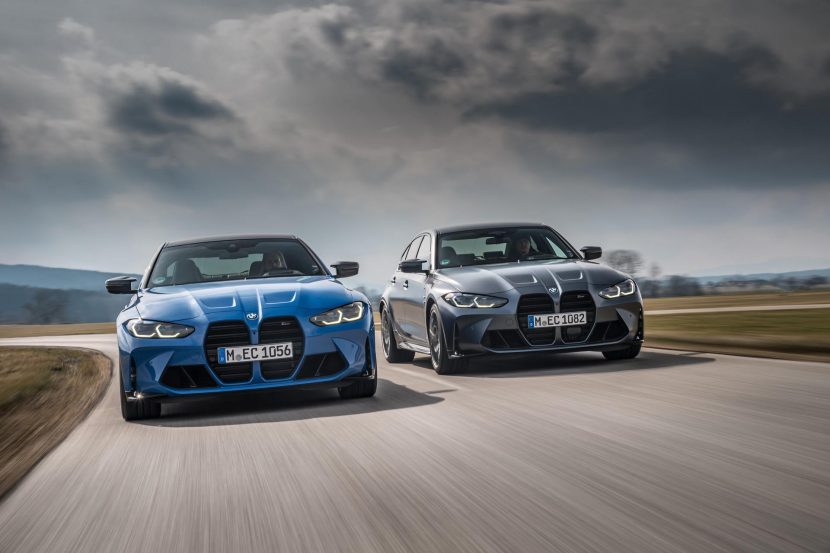 The BMW M xDrive systems in the new M3 and M4 works very similarly to how it works in the M5. There are three modes; 4WD, 4WD Sport, and 2WD, just as there are in the M5 and M8. In normal driving conditions, even in the default 4WD mode, all of the engine’s available torque is sent to the rear wheels. Only once the need for more grip arises will the front wheels get any of the car’s torque and, once that happens, power is still delivered in a rear-biased fashion. Though, in the default 4WD mode, the xDrive system is more liberal with its front axle power delivery.

Switch to 4WD Sport mode and the front axle really just becomes more of a rear axle aid. The xDrive system becomes more aggressive and is more willing to let the car slide but will deploy the front axle to save your ass and keep the car from getting too out of control. It’s the fun mode for street driving and the one most enthusiasts will use the majority of the time. While the 2WD mode is the more extreme mode, as it keeps the front axle disengaged until the driver switches the car back to either of the 4WD modes. However, DSC (Dynamic Stability Control) must be disabled entirely for 2WD mode to be used, so it’s recommended that it’s only used on track.

Speaking of the track, the footage below also includes a 0-62 mph sprint, along with a 30 mph race roll-out to see somewhat offset the extra grip of the xDrive system. Which one is faster? The answer is obvious, but let’s take a look and don’t forget to subscribe to our Youtube channel!