I recently had the chance to spend a week with the BMW M5 CS and I’m still swooning. Its overall brilliance has placed the M5 CS at the tippy top of my favorite BMWs I’ve ever driven and it’s going to have to take something epic; like an E46 M3 CSL , E28 M5, or BMW M1; to dethrone it.

Some might feel that my verbal adoration for the M5 CS is hyperbole but it’s not. In this new review, I talk about why the BMW M5 CS is every bit as good as it’s said to be. And that’s coming from someone who doesn’t have the ability to thrash cars on track. For instance, someone like Chris Harris can hoon any car he tests on track, whenever he wants. I cannot. Yet, even on some decent back roads, as well as an airstrip, the M5 CS blew me away.

On said airstrip, I had the chance to test its straight-line speed and it’s officially the fastest car I’ve ever driven. During my third run, it hit 60 mph in 2.81 seconds. Admittedly, that was with a one-foot rollout on the Racebox but even Car and Driver uses a one-foot rollout, so I don’t feel too guilty about it. Either way, the only other YouTuber I’ve seen get a faster time was Joe Achilles (damn you, Joe!). Even more impressive, though, was its 10.80 second quarter-mile time. If someone told thirteen year old me I’d drive a sub-eleven second car one day, I wouldn’t believe them. 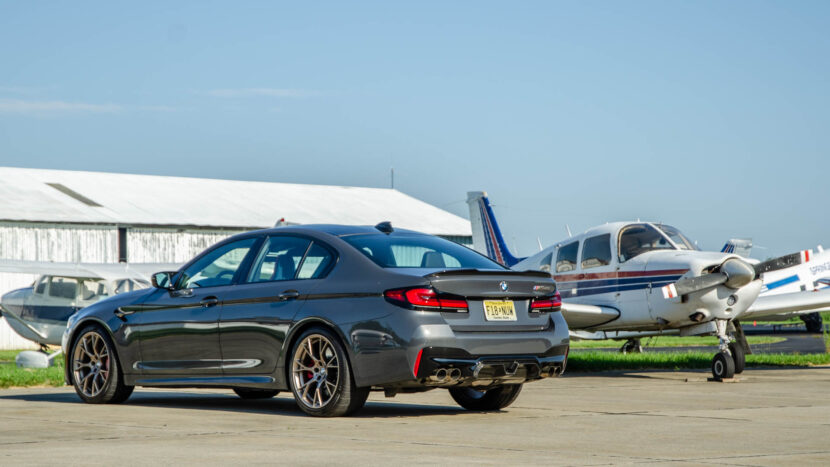 Don’t think the M5 CS is just about straight line speed, though. For CS-duty, BMW M swapped out the M5 Competition’s adjustable dampers for the set found in the M8 Gran Coupe, stiffened the spring rate by ten percent, increased front-negative camber, gave it stiffer ball joints, and fit it with a stiffer anti-roll bar. All of those tweaks, along with its reduction in weight — carbon fiber hood, carbon roof, and less sound deadening — combine to create a near-perfect driving experience.

Check out the videos below to see what the BMW M5 CS is like to drive.