There is no secret that the M engineers in Garching are working on a bespoke high-performance car which will be unveiled in 2022. Initially dubbed the BMW X8 M, the new marketing name seems to be the BMW XM. It’s not only going to be the first bespoke M model but also the first electrified proper M car and the most powerful BMW ever made. The overall design is still a bit of a mystery, even though recent spy photos shed some light on the design language.

Therefore, it comes as no surprise that rendering artists are trying to figure out the design cues hidden behind the camo. These new renderings, courtesy of @magnus.concepts, give us a front and rear look of the XM, but of course, as always, it’s not going to be a 1:1 design with the final model. One thing that stands out immediately is the layout of the famous double twin exhaust pipes. Like all M cars, the BMW XM gets quad exhausts but it’s how they’re placed in the rear bumper that’s unique.

The exhaust pipes are shaped like hexagons and stacked on top of each other. Vertically-stacked exhaust pipes are new for BMW and it’s a design that some fans are going to need some time to adjust to. Just like the M Performance Exhaust for the new M3/M4. The taillights retained the typical L-shape, but with straight edges versus the curved ones seen on many other BMWs. The rear bumper shows some sculpted shapes for a very aggressive look.

The front-end is certainly the more intriguing part. It features a set of oversized grilles with horizontal slats, like on the new M3/M4, but this time paired with unusual split headlights. The rendered XM also showcases a power dome – typical to M cars – along with large air intakes and curtains for additional air flow. The M mirrors and broad shoulders are also present. The three quarter view paints a picture of a coupe-like roofline, but with a large rear windshield and generous trunk space.

The BMW XM models will have several variants, based on power, just like the current X5M or X6M. The entry-level XM is rumored to have an output of 460 kW / 625 PS (617 hp). Next we have the upper-end XM (M Top is the working name) which is set to become the first electrified full M model in history. It is rumored to pack a hybrid powertrain combining a V8 petrol engine and an electric unit that together will raise the peak output up to staggering 748 PS (738 hp).

Let’s take a closer look at these renderings: 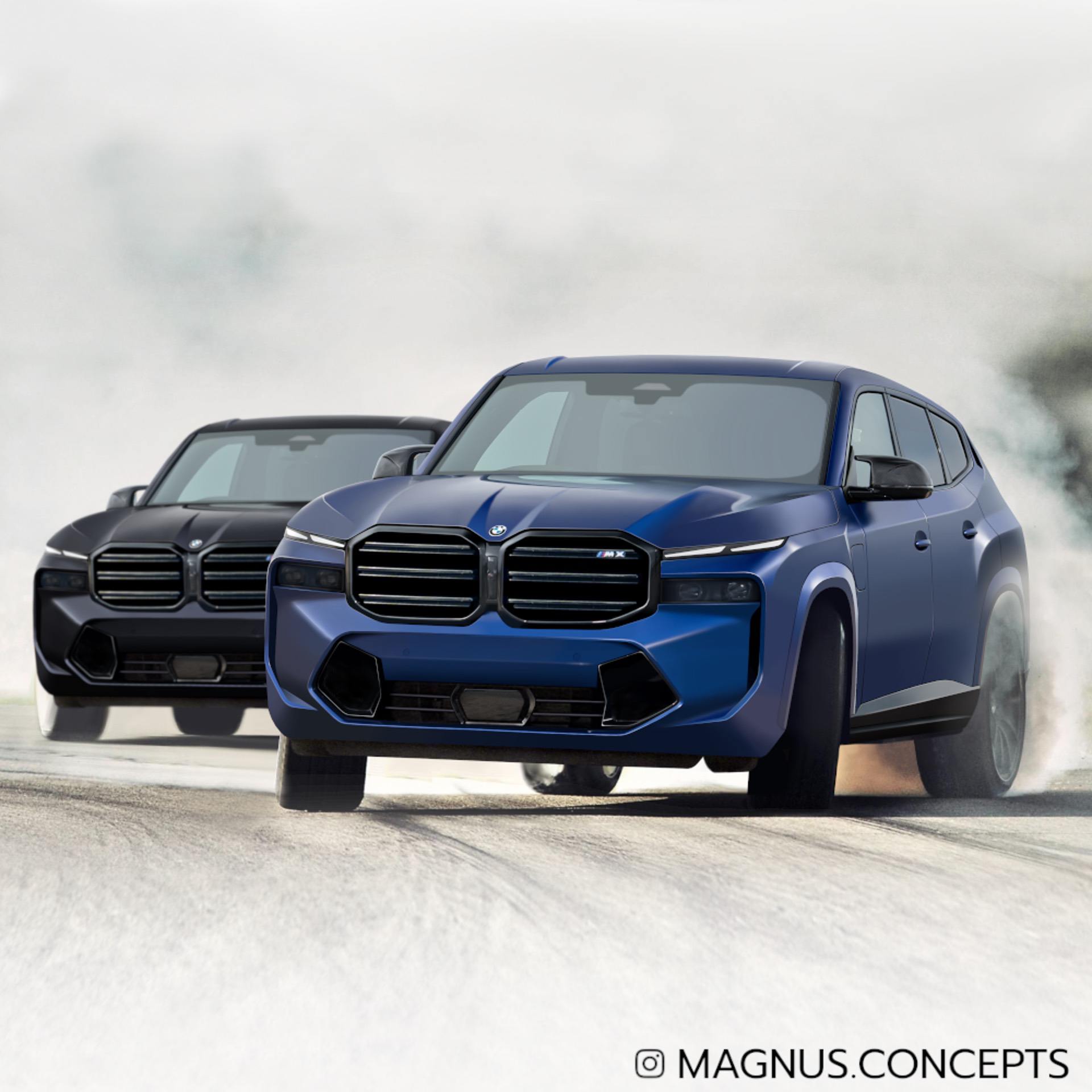 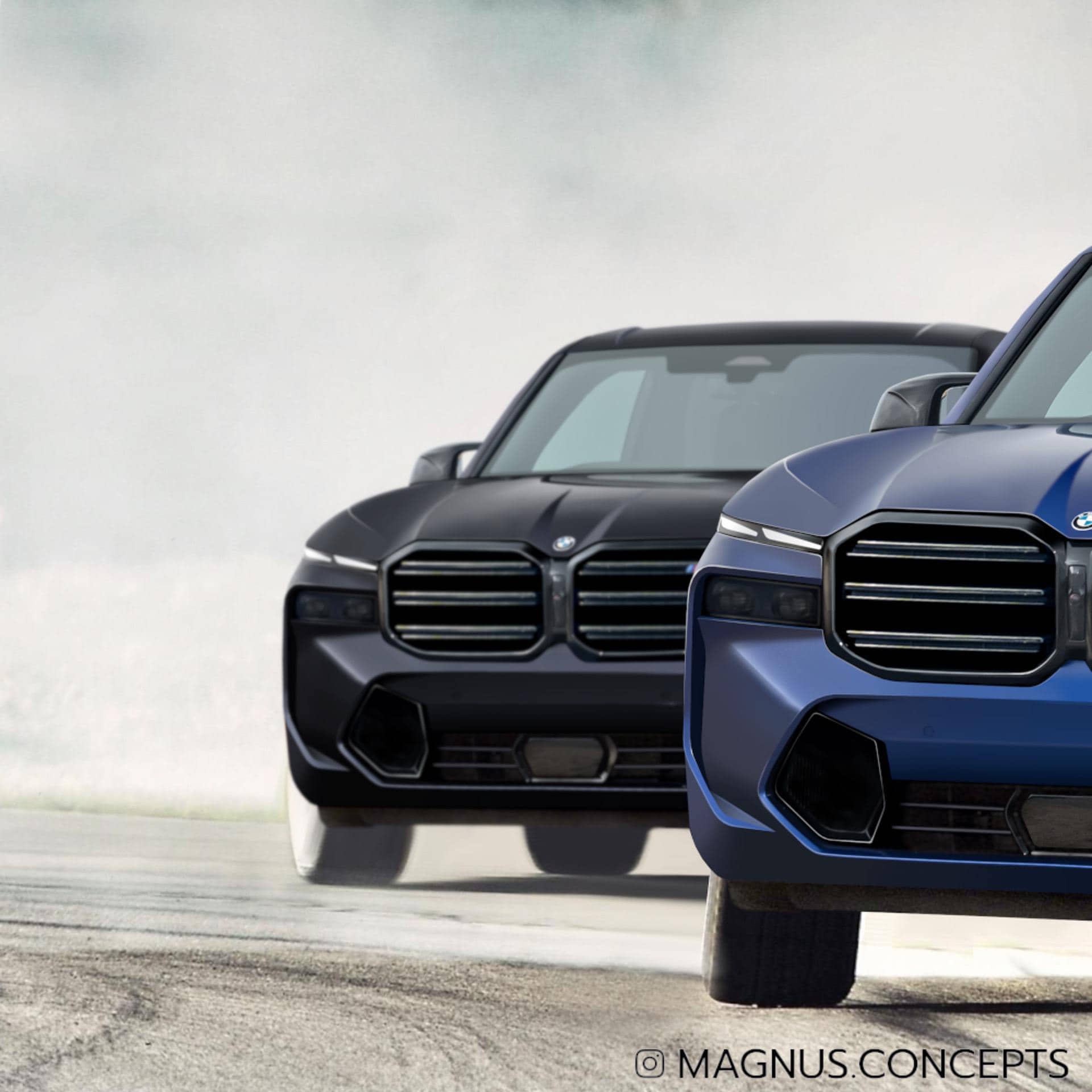 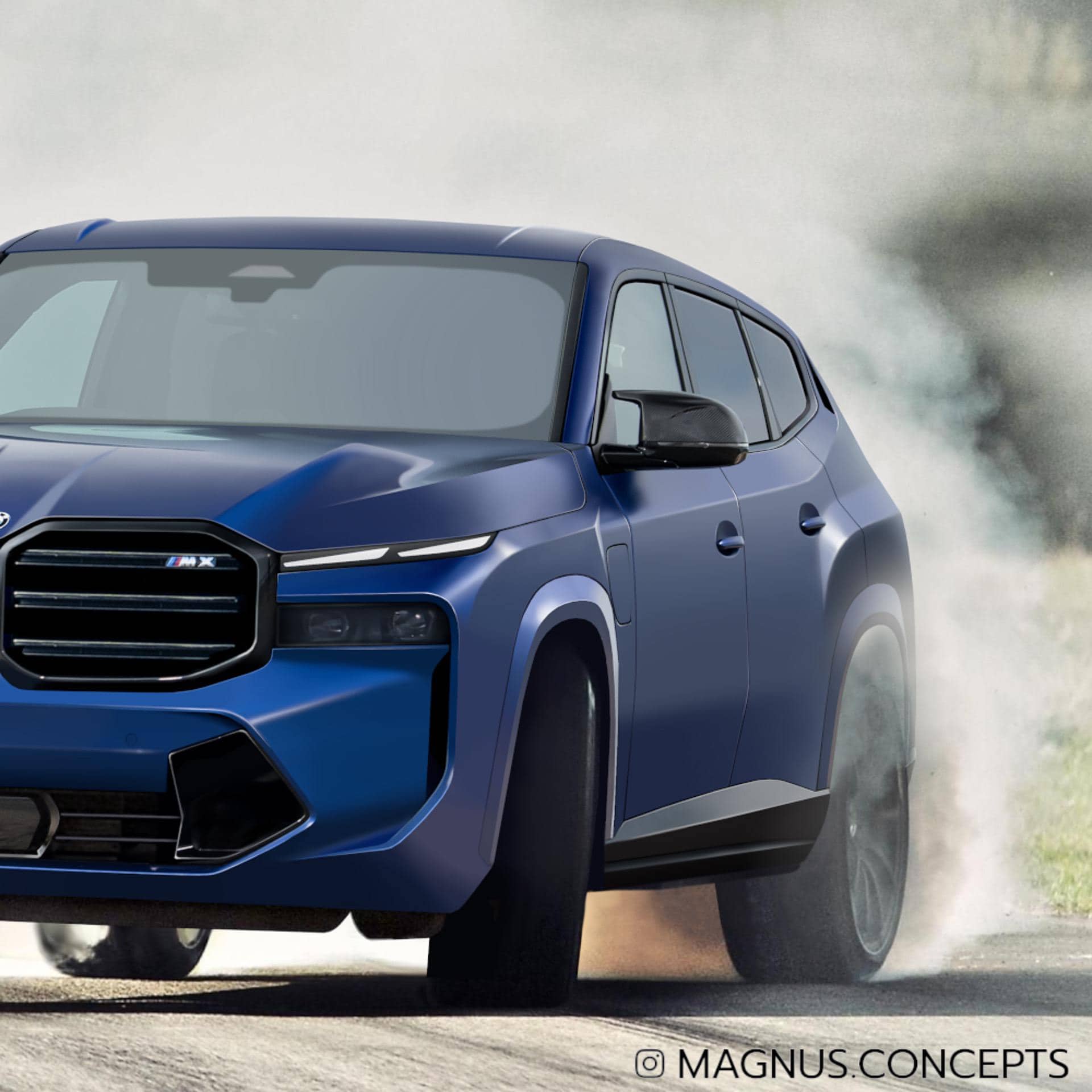 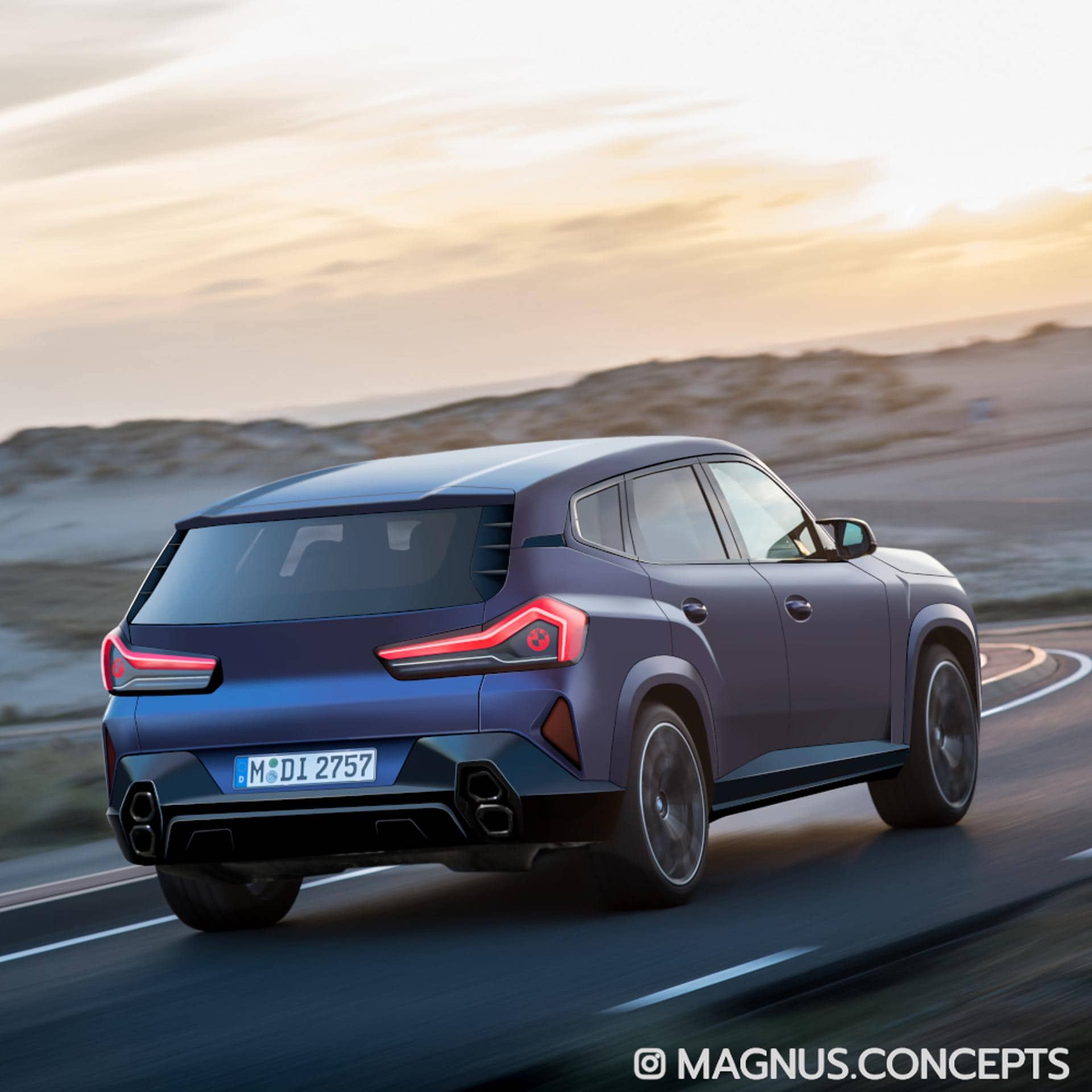 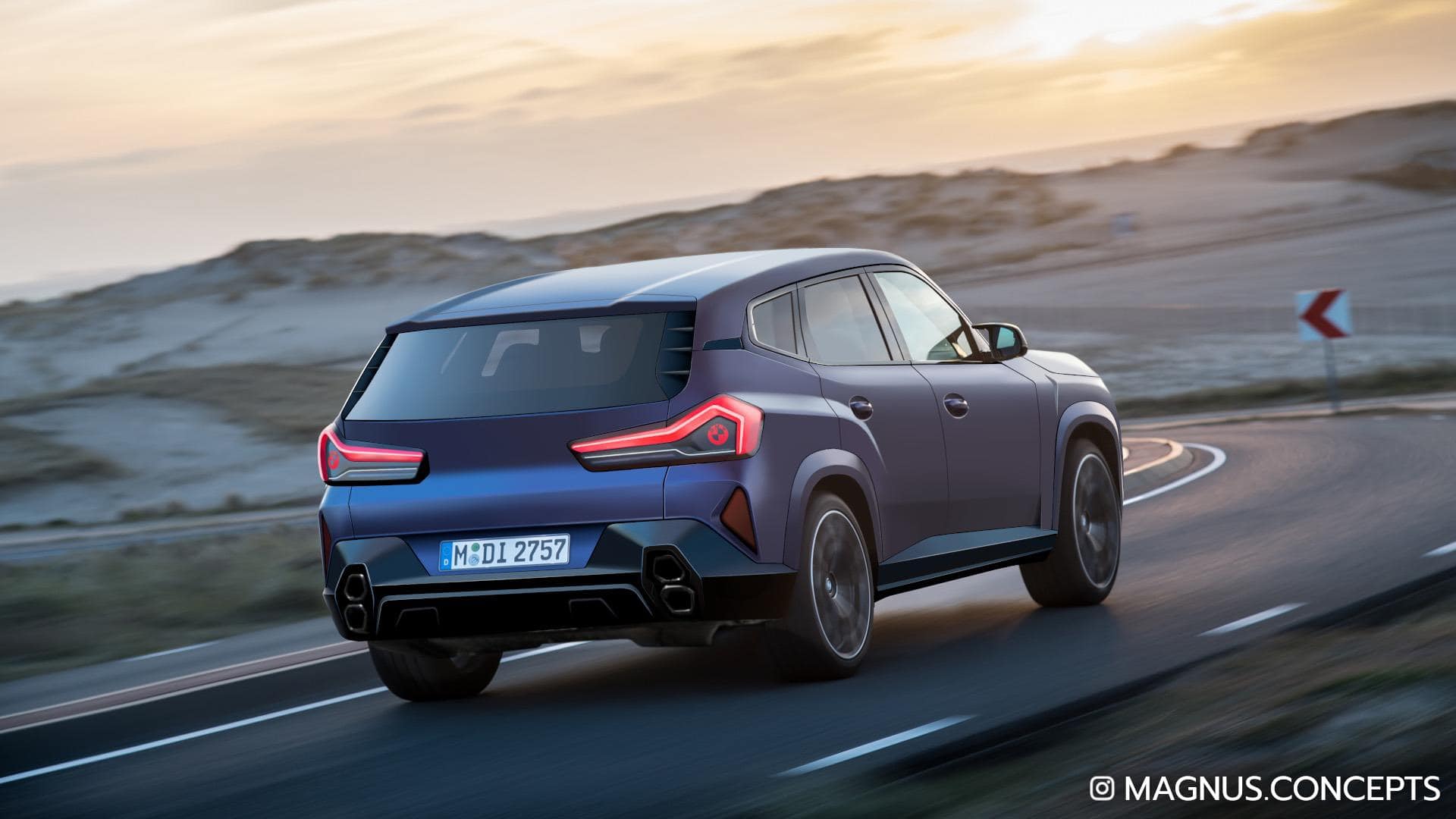