7.9% of total BMW Group car sales in 2020 were electrified vehicles 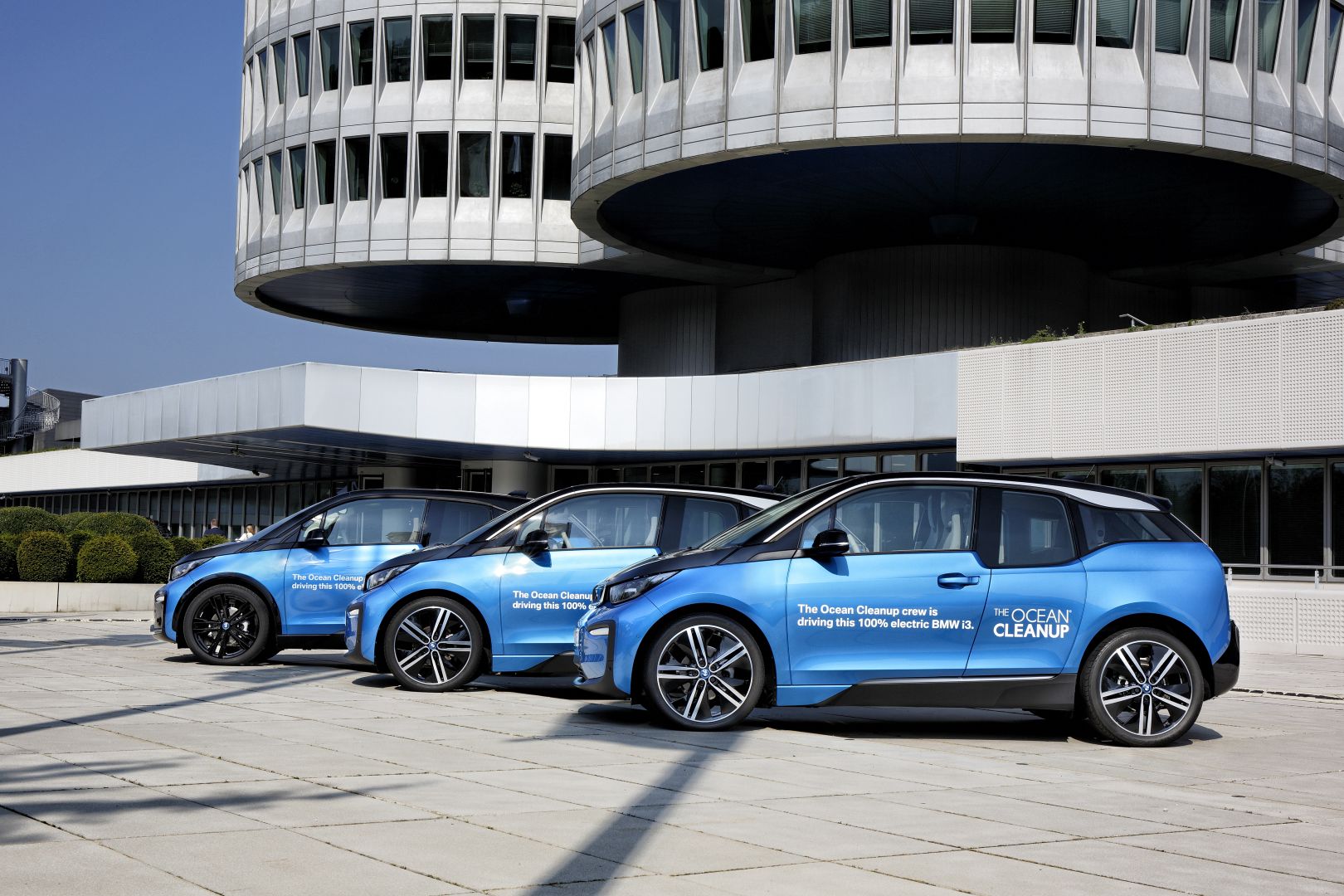 BMW’s electric offensive continues in 2020. According to a press release issued today, 7.9% of total BMW Group cars sold in 2020 were plug-in hybrids and electric vehicles. The car registration data for the first five months of this year comes from IHS Markit and concerns only passenger cars. In Germany, BMW brand was the second most popular plug-in brand with a market share of 12 percent. The top spot went to Volkswagen – 17 percent – followed by Audi with 11 percent and Mercedes-Benz 10 percent. Combined, the Big 4 German automakers control more than half of the electrified market in Germany. In the U.S., so far this year 4.5% of BMW Group cars were plug-ins, which is noticeably below the market average of 5.1%.

Taking a broader view in Europe and BMW still ranks high on the chart. 10 percent of the electrified market went to BMW in 2020, on par with Volkswagen and slightly ahead Tesla and Renault – 9 percent. Globally, BMW’s share is 7 percent, same as Volkswagen’s, but far behind the market leader Tesla – 22 percent. 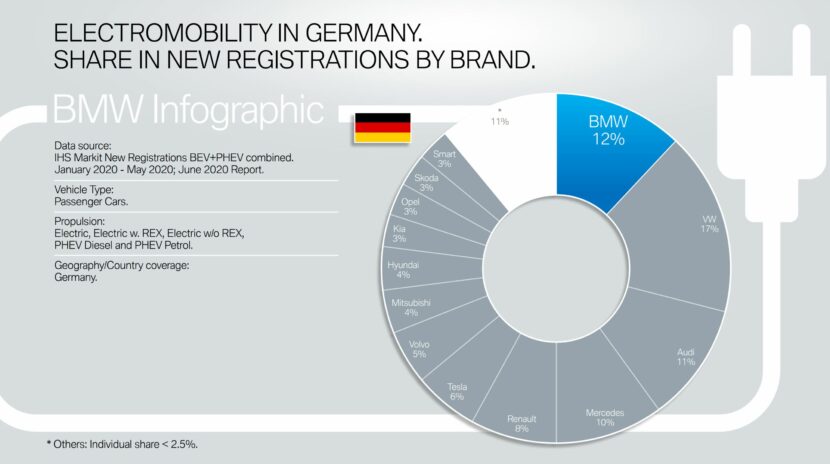 Moving towards the product lineup and the BMW i3 continues to bring in a decent amount of sales. The i3’s share in the compact electric vehicle segment is 8 percent. The most popular models are Renault ZOE (28%), Volkswagen e-Golf (19%) and Nissan LEAF (15%).

The top electric markets for BMW are the following: Norway (85 percent), UK (12.4 percent), Germany (11.2 percent), U.S. (4.5 percent). In all these markets, but the United States, the share of electrified vehicles sales in 2020 is higher than the models with a combustion engine. 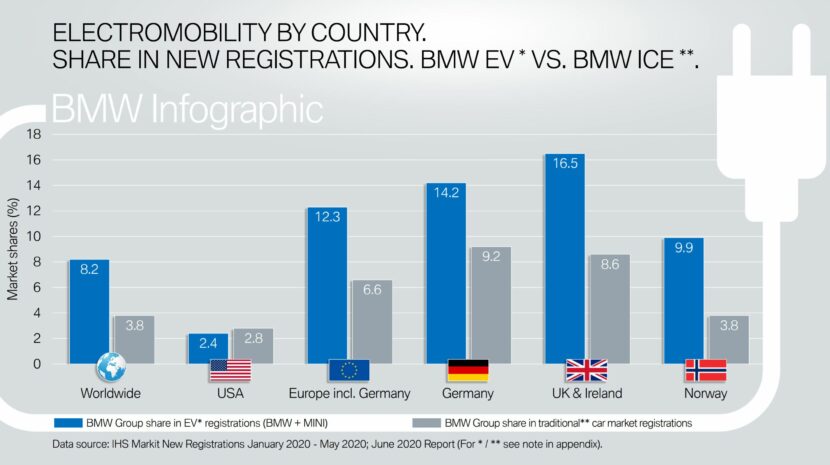 By the end of 2021, BMW aims to have more than one million vehicles with electrified drive systems on the road. A quarter of the vehicles sold by the BMW Group in Europe will be electrified by 2021: this share will increase to a third by 2025 and to half by 2030. The BMW Group plans to expand its range to include 25 electrified models by 2023, more than half of which will run on electric power alone.

Production of the all-electric BMW iX3 will begin before the end of 2020, followed by the BMW i4 and BMW iNEXT the following year. The new MINI Cooper SE electric was also recently launched. 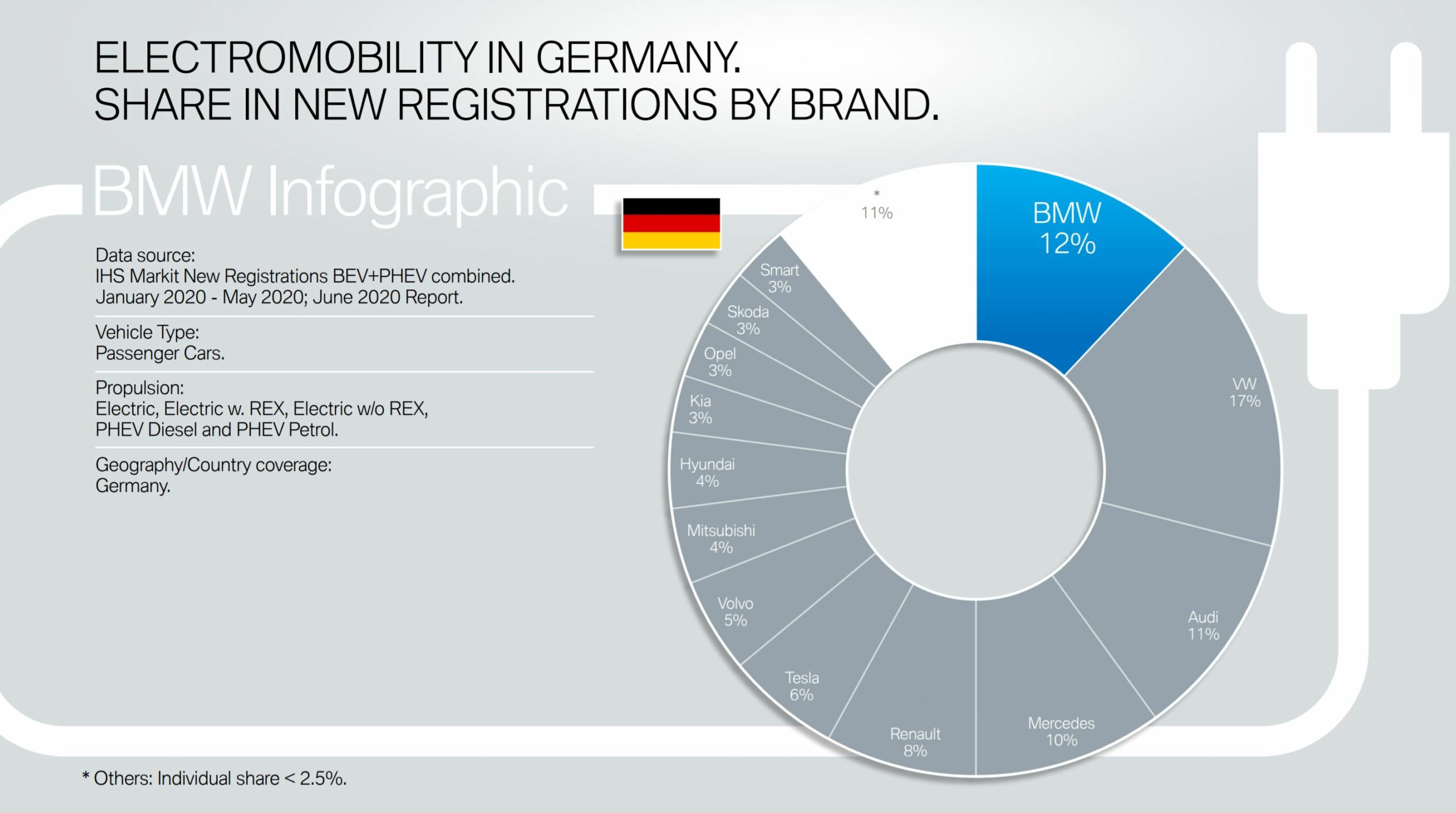 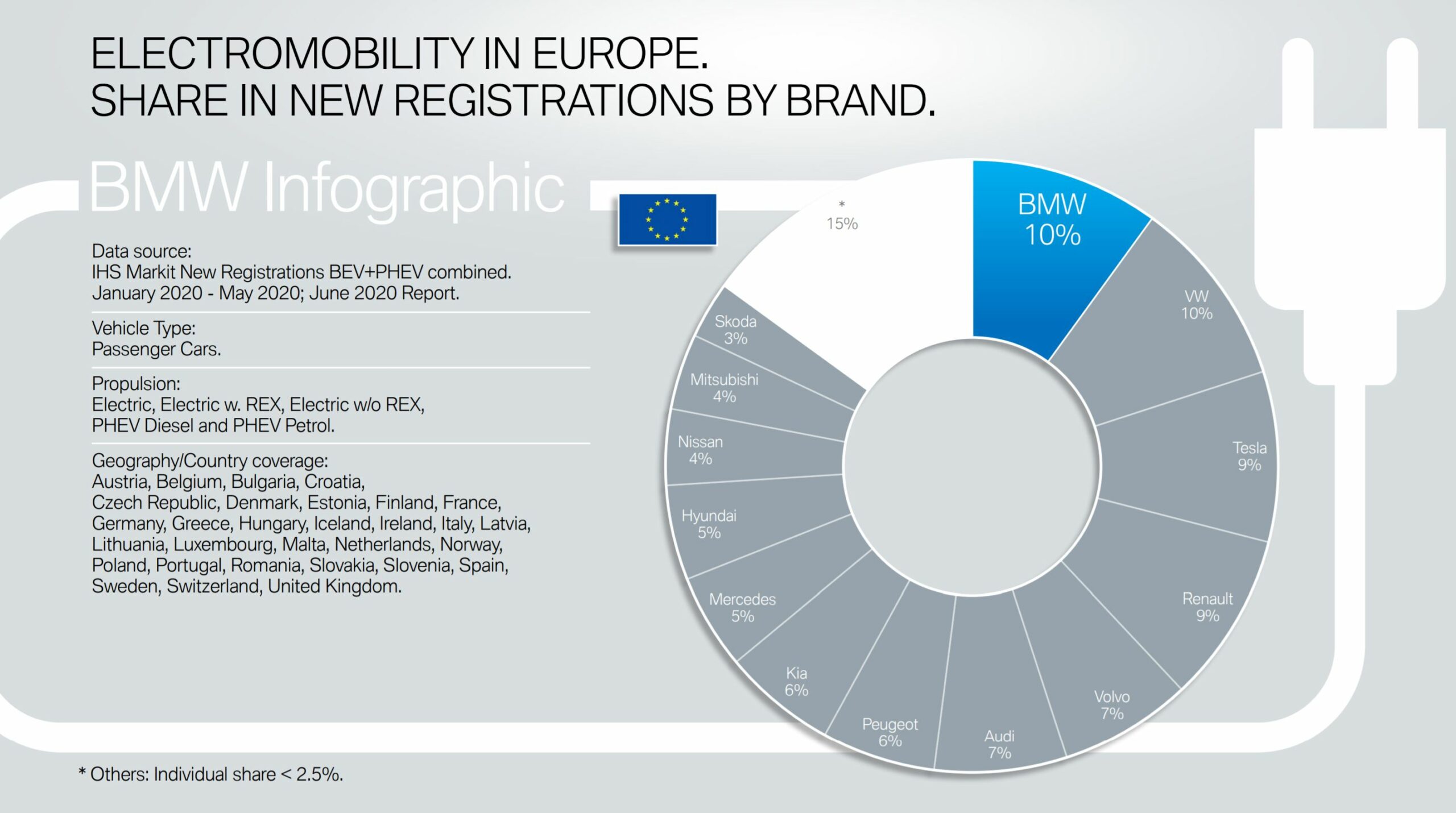 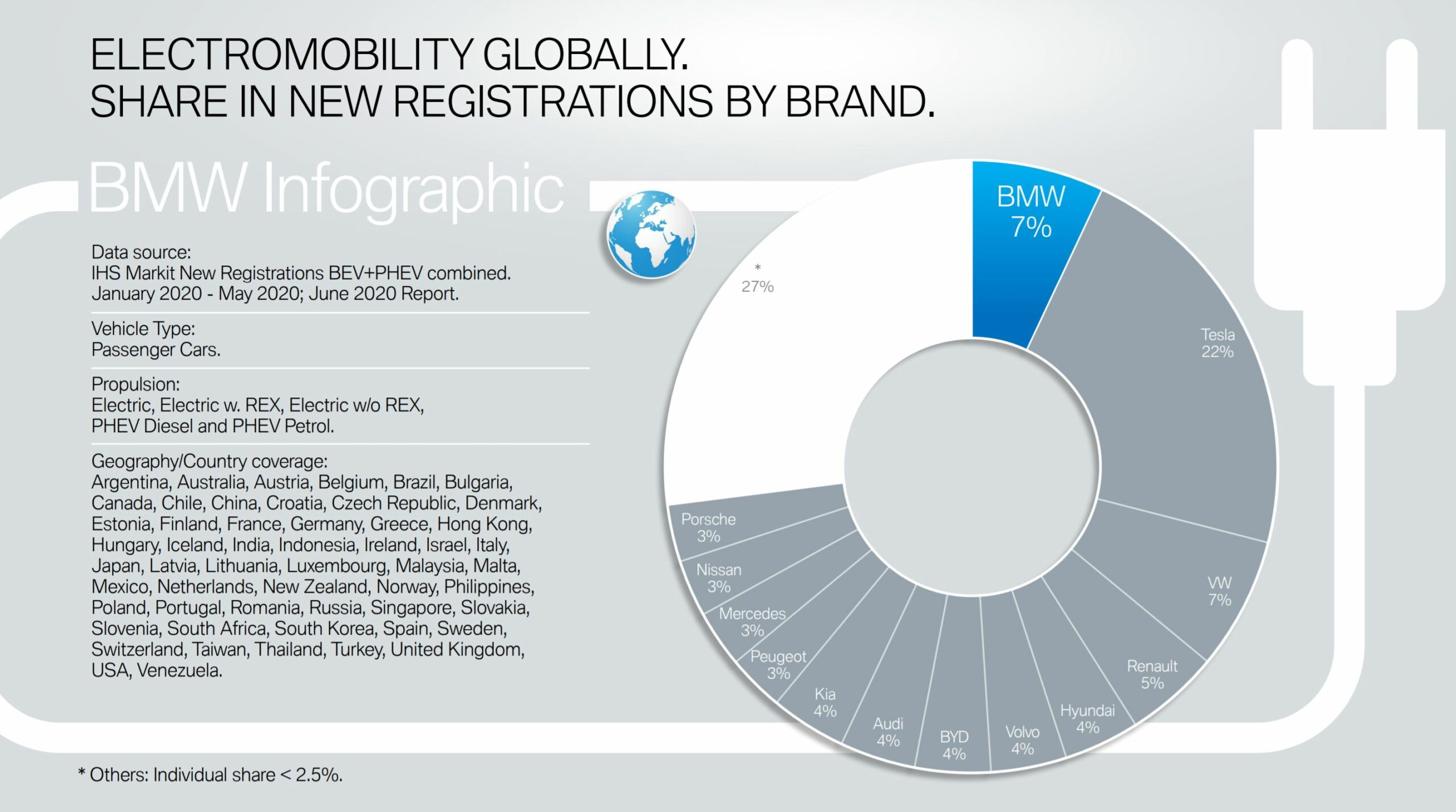 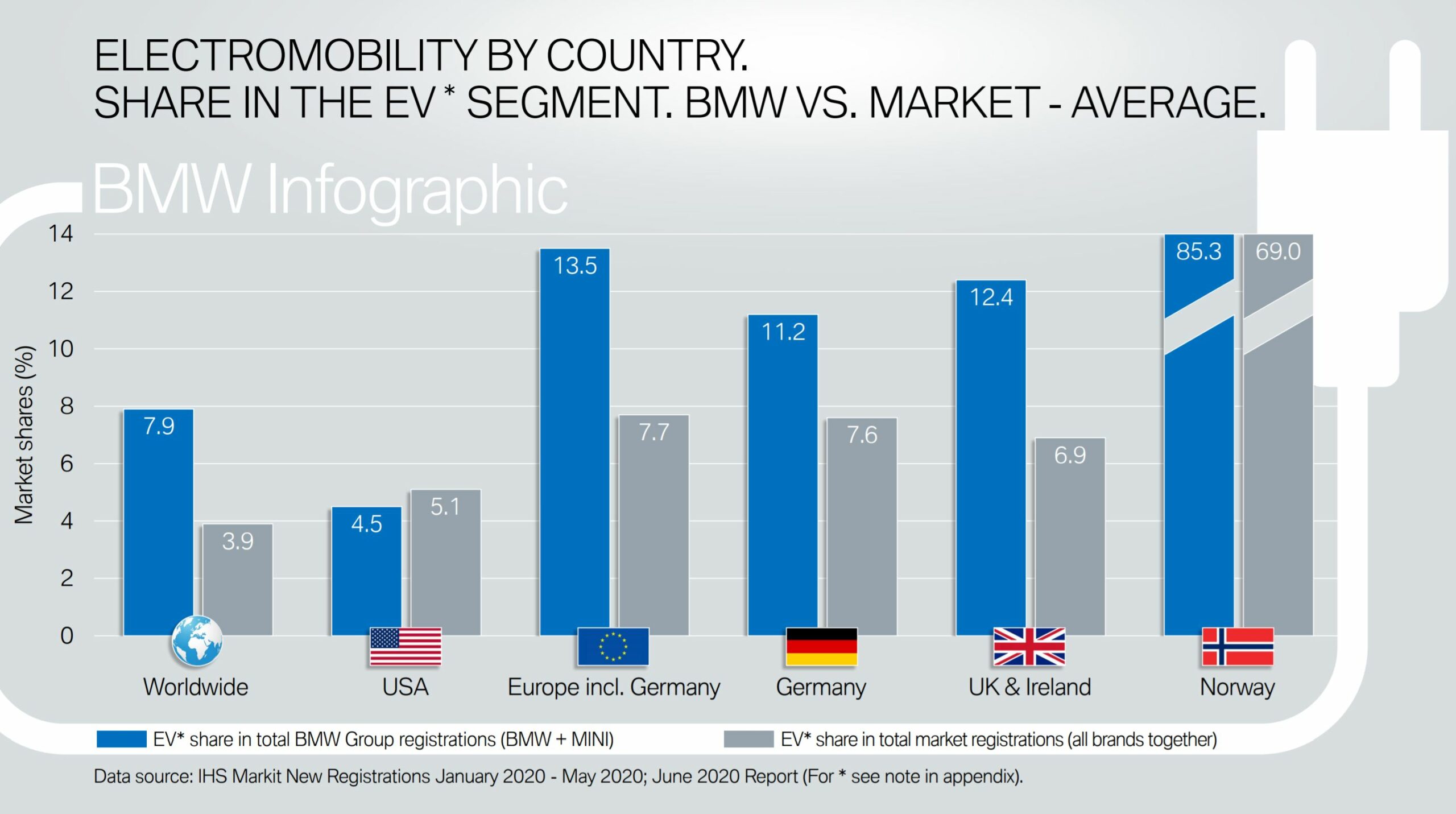