Video: BMW 8 Series Returns to Nurburgring as the Track Reopens

It’s March, which means it’s time to get back on the Nurburgring to test all the upcoming models from BMW. The engineers are already hard at work on the Green Hell and the first industry pool testing session already took place earlier this week. And guess what car showed up all dressed up in camo and ready to rumble? The BMW 8 Series, of course, by the sound of things, fitted with a V8 engine under the hood.

By the looks of things, we’re not dealing with the highly anticipated M8 here but rather with a more down to earth model such as the 850i. Sure, it has quad tailpipes at the back but other than that no other hint is giving us the perception that this is an M model. The brakes seem rather standard and the much-coveted BMW M mirrors are missing, making identifying this particular model quite hard to do. 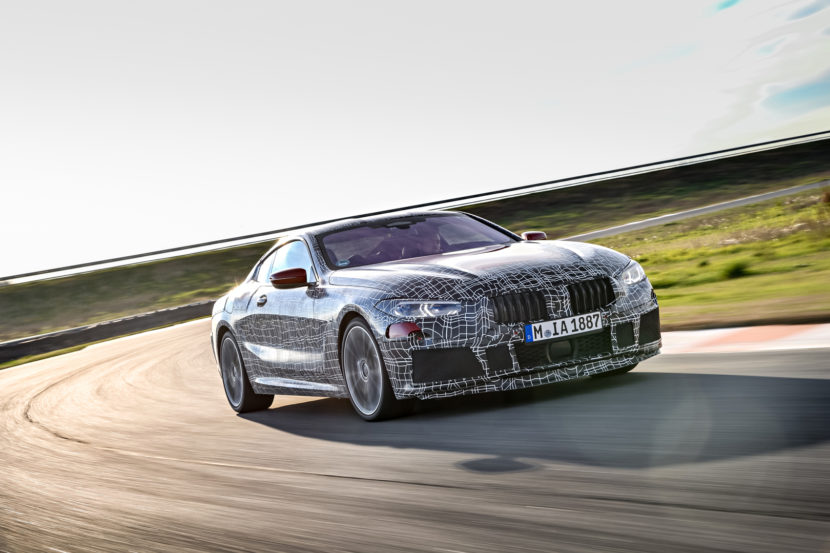 Nevertheless, if there’s a V8 under the hood, it’s one of only two cars: the 850i or the M8. If it’s the former, it will most likely become M850i by the time it comes out, in a similar fashion to what happened to the BMW 550i when the G30 generation was launched. The M Performance model will most likely be using the same 4.4-liter V8 as its 5 Series brother but tuned to make more than 500 HP according to one of our sources.

Furthermore, there will be some standard features included to make the car feel different from the non-M Performance models out there. It will get M Sport brakes, an M diff, rear spoiler, active steering, M steering wheel and upgraded seats. Optional features will include various 20″ wheels, M seat belts, M adaptive sport suspension, carbon fiber roof, carbon fiber exterior elements and a choice of a couple of new colors like Barcelona Blue, Sunset Orange, Sonic Speed Blue or Dravite Gray, which is an all-new color.