Tesla Model 3 vs BMW 3 Series vs Mercedes-Benz C-Class, per Bloomberg

When the first reviews started to trickle out of the extraordinarily highly-anticipated Tesla Model 3, many enthusiasts started to realize that Tesla was not targeting the Chevy Bolt, BMW i3 or other traditional EVs. Instead, Tesla is now targeting the BMW 3 Series and Mercedes-Benz C-Class. We recently spoke about this as well, considering that the Model 3 and 3 Series are almost the exact same size, pack similar performance and similar luxury. There were some doubters who felt that comparison was simply misguided. Now, though, Bloomberg has created a chart that helps prove our point.

In this chart, the 3 Series in question in a 320i, when a 330i is probably the better comparison. If you substitute the 320i for the 330i, it begins to make even more sense and the numbers line up more evenly.

So using the BMW 330i, Tesla Model 3 and Mercedes-Benz C300, you will notice that all three are about as fast as each other from 0-60 mph. The Tesla and the Bimmer both get it done in 5.6 seconds, while the Benz does it in 5.8. In terms of efficiency the Bimmer and the Benz are basically a wash, with 23/35 mpg and 24/34 mpg, city/highway, respectively. The Model 3, obviously, stands out here. With its 100+ mpg-e, though that’s a bit difficult to actually compare. Still, though, it’s hard to argue that the Model 3 isn’t the most efficient car here.

In terms of length, all three cars are within a couple inches of each other, with the Model 3 and C300 being the longest at 184.8 and 184.5 inches, respectively and the Bimmer at 182.5 inches. As for wheelbase, the Model 3 is longest, at 113.2 inches, with the Mercedes next at 111.8 inches and the BMW the shortest at 110.6 inches. So as far as size and performance, these cars are very similar.

One of the most important factors of these cars is weight and it’s typically where electric cars struggle. Batteries are very heavy, which typically puts EVs at a disadvantage in weight. But the Model 3 is rather svelte for an electric car, tipping the scales at only 3,549 lbs. The Mercedes is the next heaviest at 3,417 lbs and the Bimmer is the lightest at 3,370 lbs. 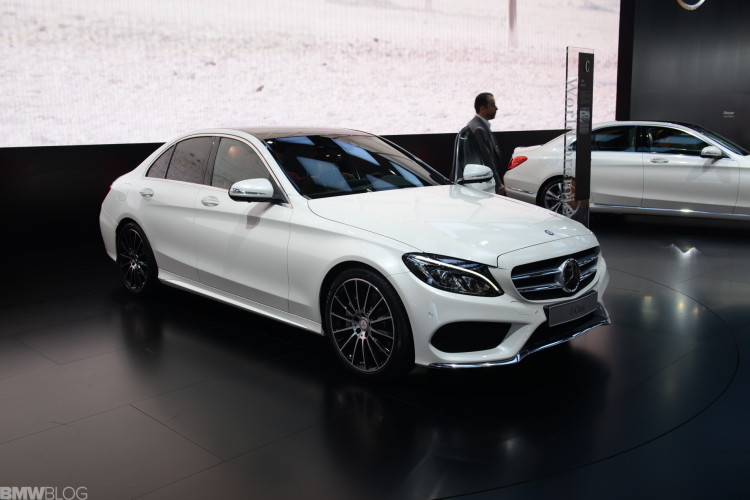 As far as technology, each car has their own autonomous driving aids and each come with similar tech. The big difference is in pricing. The Mercedes-Benz C300 starts life at $40,250, making it the most expensive. We swapped out Bloomberg’s BMW 320i with a BMW 330i, which rings it at $38,750. The Tesla Model 3 starts at $35,000 and gets even cheaper after government tax incentives. So the Model 3 has the base price nailed down.

These are just spec comparisons, as we can’t test the Model 3 just yet. However, on paper, it’s remarkable how similar these cars are and it really shows where Tesla was aiming with the new Model 3. Some may argue that the Model 3 doesn’t compare with traditional ICE (Internal Combustion Engine) vehicles but Telsa has been very clear that its newest car isn’t supposed to just be a great electric car but a great overall car. So if it wants to be considered the best car in the segment, it’s going to have to take on traditionally-powered cars. And it seems up to the task.

26 responses to “Tesla Model 3 vs BMW 3 Series vs Mercedes-Benz C-Class, per Bloomberg”