Back in the ’60s and ’70s, the rivalry between BMW and Alfa Romeo was very much alive, as they both produced some of the best sports sedans the world had seen. Fast forward 40-50 years and that rivalry is basically dead, with Alfa not having created a genuine sports sedan good enough to compete with the Germans in years. Until now, that is.

Welcome the Alfa Romeo Giulia Quadrifoglio Verde. Top Gear’s been driving it and it seems like it has the BMW M3 square in its sights. 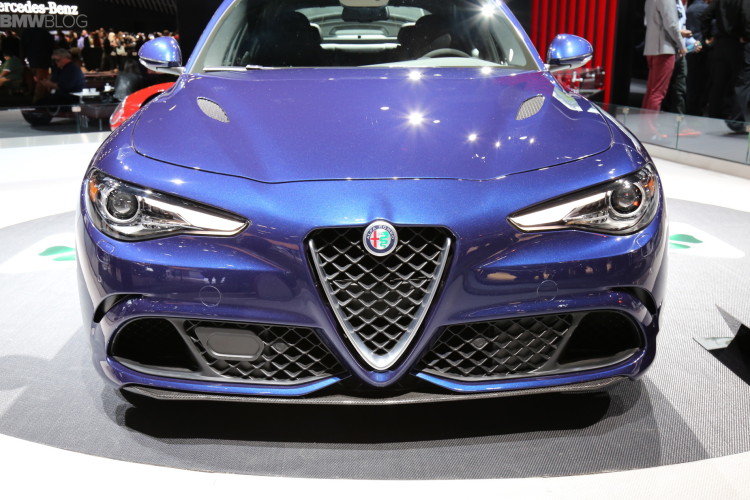 The Quadrifoglia Verde (QV) is the hottest and highest performing variant of Alfa’s new Giulia sedan. It’s the BMW M3 competitor and the one that Alfa is hoping will draw BMW customers away. Packing a 2.9 liter twin-turbocharged V6 engine that develops 503 hp and 440 lb-ft of torque, which is a lot more than the M3’s 425hp and 440 lb-ft, the Giulia QV certainly seems to have the M3 beat for power. That mighty “Ferrari-inspired” engine is mated to either an eight-speed ZF-sourced automatic or a six-speed manual, the latter only available in certain markets, the US market being one of them. Top Gear didn’t get to capture any exact performance figures, but tester Ollie Marriage, who actually daily drive a BMW M3, claims that it feels about as fast as his daily Bimmer.

Much like the BMW M3, power is sent to the rear wheels through an electronically-controlled differential, which is able to send up 100 percent of the power to either wheel. This allows the Giulia QV to be extremely playful and predictable through corners. It’s said that on power exit, the Giulia QV playfully slides just a bit before firing down the road in a safe and predictable manner. But it will also let you be a complete hooligan and do fun sideways stuff in clouds of tire smoke.

The steering is said to be very quick, very accurate and very nice, but also a bit too light and devoid of feel. Sound like another sport sedan on the market? However, the Giulia QV does turn in with great accuracy and fills the driver with confidence. There’s actually a bit of body roll in the QV, more than Top Gear expected, but that actually lends a sort of fun quality. It’s not overly stiff and is actually quite supple, which makes it a bit more fun to throw around. There’s more drama in hard cornering and it allows the driver to really feel the limits of the car. I once heard American racing driver Randy Pobst say that, in terms of suspension, soft is grip if you can handle the roll. I guess Alfa Romeo feels the same way. But even if it doesn’t allow for more grip, it will likely be the more comfortable daily driver.

So, apparently, the Giulia QV goes, stops and drives fantastically, all good enough to give the BMW M3 a fright. But is the rest of the car any good? Modern Alfas have taught us that they can be great fun to drive, but seriously compromised everywhere else. Like the Alfa Romeo 4C, which is incredible to drive hard on a track, but falls apart on the road, with its non-assisted steering, incredibly hard suspension, terrible interior quality and lack of pretty much any modern automotive creature comfort. So does the same go for the Giulia QV?

Nope. Not at all, in fact. The Giulia QV’s ride, as mentioned earlier, is fantastic and its interior is lovely. While the interior materials might not be up to par with the rest of the Germans, its not far off and probably on par with the Jaguar XE. However, aesthetically, it’s really quite beautiful. I was able to catch the interior in person at the 2016 NYIAS, both of the QV and the standard Giulia sedan, and both were gorgeous. The interior is so different from what you get from any of the Germans that it’s immediately refreshing. I love BMW interiors for their superb build quality, perfect ergonomics and wonderfully thought out styling, but the Giulia’s cabin is far more endearing to me.

And that cabin beauty is matched in its exterior beauty. It’s a genuinely beautiful car to behold and it looks so much better in person. It’s bite-the-back-of-your-hand beautiful, it really is. And, again, it looks so much different from the Germans on the market, so it offers something fresh and interesting that customers haven’t seen before. Those headlights, the taillights, that lovely decklid spoiler that rises higher at the sides than it does in the middle. Don’t even get me started on those wheels. I think I’ve just had a crisis.

Overall, the Alfa Romeo Giulia QV is said to be the best Alfa Romeo is ages and equally as good as the German competition on the market. Alfa claims that pricing will be on par with the BMW M3, because of course it will be, and it will genuinely compete with the famous Bavarian both on paper and in the real world. After reading what Top Gear, and so many others, have to say about it, we have no doubt that it will most definitely be an exciting match-up. But most importantly, we’re just excited that the BMW/Alfa Romeo rivalry is back on. We’re in for some exciting new cars.