These two heavyweight German luxury cars have been at each other’s throats for decades, now, with the victor usually being the newer iteration of either vehicle. If the S Class is the newest car of the two, people tend to prefer it to the 7 Series and vice versa. That’s just the way it goes, the newer, fresher car is typically the better car. In this case, the BMW 7 Series is the newer car, the one packed with more modern tech, so will it follow the trend and be the better car of the two?

CNET’s new car show, Roadshow, decided to find out by pitting these two cars against each other on both the road and the track as well as testing their tech and interior comforts. They did hours of on-road testing in real-world situations but, thankfully, didn’t film all of that because it’d be boring. What they did show instead was the two cars hitting the race track. Will 7 Series or S Class owners ever take their luxo-barges to the track? Of course not. However, track driving actually proves a lot about the way a car handles, as it allows the driver to bring each vehicle to its absolute limit, therefor showing what the car can really do and what it’s actually capable of. 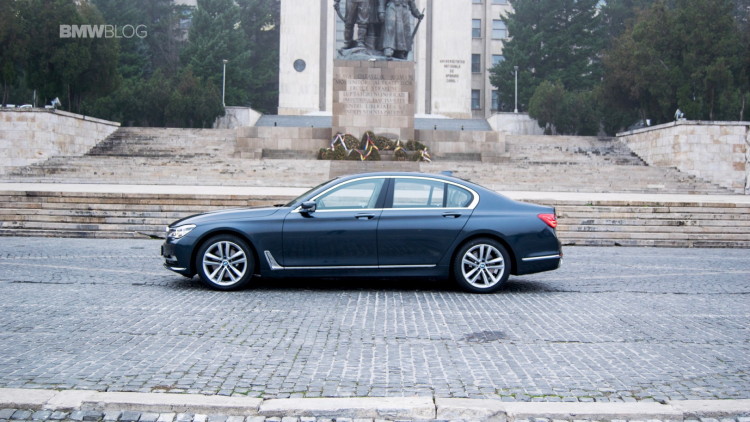 On the track, the 7 Series, somewhat unsurprisingly, beat the S Class over the head. The Big-7’s lightweight Carbon Core construction allows it to stay flat and planted, even through aggressive corners, while also offering great turn-in and actually fun driving dynamics. You can also thank the slighter stiffer variable dampers on the 7 Series, compared to the somewhat soft ones on the Merc. Where the 7 Series felt like a competent driver’s car on the track, the S Class felt the opposite. On the track, the S Class looked out of sorts, rolling a lot through corners and taking each turn at a much lower speed than the Bimmer. It’s also slower despite having more power, because of its much heavier chassis. However, the Merc’s softer, more compliant nature paid dividend on the highway and in traffic, as the CNET reviewers claimed it to be the better road car of the two, but only by a bit.

On the interior, it must be said that both cars are superb. However, they take very different approaches. The S Class is old-school and extremely luxurious, like a high-end cigar lounge. While the 7 Series is much more modern and high-tech, like a modern private jet. So it really comes down to taste. In terms of tech, something that CNET reviews very well given its technology background, the 7 Series was deemed the better car. Its technology is newer, superior and easier to use. It also feels more modern and more in-tune with the rest of our current technology, while the S Class feels a bit dated even though its only a couple of years old.

Overall, the 7 Series was the better car to actually drive and its interior is a bit nicer, thanks to its wonderful technology. Both reviewers chose the 7 Series as their choice of car, given that it was better overall. The Merc had a very compliant ride and was incredibly smooth in traffic and on the highway. But the 7 Series is good at that stuff as well while also offering superior driving dynamics and more useful interior technology. So according to CNET, the BMW 7 Series is the new winner and keeps the trend alive.