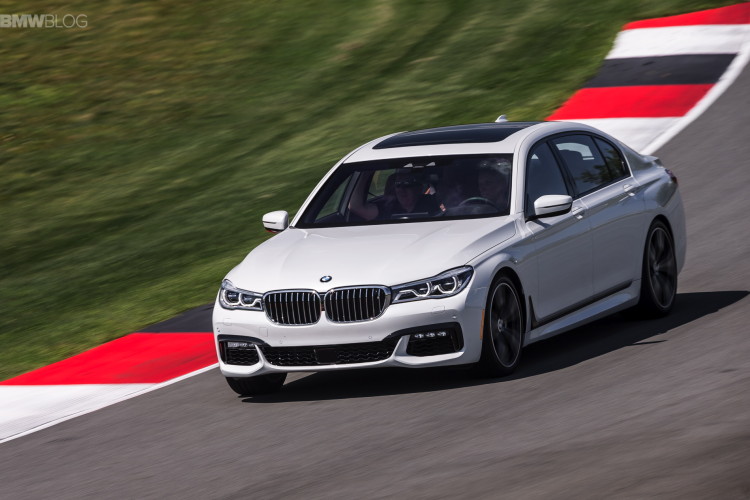 When BMW told us we’ll be heading to Monticello race track in Upstate New York to drive the new 2016 BMW 7 Series, our first though was: “What are they smoking…” Historically, the 7 Series has never been a track car, nor it claimed to be one, but the new 7er seems to be the most confident of the bunch and dared us for a date on the beautiful track.

One of the biggest reasons it’s so confident is its Carbon Core lightweight construction.

The chassis of the new BMW 7 Series, which will also be shared with the upcoming 5 Series and other future models, has been developed with extensive uses of carbon fiber, aluminum and high-strength steel. The all of these exotic materials have been strategically placed in the chassis to create a very lightweight, very rigid and very safe structure in which to build upon. For instance, the A, B and C pillars, as well as much of the roof, are all built using carbon fiber. This makes the chassis very stiff, reducing chassis flex which improves handling, but also reduces weight up top, lowering the center of gravity to further improve handling.

From 0 to 62 mph, the heavy athlete needs only 4.3 seconds. That’s M performance right there.

The Carbon Core savings enable staggering numbers despite being an inch longer, the new base model manages to trim a stunning 130 kilograms (280 lbs) compared to its predecessor. From 0 to 62 mph (100 km/h), the heavy athlete needs only 4.3 seconds. That’s M performance right there! Furthermore, BMW engineers added a new suspension system that consists of a double wishbone setup up front and five-link kit in the rear, along with a standard air suspension with electronic dampeners and all-wheel steering system that uses electronic actuators.

While in photos the G11/G12 7 Series looks nothing more than a glorified F01/F02 facelift, in reality the BMW design team has done a great job improving upon an already successful design language. The sedan comes with the largest kidney grille we’ve seen on any BMW in the last decade, a 3D approach to the famous and iconic grille which now employs active slats for aerodynamic purposes. BMW says that the opening and closing of the aero slats is controlled by the computer to help with the engine cooling. 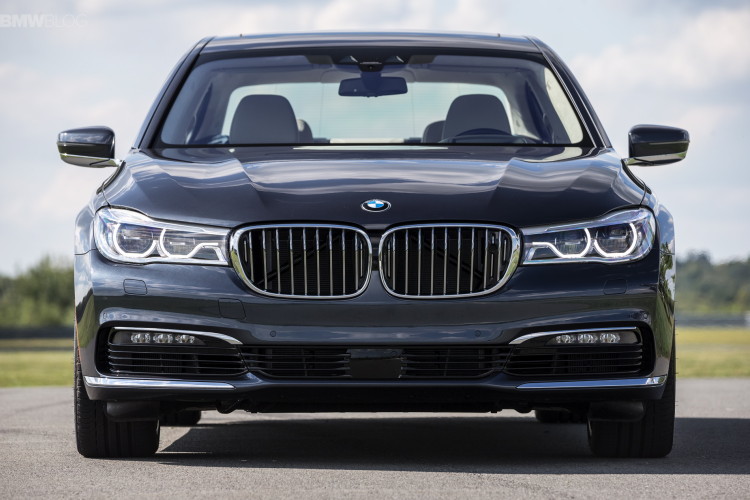 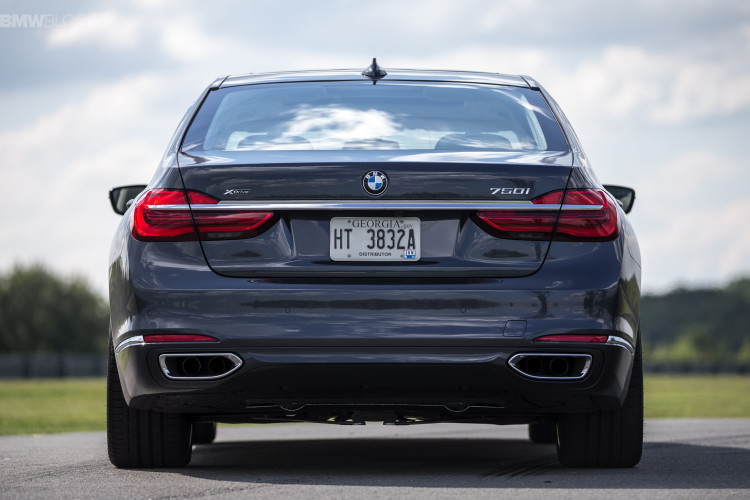 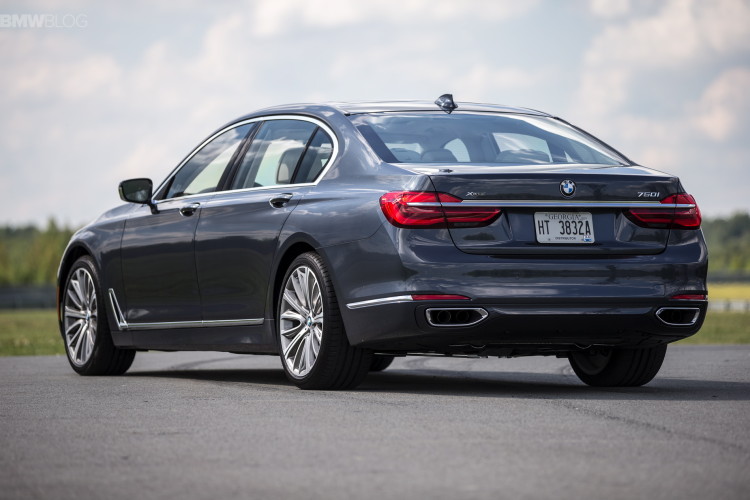 The redesigned LED headlights are slimmer and more attractive than on the previous generation 7 Series, and following the recent BMW design language, they now flow seamlessly into the kidneys. The sculpted front hood is also lower and leaner, a design approach to emphasize sportiness and dynamics. The one piece Hofmeister Kink flows elegantly across the quarter panel and fits perfectly within the 3D sculpted model around it. There’s also a new design item, an air breather, now typical of most BMWs, which has a strip of either chrome or black, depending on the Line chosen, which runs the length of the bottom of the doors.

Long gone is the Bangle-butt and the new 7 Series has one of the most attractive rears in the segment. The trunk molds perfectly into a new set of taillights which are also slimmer and beautifully sculpted, thanks to the constant improving LED technology.

The new cabin makes the previous generation look outdated and simplistic, by any standards

What everyone agrees on is the revolutionary design of the interior. BMW took a hard look at the previous generation 7 Series and decided that a game changer is needed in order for the new 7 Series to be successful in this competitive market. The new cabin makes the previous generation look outdated and simplistic, by any standards. The materials, leather and trims used are of the highest quality possible. From the moment you step inside, it becomes hard to ignore the amount of work that went into creating a viable competitor for the S-Class. The leather with ample stitching and unique design resembles the ones found in even higher-end cars and it’s as comfortable as it can get. Everything within arms reach is covered in either leather, beautifully finished wood or aluminum. 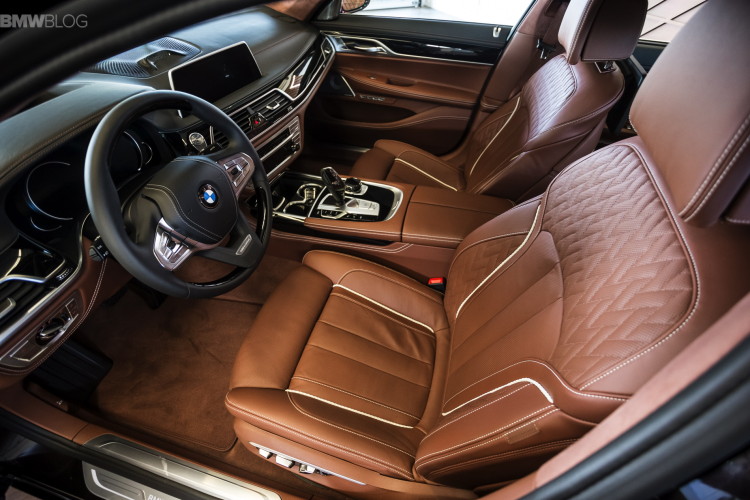 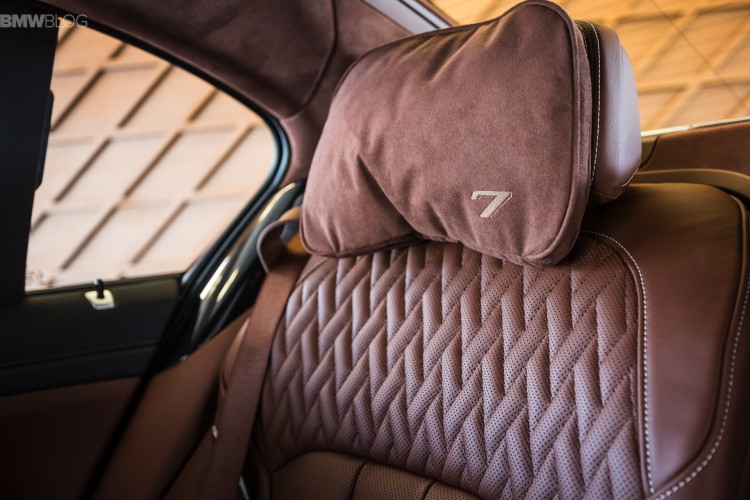 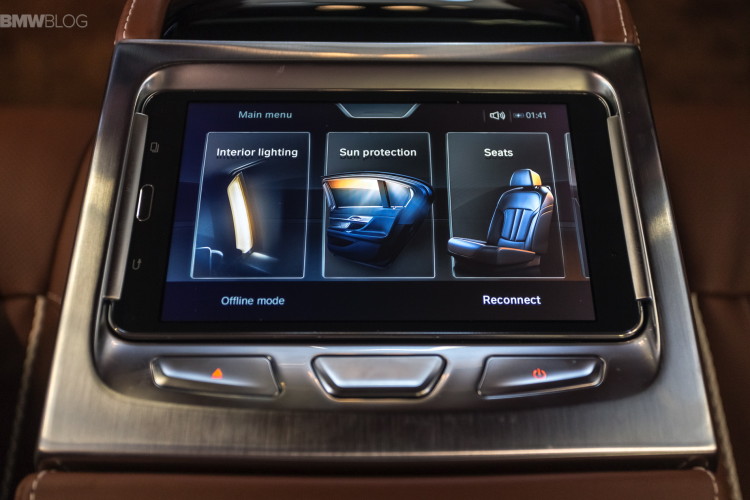 Galvanized metal and porcelain switches, touch-sensitive temperature sliders for air-conditioning vents, replace the familiar BMW switches. There is ambient lighting everywhere, on the door trim, in the footwells and under all of the controls, and the optional Panoramic Sky Lounge LED Roof with light emitted by LED modules on the glass surface, is not only beautiful, but also a work of art. 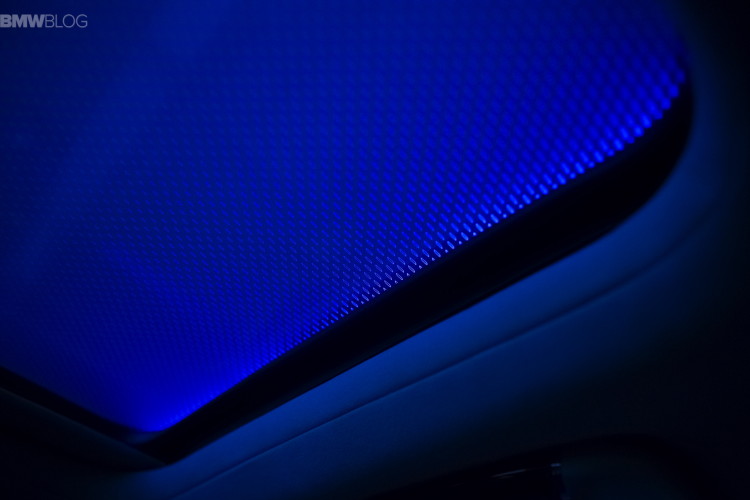 From the back seat, the beauty of this limousine is a sight to see

To really experience the luxury of this new 7 Series we had a driver take us on the road. From the back seat, the beauty of this limousine is a sight to see. Everything has been perfectly matched, the leather and wood can be felt even when opening or closing the door, and the stitching on the leather gives it a Rolls Royce look. The Luxury Rear Seating package is optional but if money is no object, this should be on your list. The luxury package includes Rear Ventilated and Comfort Seats, Heated Front and Rear Armrests and a 7 inch Touch Command Tablet. The massage function for the comfort seats offers a choice of eight programs. 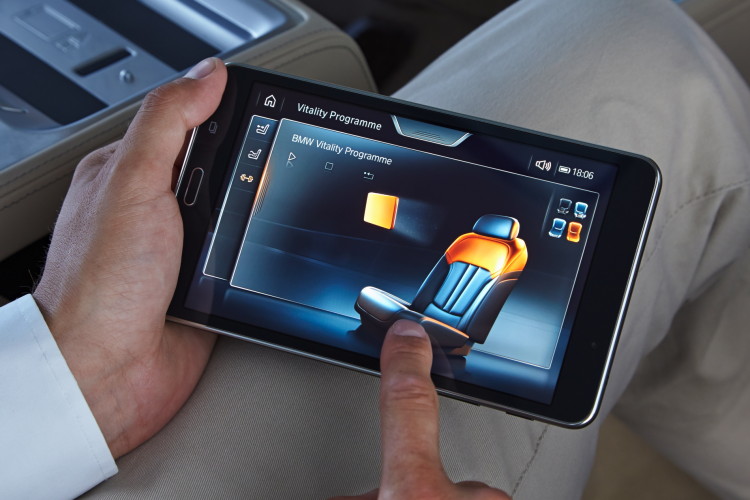 An optional Rear Executive Lounge Seating Package takes the luxury to a new whole new level transforming the car into a mobile office. A high-quality one. With a touch of a button, the rear seat can be slid forward by an extra 90 millimeters /3.5 inches and its backrest tilted all the way forward. By pressing another button, a fold-out footrest extends from the back of the front-seat. To top it off, a tray table can be pulled out from the rear center console to allow you to do some work on-the-go. 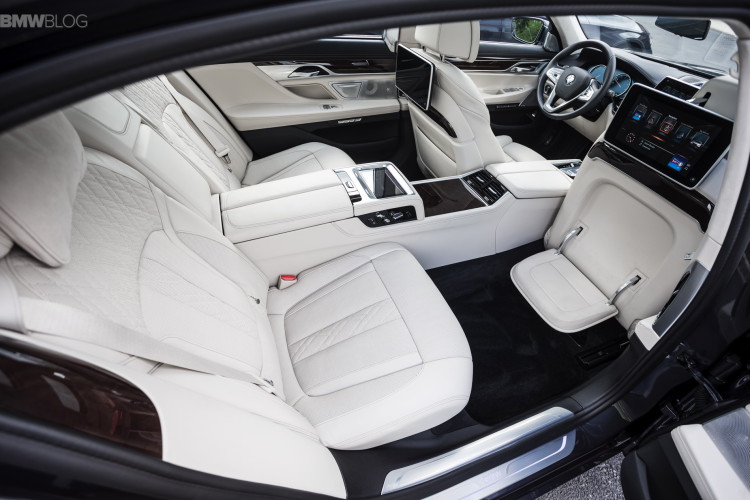 An industry-first, Gesture Control, was made for people to easier operate the infotainment system through gesture controls. The drivers or the passengers can adjust volume controls, accept or reject incoming calls or change music stations through pre-defined gestures. Drivers can also configure a gesture for a function of their choosing, such as navigation to the home address, a deactivation of a screen or a pre-set radio station. BMW says the system operates based on an infrared motion sensor located in the headliner. While it doesn’t replace the traditional iDrive controls, the gesture technology can help with driving distractions and easier access to most commonly used features. We did a live Periscope from inside the car and Gesture Control got the most likes. 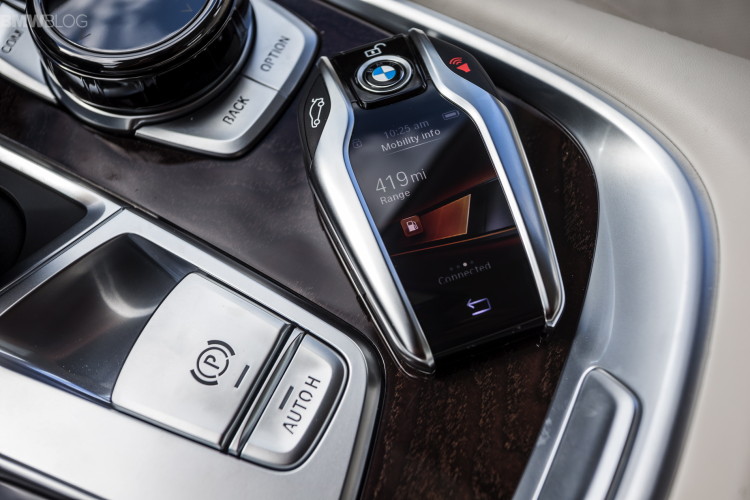 The other cool item we’ve played with was a high-tech keyfob. Dubbed BMW Display Key, the touch-sensitive key is an optional item for the new 7 Series and in the U.S., it only costs $250. For that little amount – which is cheaper than many other BMW keyfob replacements – the key features four buttons on the front for lock, unlock, trunk release, and panic. In Europe, the BMW Digital Key can be used to self-park your 7 Series, a feature that has yet to be approved by the U.S. regulatory boards. The display runs on a separate battery than the lock/unlock buttons, so the key’s battery has about a week long life and can be recharged wirelessly in the car’s armrest.

BMW has been paying close attention to the autonomous innovations on the market; some of them were previewed earlier this year at the Consumer Electronics Show in Vegas. The 7 Series can now steer itself at speeds up to 130 mph, but the caveat is that you can only keep your hands off the wheel for 15 seconds at a time. So no texting and driving aids. This new 7 Series also includes an available Active Comfort Drive with Road Preview system that scans the road ahead and then adjusts the suspension accordingly.

Nimble And Fun To Drive 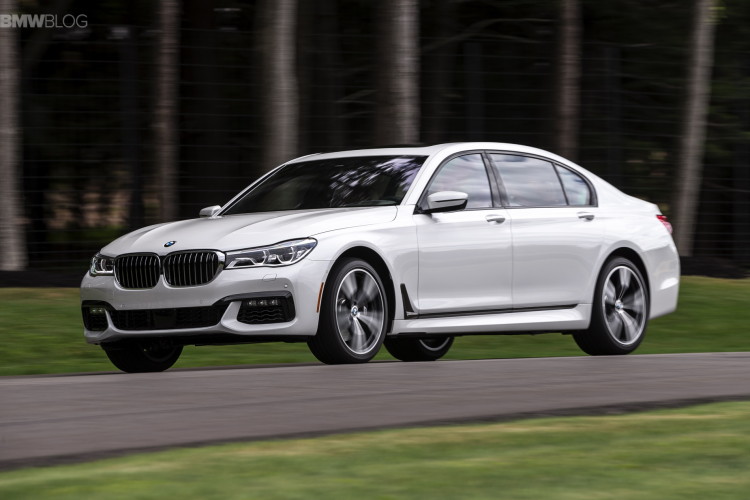 Now in its sixth generation, the 2016 BMW 740i/750i and 750i xDrive offer a 320-horsepower inline-six and a 445-horsepower V8 twin-turbo power. Models coming to the U.S. will be long-wheelbase only with BMW dropping the “L” designation from the model lineup, a trend that it’s now common in the luxury sedans segment. In Monticello, BMW handed out the keys to the 750i with the Luxury Line or the M Sport Package. On back roads around Monticello, the new 7 Series tracked through corners at speeds that we usually see in M cars. The 750i manages to hide well its size and weight and just feels like an old-school bimmer. The steering is heavier than what we’ve seen lately and the connection with the road can easily be felt through the thick steering wheel. The snappy eight-speed transmission links to the navigation system, so gear selection is adapted to the driving situation and route, adjusting shifting characteristics accordingly. 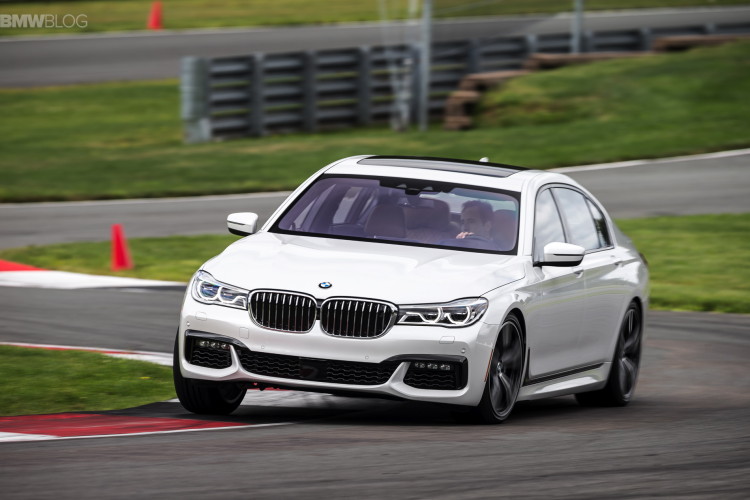 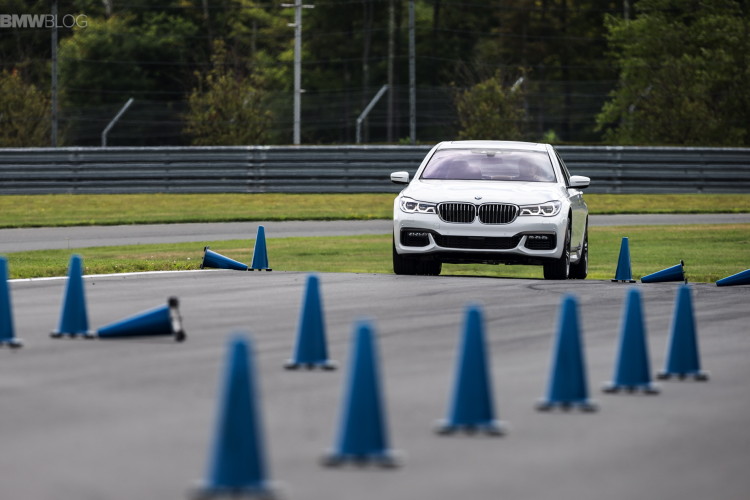 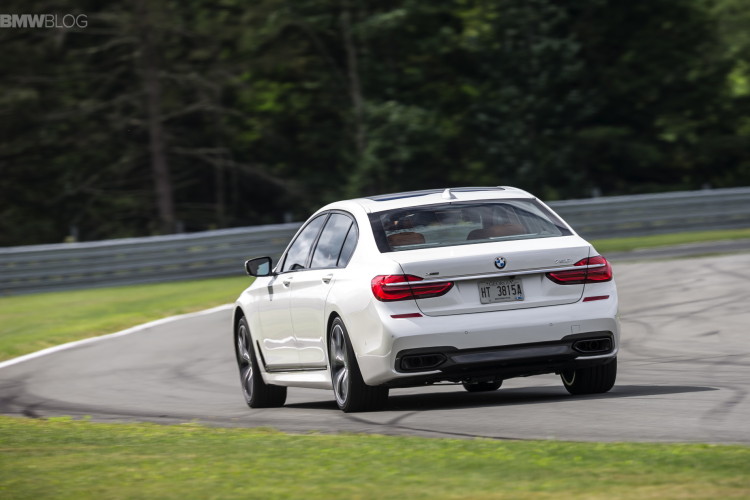 The lower center of gravity, weight savings and new chassis and suspension is even more obvious on the track. Over the course of five hours, we lapped the Monticello track at least twenty times and with each lap, the luxury sedan was more fun to drive. And as expected, the 750i is best enjoyed with the suspension turned to Sport – the perfect combination between comfort and sportiness. The four-wheel steering is also phenomenal and when thrown in corners, the 7er felt shorter than it really is. Keep in mind, this is a 4,600 lbs car and twenty years ago taking this car on a track would have likely gotten you banned.

The 750i felt like a rocket ship and at 4.3 seconds is just about a tenth-of-a-second slower than the super duper M5 sedan.

On straight lines, the V8 power and exhaust growl come to life. The 750i felt like a rocket ship and at 4.3 seconds is just about a tenth-of-a-second slower than the super duper M5 sedan.

Even on the slalom course, the ride and body control are excellent – we tested the car in Comfort, Sport, Sport+ and Adaptive – and the 7er arced through the cones like a smaller car. At the end of the course, after a 60-70 mph run, the BMW driving instructor advised us to slam the brakes as hard as we could and…the stoppage distance was impressively short. 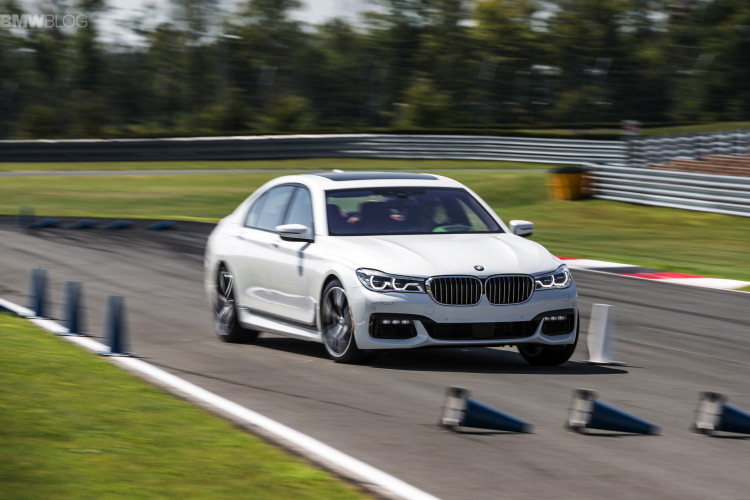 Yet, we didn’t stop here. Next we headed back to the track where BMW RLL driver and multiple-times racing champion, Bill Auberlen, was present to guide us through the track and its racing line. After a short stint behind his pace car, we asked Bill to take the reign of our 750i and show us how it’s properly done. What followed was a ten minutes exciting ride where we finally understood why we’re just amateur track drivers, and that this 7 Series has more potential than we could ever unlock. Take a look at the video below and listen to Bill’s commentary, he makes some interesting points and you can also see how easy maneuverable the car is.

As Bill mentioned, the 7 Series is not a track car and its customers are likely to never see the tarmac, but it feels good to just know that YOU can and you wouldn’t actually embarrass yourself by doing so.

In the last few years, the Mercedes S-Class has been the undefeated champion in this important luxury sedans segment. Many have tried to dethrone it, but it stood tall and fended off its opponents with grace. Now the new 7 Series is without a doubt its strongest rival and one that could take the crown away. It has all the ingredients to achieve that: design, luxury, technology and lightweight construction. The new 2016 BMW 7 Series arrives this month, priced from $81,300 to $94,400. Of course, you’ll all want to know how it compare to Mercedes’ S-class? That answer must wait until we drive the two side-by-side.

The new 2016 BMW 750i has all the ingredients to dethrone the Mercedes-Benz S-Class: design, luxury, technology and lightweight construction

BMWBLOG Test Drivesfeatured
Previous post Is now a better time than ever to buy a BMW 335i?
Next post Alpine White BMW E46 M3 with Vorsteiner Wheels