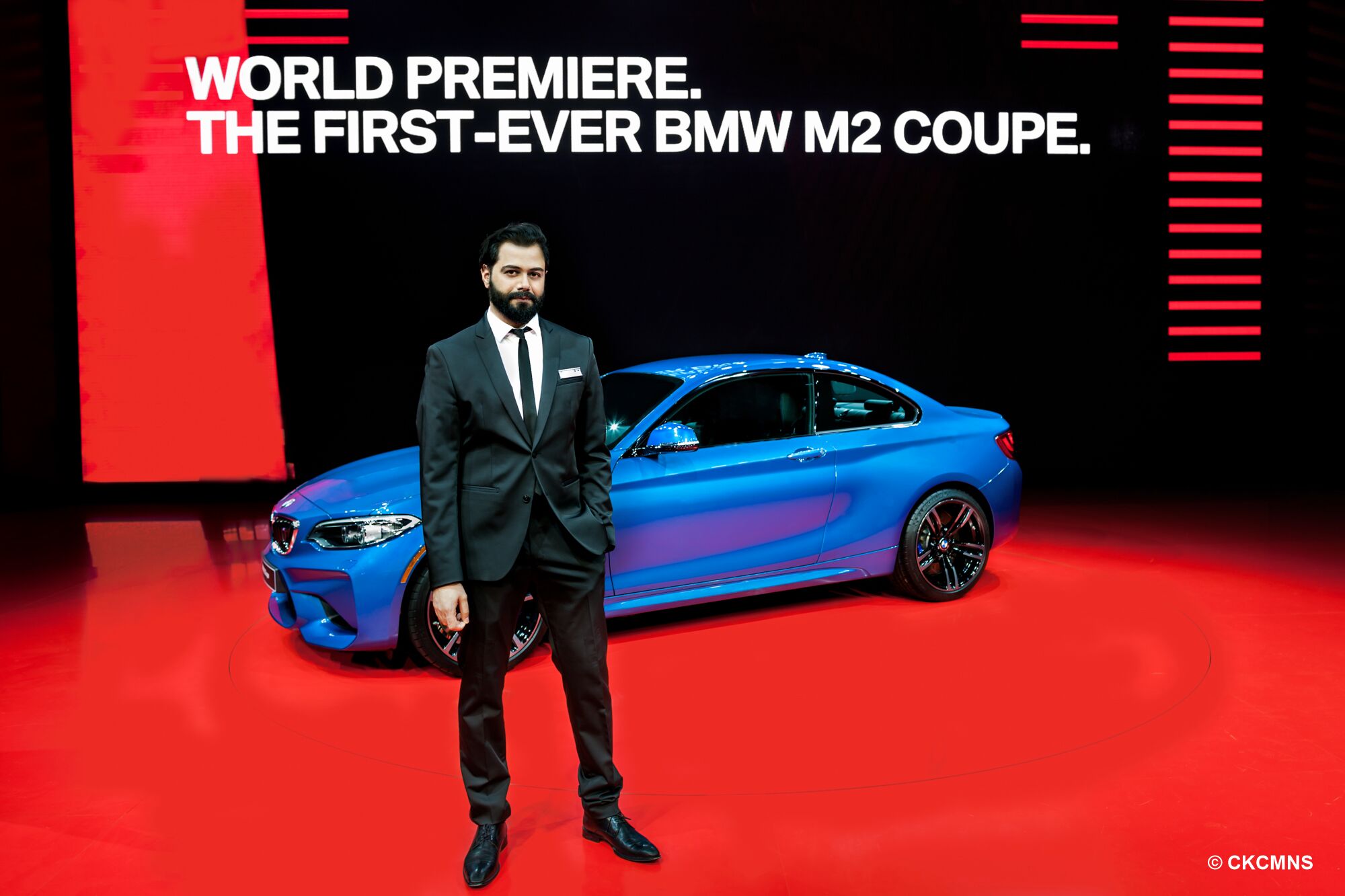 We’re of the opinion, here at BMWBLOG, that the BMW M2 is one of Bavaria’s best looking cars, if not the best looking. It’s sensational, as it look both aggressive and elegant, powerful yet graceful. It’s a brilliant piece of design. We love how wide it looks and is, with those massive fender flares and huge front air dam. It’s just a great looking car.

Though, this was to be expected as the 2 Series is a fantastic looking car to begin with. So the designers of the M2 had a great platform in which to work with. Well, Hussein Al-Attar, the BMW M2’s exterior designer, recently sat down with us, at the 2016 NAIAS, to discuss the M2’s design. 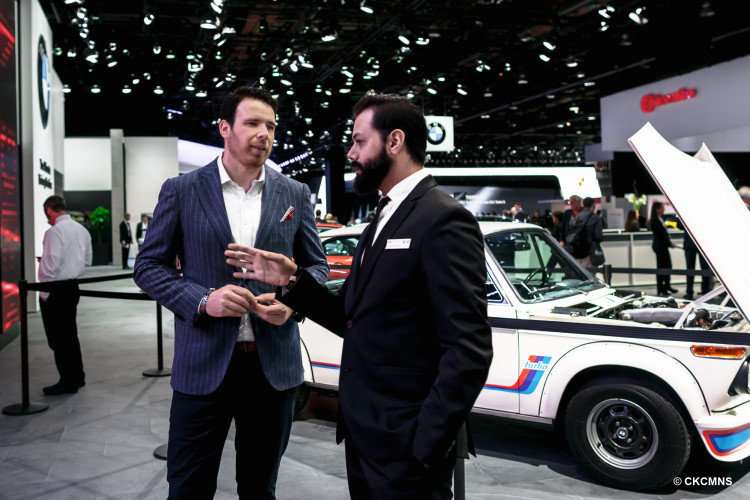 When asked what challenges arose when designing the M2, Al-Attar said that there weren’t any, really. According to Al-Attar, the 2 Series was already such a great looking car with perfectly designed proportions, so it was a great starting place. Working with a car as good looking as the 2 Series seems to be a designers dream, as it allows for great continuation of the creativity that created the car in the first place.

“The proportions [of the M235i] were just…awesome,” Al-Attar said. “When somebody comes along and says we’re going to make it even better, make it 100 mm wider in the rear, and 60 mm wider in the front, you just start sketching and it’s really not hard thing to make a great car.” 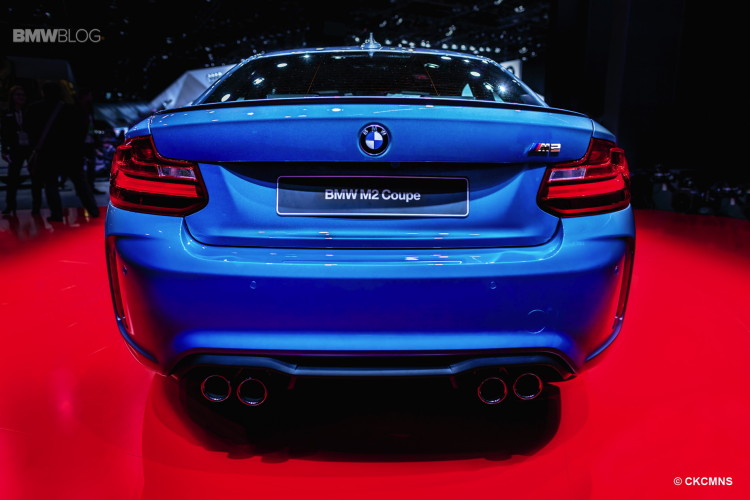 However, there was a distinct desire to make the M2 immediately recognizable as an M Division product. Al-Attar wanted the M2 to be thought of as an M car immediately, but he also didn’t want it to be a carbon copy of the M4. So, for instance, the new front bumper on the M2 is instantly recognizable as an M car but Al-Attar didn’t want to just make it the same as the M4’s. So the front air intake is quite a bit more vertical than the M4’s, to distance it a little bit but also to add some verticality to the front end, as the M2 is so wide.

He also added those vertical rear reflectors to do the same thing.

According to Al-Attar, the M2 is almost comically wide, so he needed to add verticality to break the design up a little bit and make it more well-rounded.

“We have a new front bumper which is easily recognizable as an M car, although if you look closer, there is really nothing similar to what we have on the road right now,” Al-Attar said. “With this car we didn’t go with the width [of the front], but rather with verticality which will make the whole car look more compact.” 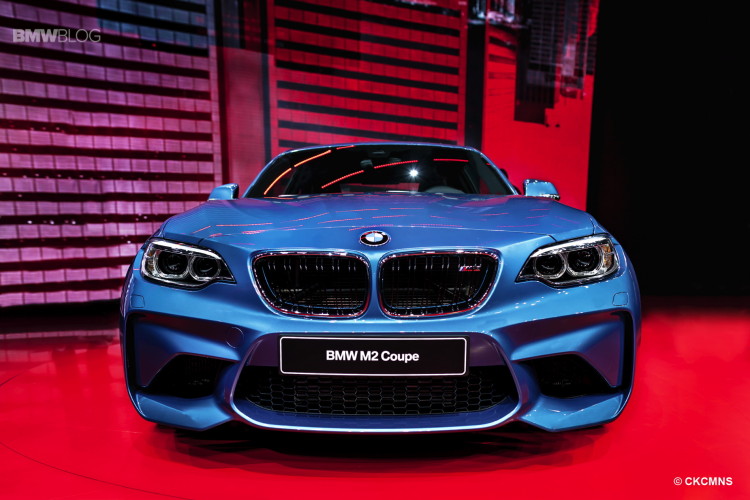 But none of the design cues were done solely for aesthetics. The BMW M2 was designed with functionality every step of the way. So the aerodynamics and styling cues went hand-in-hand when designing the BMW M2.

“It was fun to do this type of car, but it’s also a very sophisticated design, not just experimenting with new aesthetics, we did do that but in a functional aesthetic way,” the M2 designer added. “If you look at these two wings, the fangs that we have in the front, they have an aerodynamic function since they are inclined towards the wheel, the air comes in and is forwarded towards the wheel well and takes the air out.”

We asked Al-Attar about some of the more controversial styling cues of the M2, as well, like the controversial issue with the lack of M mirrors. The M2 mirrors are pulled straight from the M235i while fans wanted the same mirrors from its bigger M brothers.

Al-Attar says that the team noticed during aerodynamics testing that the M mirrors actually fared worse than the M235i’s on the M2. This is likely due to the higher body of the M2 over the M3 or M4. So the M235i mirrors stayed because they offered superior aerodynamics. The other reason for the lack of M mirrors is the need to differentiate between the M2 and the M4.

“What we tried to do with the car is to keep a respectable distance from the M4; the car is very sporty, very fun to drive, but we wanted to keep the distance in positioning the car in the market,” Al-Attar mentioned. 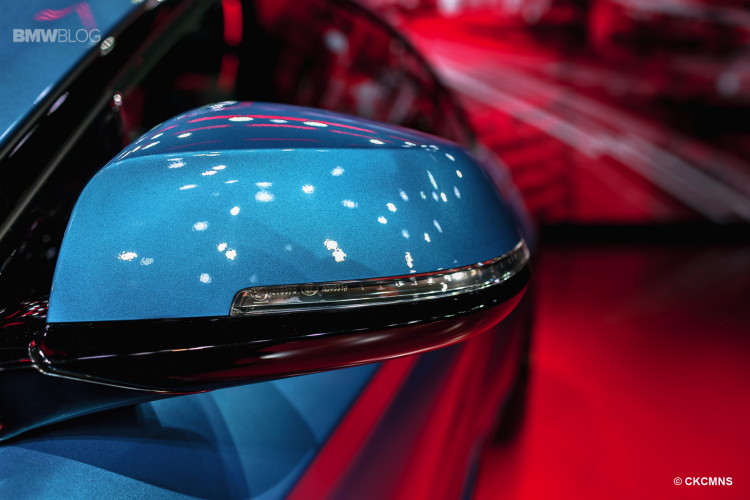 We asked Al-Attar what his favorite color of the M2 is, as we’ve had a lot of fans recently wonder why BMW was only showing it off in Long Beach Blue. Ironically, he said that his favorite color was black. However, he did go on to say that, in sunlight, the Long Beach Blue color looks the best, as it’s a very saturated blue color that really shows off all of the shapes and lines and it makes the M2’s design seem more three-dimensional.

We also asked if the Mineral Grey color would be a good color for that as well, as Silverstone Metallic is considered the color to best show off the M4’s lines, and he said that it is but the Long Island Blue is the best for truly showing off its design. I guess that’s why BMW keeps showing it off. 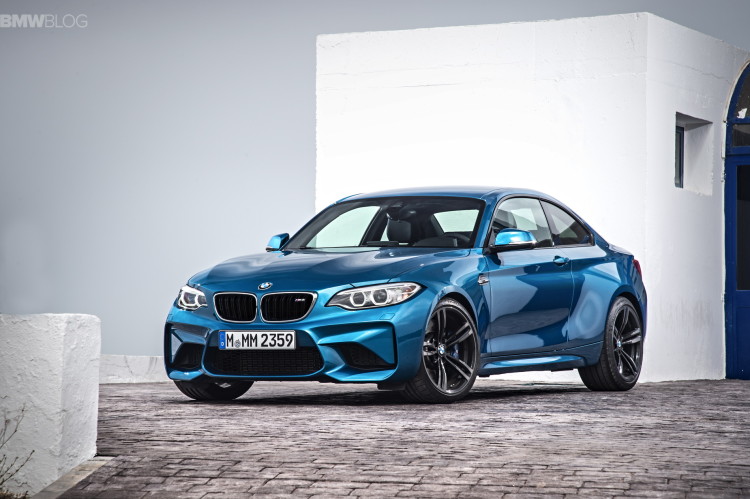 “If you see the car in sunlight, it has a very rich, saturated blue and then you have the dark, also saturated blue, it’s this very sudden change between the light and dark blue which makes the car look tri-dimensional  and very sculpted,” Al-Attar told us.

We also talked about the target customer for the M2 and who it will be. According to Al-Attar, it’s typically people who already have, or would like to, own a BMW 1 Series M. The target customer is basically the same, as it’s a car for people who want something compact and sporty but also livable everyday. It’s also targeted for people who actually plan on tracking their car, not just showing off.

“I guess people like you who have a 1M,” Al-Attar said referencing our 1M. “It’s gonna be people who also take the car on the race track since the M2 is suitable for the track, or people that are a fans of a sporty, compact cars, but also looking for daily usability.” 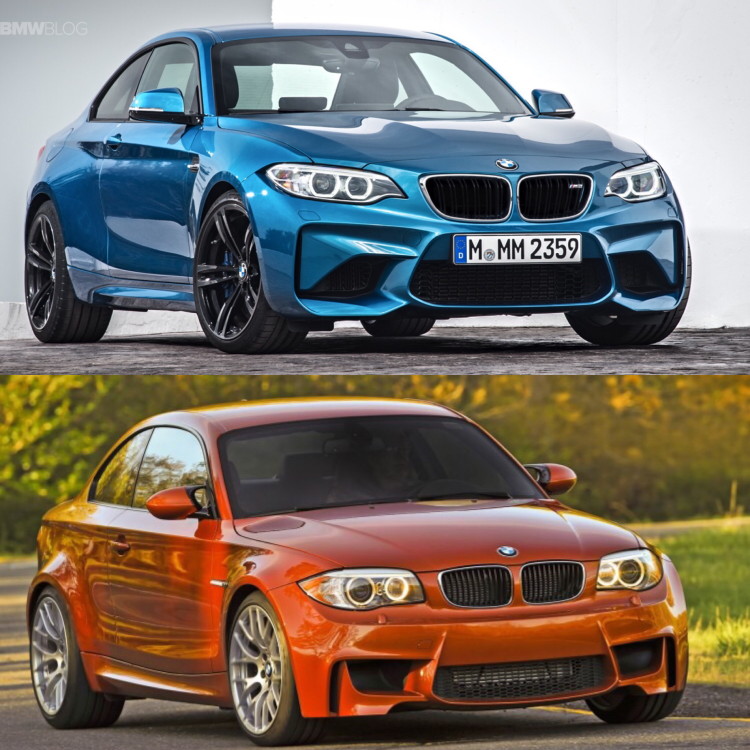 The BMW M2 represents a massive step for BMW, as it adds a completely new car to the M stable and one that fans have been dying for. So, obviously, designing such a car can be a difficult challenge. We asked Al-Attar if it was easier to design this car having had the BMW M235i as a platform in which to work on, or if it would have been easier to start from scratch. As a designer, Al-Attar would always like to start from scratch, with a blank sheet of paper, as it allows much more freedom to design and it also allows for easier fixing of mistakes. However, having a design as good as the 2 Series’ to start with was actually quite easy, as the car was already so perfectly proportioned, according to Al-Attar.

Being that he started with such a great design, Al-Attar didn’t have to go through many different designs before finding the right one. He started his inspiration with the BMW 2002 race car, as it had those low aerodynamics that were closed, as it didn’t require as much air intake. So he wanted to create a similar style, but obviously with much more airflow through the front. So he ended up with the massive front air intakes, but with a front bumper that is visually very low and wide, much like the original 2002’s.

“In my case – with this car – I had a perfectly clear idea from the beginning,” Al-Attar told us. “I started basically with the 2002 Turbo and all the other variations it had.”

One of the bigger design themes in the automotive world lately is the headlights. Cars must have cool looking headlights nowadays and, especially with LEDs coming into play, customers demand flashy (pardon the pun) headlights and taillights. To design these, Al-Attar worked very closely with the detail designers, people who design things such as headlights, mirrors and wheels. He allowed them quite a lot of freedom and if they needed him to redesign something to make the headlights or taillights as good looking as possible, he’d consider anything he could change, because those details are so important to the overall design of a car and equally as important as any other aspect of design. 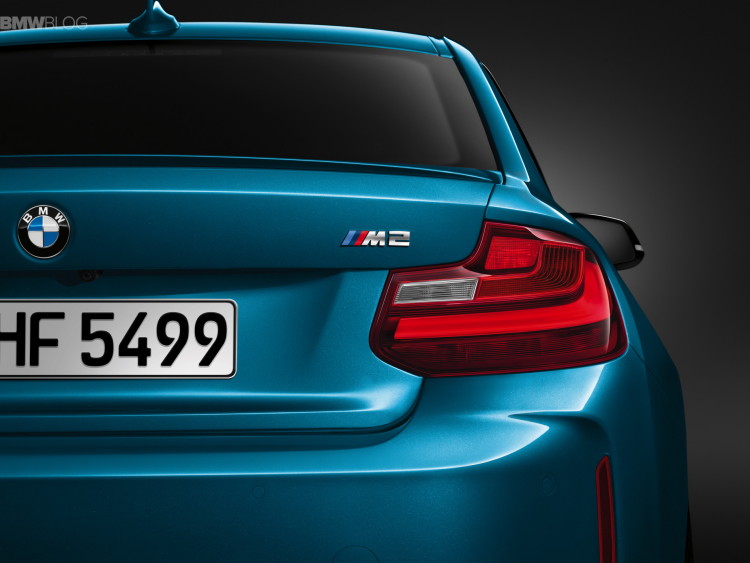 “It’s a very complicated and we have teams dedicated to that [designing lights],” Al-Attar explains. “The Detail Design Team works on the lights, wheels, engine covers for example, so of course we have to work with them very closely. For me, cause I have this background, cause I did this project before, I try to respect their vision – cause they have a vision of what the lights should look like. It’s always a give or take, if they tell me that they need a little more space or change the outline, and most of the time it works with the design, then I try to accommodate that. Our details designers are doing a tremendous job showing the technology we have.” 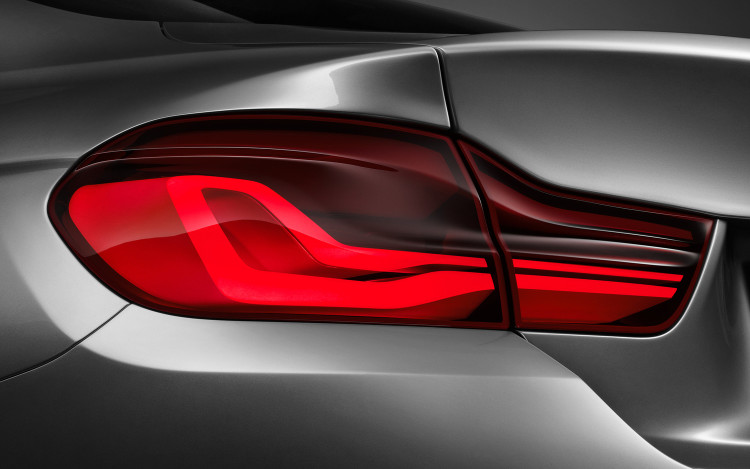 Finally, we ask the BMW M2 designer what his favorite BMW design of all time is, aside from the M2 of course, and his choice was the BMW i8. According to Al-Attar, it has so many channels that go through the body and its awesome doors make it seem like a space ship and he said that it was a “designer’s dream.”