Shopping for a luxury car can be a time-consuming process since you typically have to choose between a wide array of colors, options, trim levels, and other extras. As we’ve seen in recent videos, the BMW 3 Series is a prime example of a premium vehicle available with an assortment of customizations. One desirable spec in our opinion is this 330i xDrive finished in Brooklyn Grey and equipped with the M Sport Package.

Riding on 19-inch alloy wheels with blue M Sport brake calipers, the sports sedan has the optional Shadowline Package that blacks out certain parts of the body, including the kidney grille and trunk lid spoiler. BMW’s Life Cycle Impulse for the 3er has brought redesigned bumpers but the sharper headlights represent the most significant design update over the pre-LCI model.

The interior is a bit more special by featuring a Tacora Red upholstery, albeit it’s the Sensatec synthetic leather rather than the real Vernasca leather. Automakers are beginning to understand glossy black trim looks good only in official images since in reality, it’s a fingerprint nightmare. BMW is offering what it’s known as Aluminum Rhombicle Anthracite that still looks posh without being as prone to scratches and smudges as piano black. 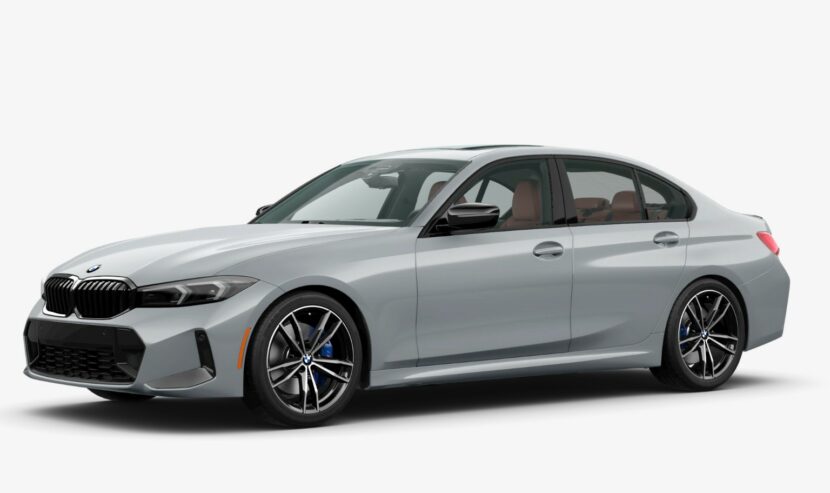 With the 2023MY, by far the biggest change the 3 Series has received is the iDrive 8 with dual screens housed within a single piece of slightly curved glass. The driver’s display has a familiar 12.3-inch diagonal whereas the infotainment now stretches at 14.9 inches. Slimmer central air vents had to be installed to make room for the enlarged display, which now incorporates the climate controls for better or for worse.

To further declutter the center console, the old automatic gear lever is gone as BMW has installed a tiny selector. To its right sits the iDrive’s rotary controller, which the German luxury brand has decided to drop with the latest X1 and 2 Series Active Tourer that have an even simpler interior layout.

An LCI was needed now that Mercedes has launched the new C-Class while Audi is putting the finishing touches on the next-generation A4. BMW is believed to be preparing a second round of tweaks for the 3 Series in mid-2024 and have the G20 in production until early 2027 when a new CLAR-based model is expected.