2023 BMW M340i Portimao Blue Is A Stunner In Walkaround Video

More and more dealers across the United States have the 2023 3 Series Sedan and BMW of Mountain View is now showcasing the M340i. The more expensive xDrive version, this sports sedan in LCI flavor has quite a few boxes ticked on the options list, including the lovely Portimao Blue Metallic paint and the 19-inch wheels with a two-tone finish.

As with most 3 Series LCI videos, this M Performance model has the Shadowline upgrade with an assortment of black accents, including a dark kidney grille. It also has adaptive LED headlights with cornering lights as well as the 50 years of M anniversary badges on the outside. More expensive extras include the $1,700 Driver Assistance Professional Package and the $1,350 Premium Package, while that black Vernasca leather upholstery is another $1,700.

Interestingly, the car has been configured with the electric trunk lid deleted (-$100) and boasts additional goodies like the dashboard wrapped in synthetic leather. Other notable upgrades are the adaptive M suspension for $550 and the Harman Kardon sound system for $875. Taking into consideration the $995 destination charge and a few miscellaneous items, this 2023 BMW M340i xDrive retails for $67,370. 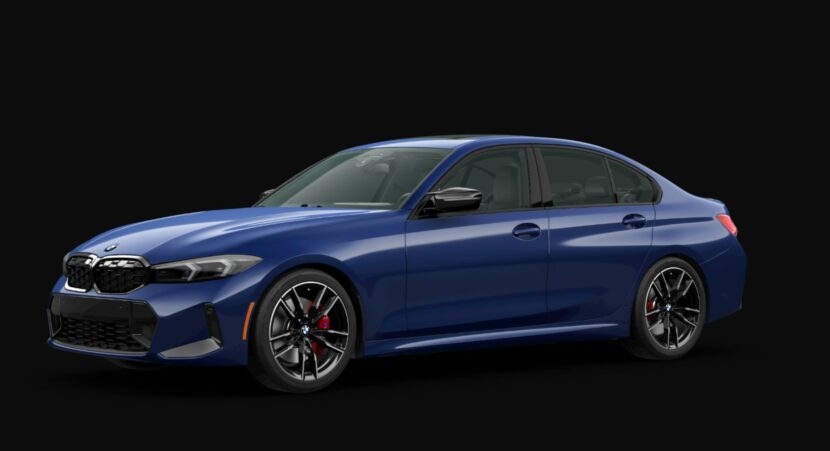 It has to be one of the most desirable builds we’ve seen since the facelifted 3 Series debuted earlier this year, at least outside of the M3 realm. The customer who ordered the car certainly had good taste and we’re particularly fond of how the red brake calipers look against the blue body. You’ll also notice the M-esque side mirror caps in black and more glossy dark accents in the back for the diffuser and trunk lid spoiler.

The iDrive8 remains a controversial feature depending on whether you like screens atop the dashboard or not. There’s no denying the tech it uses is great, but some would’ve hoped for a more seamless integration like cars with the previous-generation infotainment have.

Overall, the 3 Series G20 remains a desirable luxury car and it is believed BMW has extended the model’s life cycle until early 2027. Additional updates will be implemented before the seventh-gen 3er is going to be retired, with reports stating tweaks are to be applied in mid-2024.