With the official unveiling of the 7 Series G70 earlier this year, BMW put a big emphasis on the two-tone paints it will offer for its flagship sedan. These fancy finishes are available through the Individual catalog and cost a steep €12,000 at home in Germany. If you think that’s way too much money to pay for only a paint job, this purely electric i7 keeps it simple by featuring the most affordable finish once we exclude the standard non-metallic Alpine White.

Aventurine Red Metallic is €1,150 in Deutschland where several other metallic shades cost the same money. This i7 xDrive60 has eschewed the standard 19-inch wheels in favor of an optional 20-inch set with a two-tone finish and an intricate spoke design with an “X” theme. Contrasting the red paint is a black roof, which can also be combined with a dark grille as opposed to this car’s chrome kidneys. With this being the EV version, the rear bumper has a clean design with no cutouts for the exhaust tips. 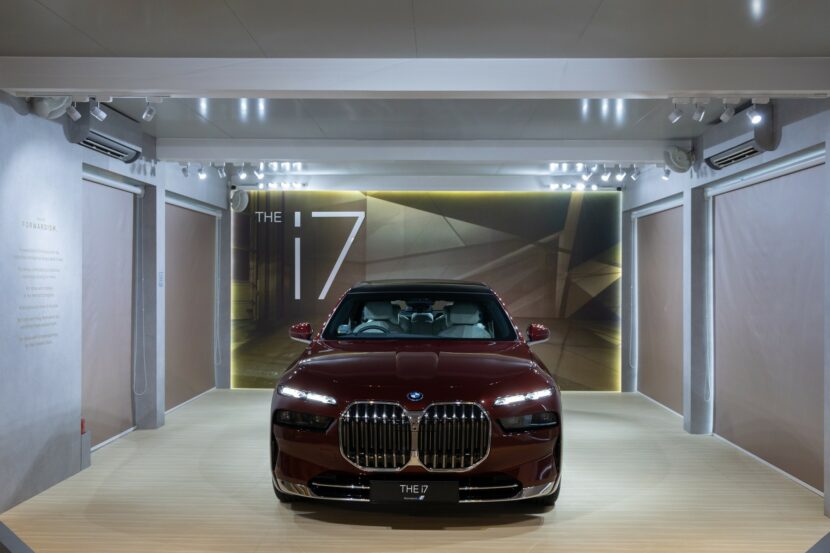 The seventh 7 marks the end of two wheelbases since BMW offers its range-topping car in just one size. It’s bigger than the old G12 7 Series for even greater legroom for rear passengers. Automatic doors akin to a Rolls-Royce make their debut on a 7er and this particular car has the white Merino leather upholstery. It’s not a fully loaded i7 since the electric luxobarge is missing the 31.3-inch Theatre Screen serving as the rear-seat entertainment system.

While the rear is typically a limo’s party piece, the front is just as interesting thanks to the futuristic dashboard featuring a minimalist design. The concept car-like dash incorporates the iDrive 8 with dual screens, along with intricate ambient lighting part of the Interaction Bar and barely any conventional controls. It’s a vast departure from the previous-gen 7 Series, which had separate buttons and knobs for a lot of the functions.

The xDrive60 will be the sole i7 flavor available at first, but BMW has already announced an M70 will follow later in 2023 with as much as 660 horsepower. Production of the 7 Series and i7 in Dingolfing commenced back in July and the global market launch is set for November.