How the water injection system works in the BMW M4 GTS 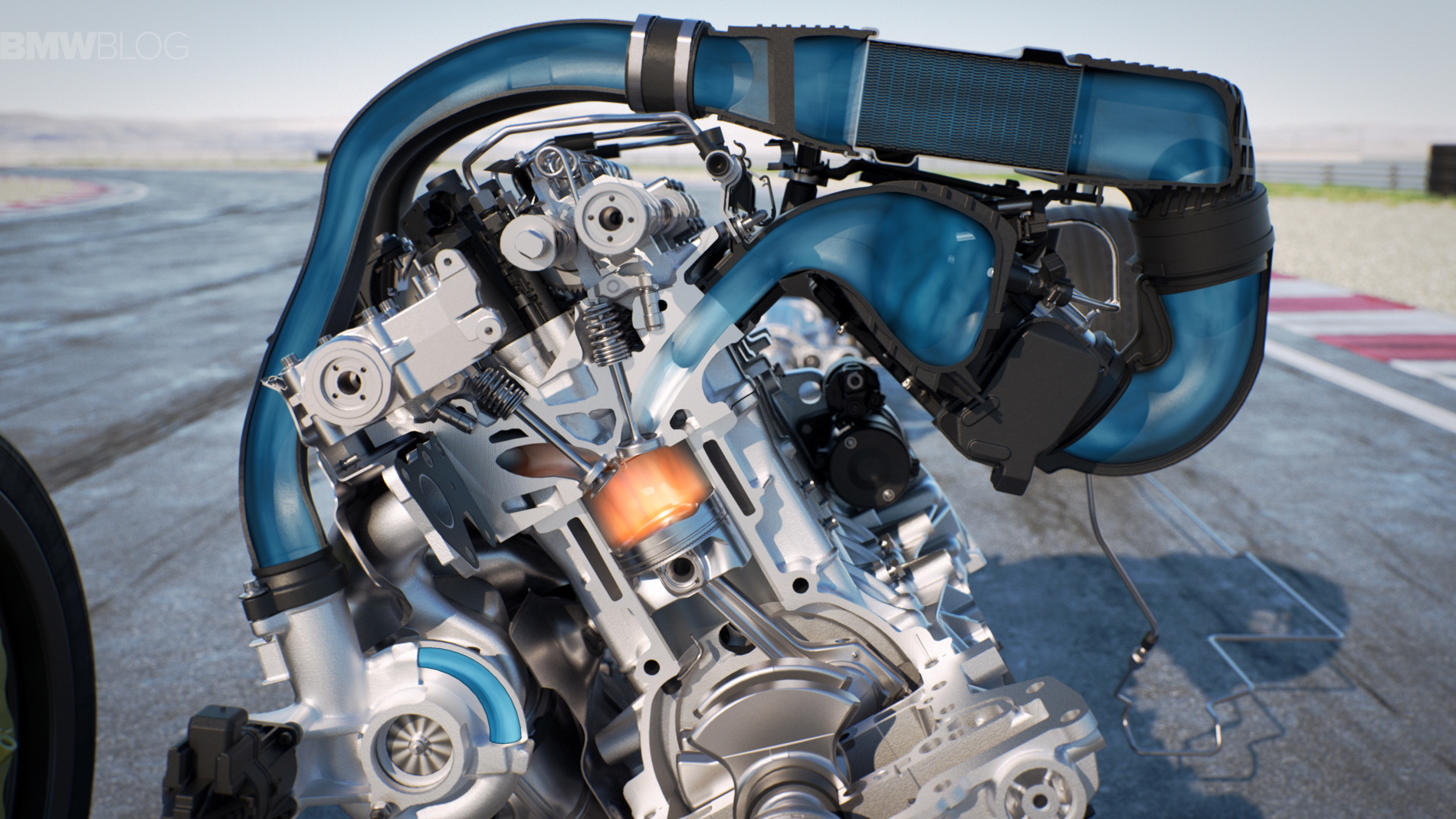 The BMW M4 GTS is an incredible automobile! Not merely quick, but legitimately fast and the S55 is just that much more aggressive in the GTS than the ‘normal’ M4. Part of this is down to the use of high pressure water injection into the intake manifold under high load and RPM. It allows the boost to be turned up to eleven (from 17.2 psi to 21.6 psi – an approximate 26% increase in max boost pressure).

Benefits of Water Injection (or, No Knock – Knock) 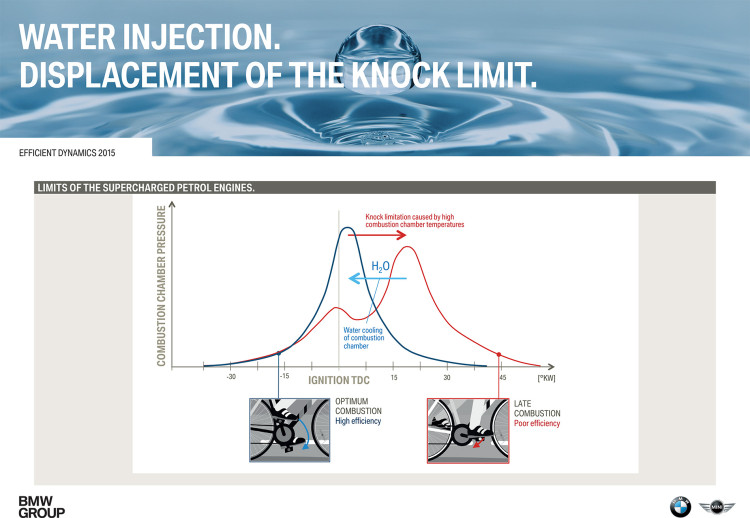 But why inject water? Water isn’t compressible (it is – however, not by an automobile engine). The key to understanding why water is good it is useful to know what happens inside a cylinder during ignition of the air/fuel mixture. Ideally air and fuel are combined inside the cylinder during the intake (downward) stroke. The air/fuel ratio in a gasoline engine should, under ideal conditions be 14.7 parts air to one part fuel known as ‘stoichiometric’. As load and RPM build, the mixture should get richer, more fuel to air than stoichiometric. And the reason it gets richer is to help prevent ‘knock’.

So what’s ‘knock’? Knock is the uncontrolled/unwanted ignition of the air/fuel mixture before the proper time. In normal conditions the spark plug electrode will receive a high voltage charge timed to occur slightly before the piston reaches top dead center (TDC) in the compression stroke (upward piston movement).

How Does It Work? 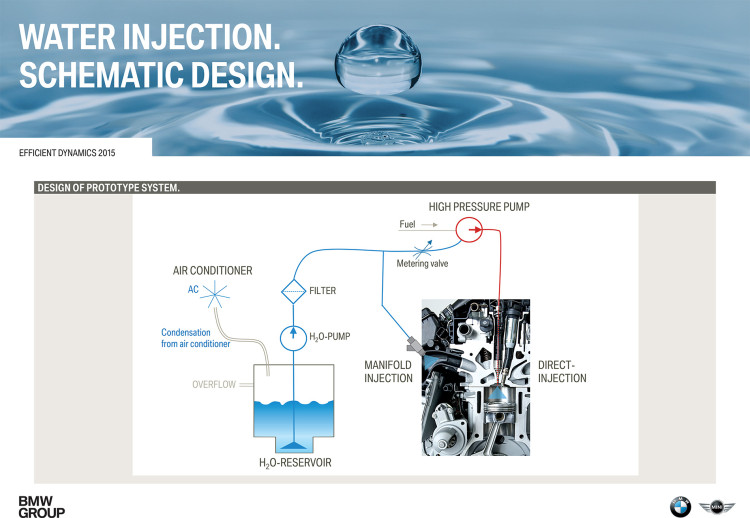 If all goes according to plan, the electrical ‘spark’ between the electrode and ground causes ignition of the air/fuel mixture. Done correctly the ignition allows the fuel air mixture to create ‘flame fronts’ that consume the fuel. The gasses produced by burning the air fuel mixture expand and press the piston downward – the power stroke (after the piston has reached TDC).

When things don’t go according to plan, the pressure (and temperature) of the combustion chamber allow the air/fuel mixture to ignite uncontrollably. This can occur before the air fuel mixture should ignite, or in opposition to the planned ignition flame front, in which case the components (read bearings) of the cylinder are subjected to significantly harmful stresses.

It also means that less work is being performed and subsequently efficiency is degraded. These outside of normal events occur when pressures and temperatures go beyond the systems capability of effectively controlling them. Compression ratio, charge temperature, and the octane rating of the fuel used are contributing factors.

And as RPMs build up the need to advance ignition timing goes up (spark has to occur much sooner before TDC) and the required octane rating of the fuel goes up. All of this complicates proper ignition of the air/fuel mixture and then when you add turbo/super charging of the combustion mixture – you’re truly poking the beast.

In the early 1930s Harry Ricardo looked at how to control ‘knock’ in a supercharged combustion chamber. In Hugh MacInnes’ book, “Turbochargers”, (H. P. Books – © 1978), Ricardo’s investigations are shown to determine the upper boundary of richening the mixture (adding additional fuel) beyond which knock was certain to occur. However, injecting a fine mist of water was found to absorb heat and allow higher pressures in the combustion chamber. Hence water injection’s usefulness. (And water/methanol injection was used in variants of BMW’s 801 radial aircraft engine during World War II.) 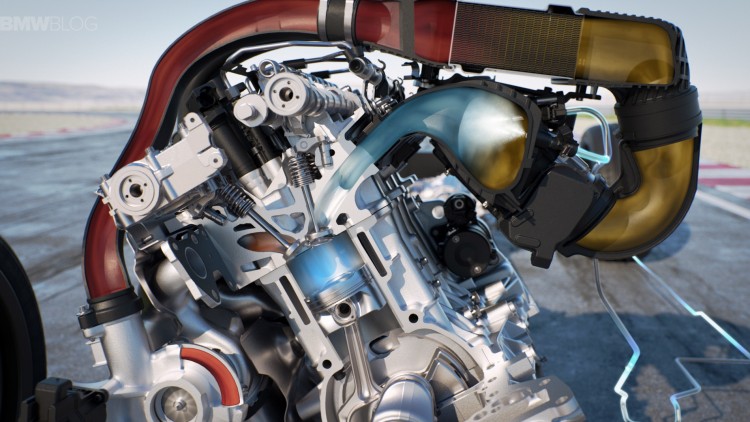 There is a measurement of engine efficiency called Brake Mean Effective Pressure or BMEP (pronounced BEE- mep), that is an indicator of how efficient an engine is. It’s one thing to produce powerful engines, but something very much better if the engine is powerful AND efficient.

BMEP is calculated by multiplying engine torque times a constant, 150.8 for four stroke engines (which represents a torque output of 1 lb-ft per cubic inch), which is then divided by the engine displacement in cubic inches. Of course this formula can be expressed using metric equivalents. 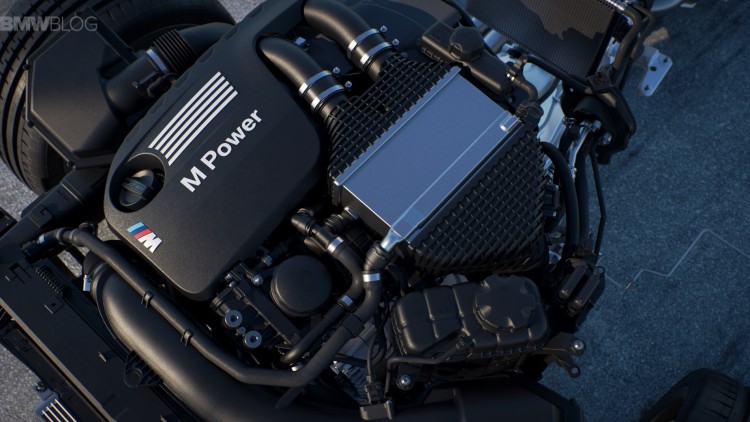 The M4 GTS’ S55 has a 33% greater BMEP than the N55 – by increasing total boost over the normal N55 and S55. Hence the need for water injection on the M4 GTS. These are all seriously powerful and efficient engines, but especially the S55 used in the M4 GTS. (And, for reference the GM LT1 is no slouch either – for an NA engine the LT1’s BMEP is quite good.)

BMW has added three water injection sites on the intake manifold and a tank in the rear of the car that has to be filled in order to utilize the car’s full potential. In addition to prevent problems, the car is not allowed to develop maximum boost when the outdoor temperature falls below 41 degrees Fahrenheit. In addition the pump for the water injection is reversible in order to fully drain the lines to the injectors after use.

While water injection (and water/methanol injection) had been used in the tuner aftermarket for decades, it was nice to see the engineers at BMW provide a truly professional use of this old hot rodder’s trick.