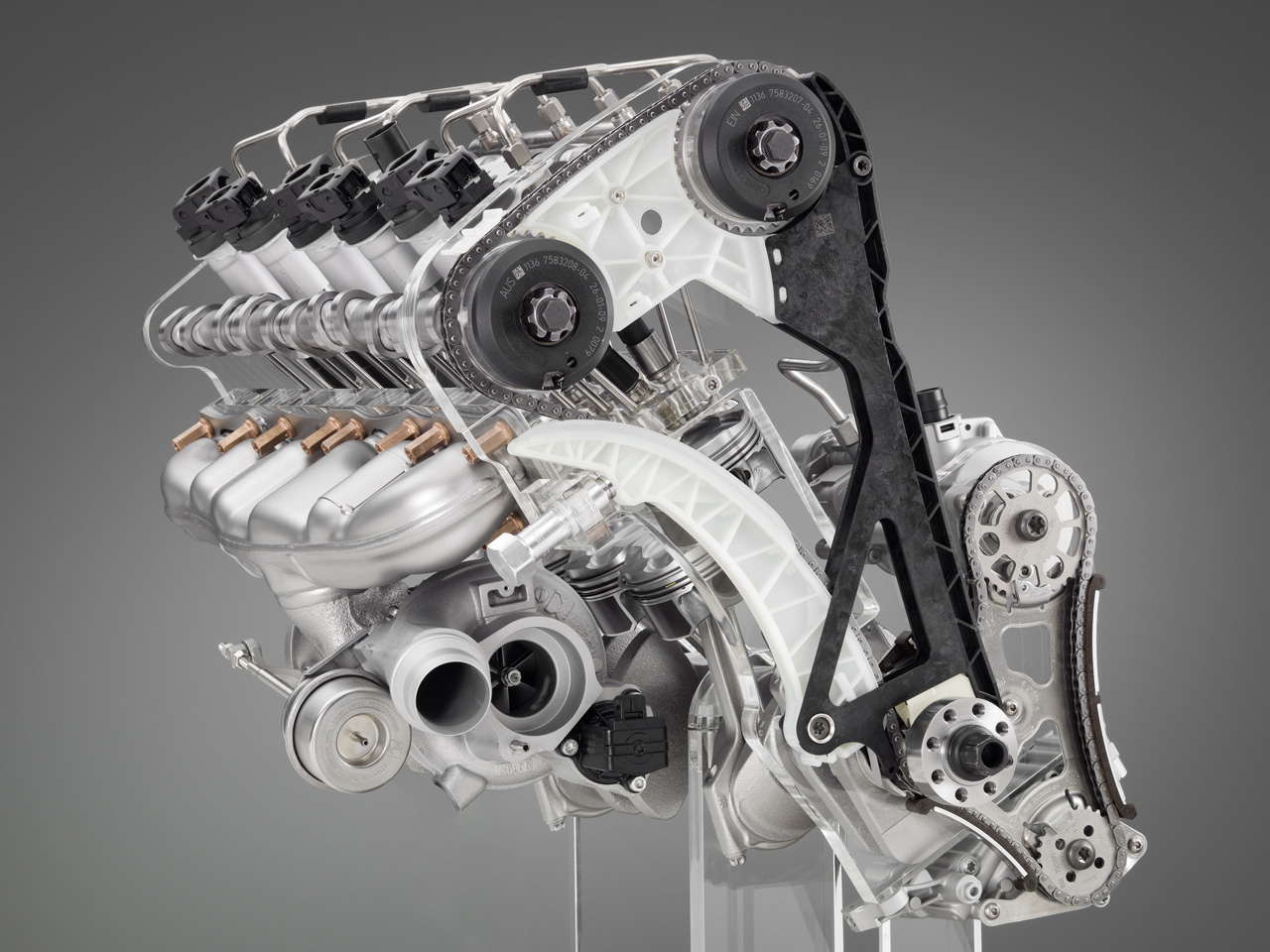 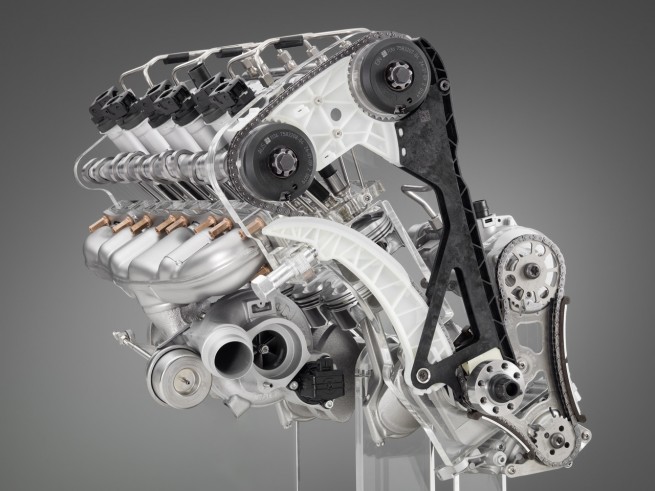 The BMW N55B30 represents the current workable technical edge of gasoline engine performance and economy. It is a state-of-the-art powerplant available in the 535i GT and soon the 535i from BMW. It is possible, that before long the N55B30 will supplant the N54B30 in BMW’s entire lineup.

To gain a better understanding of the technical advances contained in this engine, it is necessary to develop a simple example of a gasoline Otto cycle engine. This will be used to help explain the benefits of the technology contained in the N55B30.

Consider, for example, a simple stationary engine. It is designed to run at peak torque. The engine must start and then quickly hit its optimum RPM. The air/fuel mixture is restricted for starting (for which the amount of fuel to air is increased). This will ‘light’ the engine off and, once started, the restriction or ‘choke’ can be removed. From here, the throttle is moved to provide operation at the optimum RPM. There isn’t much more to it than that. In addition, the valve timing is optimized for the single RPM requirements of the engine. 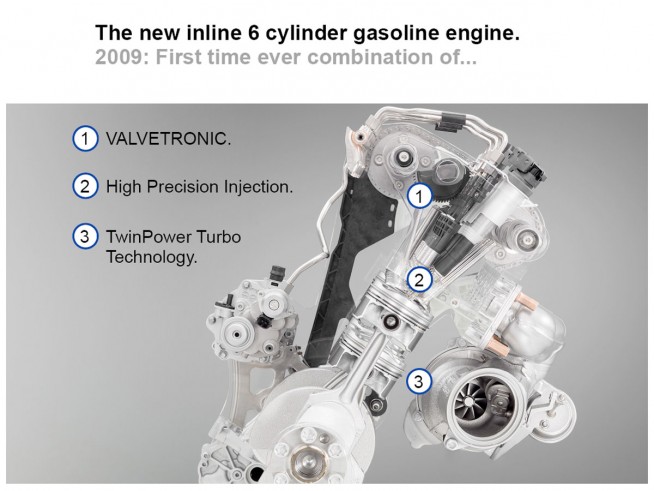 Now, depending on the method with which the air/fuel mixture is introduced to the engine, the performance and emissions characteristics of the engine will vary significantly or slightly. It is most apt to vary significantly if a carburetor is used to supply the air/fuel mixture. That is due to the inherent variability of the mixture arriving in the combustion chamber. The carburetor does not optimize each and every air/fuel pulse, it simply hopes for a happy medium.

Carburetors work on the Bernoulli principle. They draw air past a venturi and the vacuum created draws fuel from a hollow needle (jet) creating an air/fuel mix. The amount of air/fuel mixture allowed to flow to the engine is controlled by a throttle plate. The carburetor, inherently, does not provide optimum fuel economy and emissions control.

A mechanical fuel injector is better than a carburetor in that the fuel will be metered relatively precisely.

Fuel injection utilizes a nozzle that can be opened and closed to inject pressurized fuel into the air stream. However, some early mechanical fuel injection, as used in the old sprinters and Indy cars, was often described as a controlled leak. Electronic fuel injection, however, delivers more precision over the air/fuel mixture.

In the history of gasoline engines, electronically controlled port fuel injection was a key enabler of emissions compliant performance engines.

Now, an engine optimized for a single RPM has it uses, as a lawn mower for example, but it is useless for an automobile. (Even hybrids that use an IC motor for an electrical generator allow for some variation of engine RPM).

The engine has to perform perfectly over a range of RPMs sufficient to meet any potential driving condition. One approach to this is to vary the intake and exhaust valve openings in relation to the combustion process so that they are optimized over a range of engine RPMs. BMW accomplishes this with its double-VANOS technology. 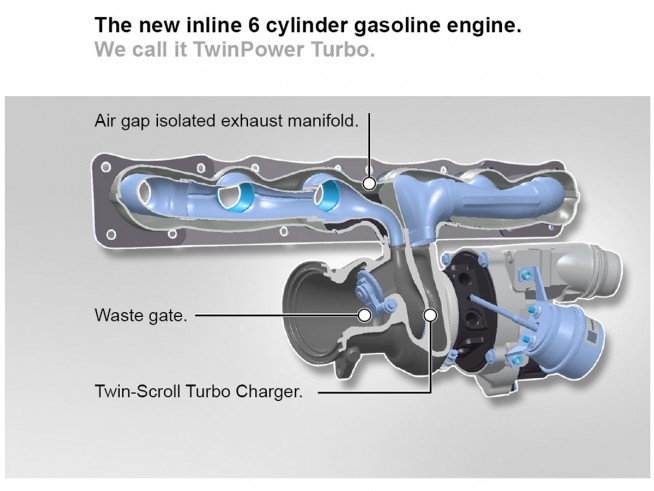 VANOS changes the relative position of the cam lobe in relation to the combustion cycle based on engine load and RPM. It can smooth out the power band of an engine, making an engine feel less ‘peaky’, for example.

Variable lift of the intake valves can alter the use of a throttle in the engine. When a throttle is used to vary the volume of the intake charge allowed into the cylinder, the engine has to work against the throttle during partial throttle opening. This results in lost work, known as pumping losses. Imagine the work required to pull a sheet of paper away from the nozzle of a vacuum cleaner. That, in a very simplistic way, is what pumping losses are.

Varying the lift of the intake valve can change the volume of charge allowed into the combustion chamber, this can require less work than the tugging against a closed throttle. Of course that depends on the amount of work needed to provide the variable lift mechanism. The variable lift mechanism has to return power at a rate better than the potential pumping losses to be effective. What variable valve lift buys is increased fuel economy.

BMW uses Valvetronic to provide variable lift to the intake valves of an engine. It utilizes an intermediary between the rocker arm and cam lobe whose shape is designed to change the total lift of the valve depending on its position in relation to the rocker arm and cam lobe. This allows for a variable lift profile, within a specific range, unlike the original VTEC which is a simpler (yet effectively clever) solution.

So with double-VANOS, Valvetronic and port fuel injection we have the foundation technology for the N52B30 engine familiar to NA BMW owners as the x28i models.

But let’s take that basic suite of engine technology, enhance the performance and miniaturization of the Valvetronic components and add direct injection and forced induction like the N54B30 and you have a recipe for real success.

Direct injection works well in an engine that allows significant variations in valve timing and forced induction. Since it must deliver fuel directly into the combustion chamber, it subsequently utilizes higher fuel pressures than port injection to overcome the pressure of the compressed air charge in the cylinder. It is a key enabler in the new round of emissions compliance and fuel economy requirements that would otherwise inhibit engine performance.

Coupled with Valvetronic and VANOS, direct injection and the twin scroll turbocharger, BMW provides the same performance across a wider RPM range for less fuel consumption in the N55B30 than the preceding N54B30. Quite an accomplishment. 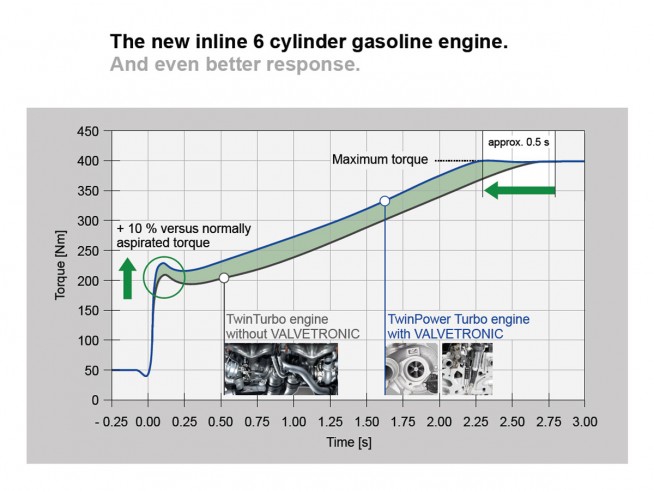