One of the reasons the 3 Series has always been a successful product has to do with the numerous versions BMW is offering. That’s especially true today when the long-awaited M3 Touring has finally joined the lineup to take on the Audi RS4 Avant. Those who prefer the more practical body style combined with a fuel-efficient powertrain can get the LCI model as the 330e, with or without xDrive.

This 2023 3 Series Touring plug-in hybrid presented by a BMW dealer in the UK is finished in the optional Brooklyn Grey Metallic paint, which represents a novelty that comes along with the facelifted model. It’s a high-spec version of the luxury family hauler, featuring the M Sport Pro Pack with adaptive LED headlights as denoted by the blue accents. It also gets several glossy black accents – including the kidney grille – and red brake calipers for a contrasting effect.

As with all of the company’s plug-in hybrid and purely electric vehicles, the 330e gets the BMW roundels with a blue contour. You’ll notice the newer “electrified by i” badge on the front fender to further denote the powertrain’s eco-friendly nature. It also boasts an electrically operated tailgate and power-folding tow bar for those who plan to haul boats and whatnot. 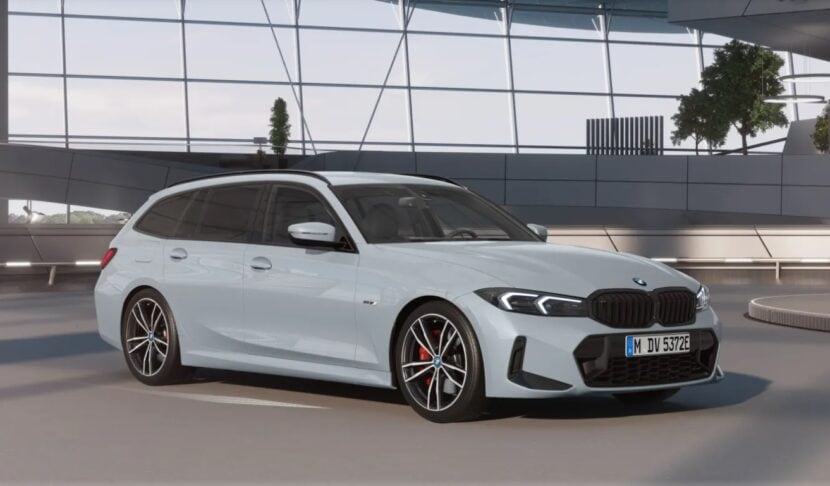 Stepping inside, the black Vernasca leather upholstery has white stitching while the seatbelts wear the M colors as part of the M Sport Pro Pack to class up the interior. Being the LCI model, the center console has been simplified by integrating the climate controls into the touchscreen. In addition, the bulky gear lever is a thing of the past, replaced by a much smaller selector that takes up less space.

The iDrive 8 is hands down the most notable change brought by the Life Cycle Impulse as it dramatically changes the interior. Some will prefer the old setup with the integrated center screen and instrument cluster while others will appreciate the curved glass housing for the two displays positioned atop the dashboard. The side-by-side screen setup has been applied to all 3er models for 2023, including the M3 Sedan to echo its Touring sibling.

Overall, the LCI has both big and small changes in a bid to remain fresh and competitive against the new Mercedes C-Class.