For good reason, most videos showcasing the X7 LCI have focused on the new-for-2023 M60i version with its S68 engine. As more and more dealers are beginning to receive the facelifted luxobarge, we’re being given the opportunity to see the base model – the xDrive40i. Mind you, this example is not the most affordable version of the fullsize SUV since it’s the M Sport. It costs an extra $2,900 over the base Luxury model in the United States.

The Tanzanite Blue II Metallic will set you back an additional $1,950 while the 22-inch alloy wheels finished in Jet Black and wrapped around mixed run-flat tires will further increase the final bill by $1,300. Parkview BMW from Canada happens to have this X7 xDrive40i with its blacked-out large kidney grille flanked by the controversial split headlights introduced with the Life Cycle Impulse. 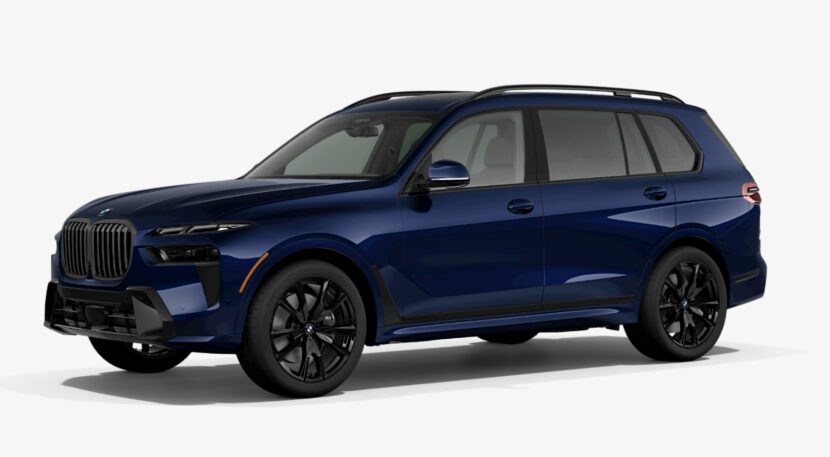 It’s a six-seat version since it has the optional $850 second-row captain’s chairs inside the posh cabin with black Sensafin leather and wood trim on the dashboard. Aside from the love/hate headlights, the other major change for 2023MY is represented by the iDrive 8 with the side-by-side screens. The one on the right has a 14.9-inch diagonal and has swallowed what used to be the physical buttons for the climate settings.

As with other recent BMWs – including the 3 Series LCI – the X7 gets the company’s much smaller gear selector to replace the bulky old lever. With the center screen now being bigger than before, the center air vents have been slimmed down to make room for the enlarged display. Another update – albeit less important – is the illuminated ambient light bar on the passenger side of the dashboard. It says “X7” on the regular model and “M” if you step up to the M60i.

Overall, the X7 has gone through both big and small changes for its mid-cycle update. There’s still no full-fat M model, but the ALPINA XB7 is still around and has already been facelifted as well.