More and more 3 Series LCI cars are arriving at dealers across the world and some of them appear to have a soft spot for the M Performance model. Calgary BMW from Canada recently received the M340i xDrive with an interesting spec by combining a Skyscraper Grey exterior with Tacora Red Vernasca leather upholstery.

Being an M Performance car manufactured in 2022, it also gets the anniversary Motorsport emblem, but it’s actually a 300 CAD option in Canada. Those 19-inch wheels with a two-tone look and double-spoke design suit the sports sedan quite nicely and feature a discreet M logo while the red brake calipers behind them provide a striking visual contrast.

Like most 3 Series LCI builds we’ve seen, this one too has an assortment of glossy dark accents courtesy of the Shadowline exterior trim. This M340i has a blacked-out kidney grille and trunk lid spoiler, while the diffuser and exhaust finishers also come with a dark look. With the facelift, the M340i also gets redesigned mirrors that might make some people think it’s a full-fat M3. 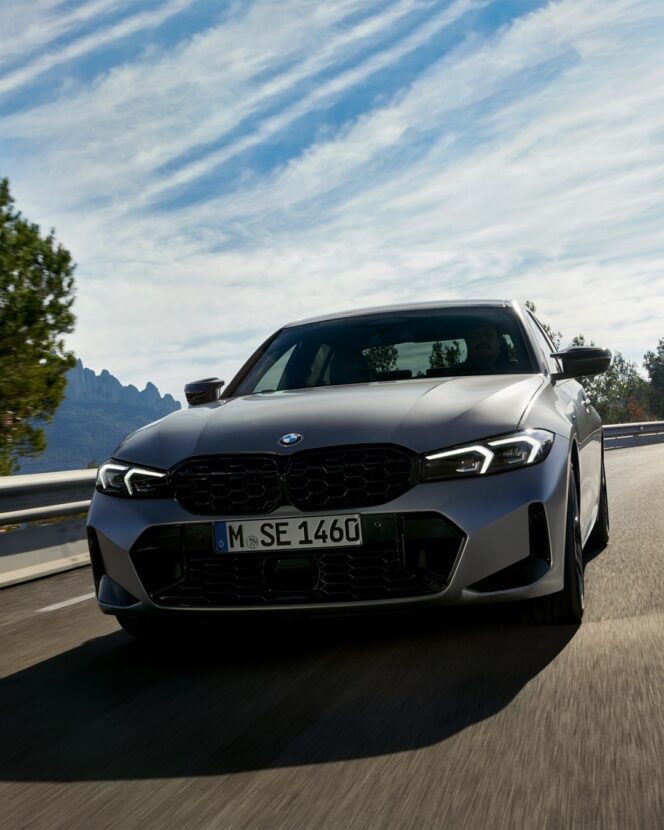 Although this car has a sunroof, the M Performance LCI can now be had with an optional carbon fiber roof that was previously reserved for the M3. However, it’s only available if you stick with the sedan as the wagon doesn’t get it, not even the new M3 Touring. Save for the sharper headlights and redesigned front bumper, the exterior is more of the same, but the dashboard has been significantly modified to accommodate the latest infotainment where the 14.9-inch touchscreen incorporates the climate controls.

In addition, the central air vents are slimmer than before and the gear lever for the automatic transmission has made way for a smaller selector to declutter the lower section of the center console. The fully digital instrument cluster measuring 12.3 inches comes as standard and is mounted within the same piece of glass as the large touchscreen.

Much like in the United States, the 3 Series LCI is a gasoline- and sedan-only affair in Canada, but Europeans can combine the wagon body style with a diesel engine and the M Performance treatment by opting for the M340d Touring.