BMW is celebrating half a century of M at the Goodwood Festival of Speed with the first-ever M3 Touring. Several builds are being showcased in West Sussex, including this car driven up the hill by none other than The Duke of Richmond himself. He wasn’t all alone as M boss Frank Van Meel rode shotgun in the speedy wagon during what you can see was a typically British day.

We’ll be the first to admit the G81 featured here doesn’t sound great. There could be a few reasons for that. Firstly, we’re dealing with an M3 Touring built to comply with EU regulations, meaning that it has a gasoline particulate filter (GPF). Since series production hasn’t started, we’re dealing with a late prototype that might not have the final tuning. Of course, the weak soundtrack might be simply due to a bad microphone. 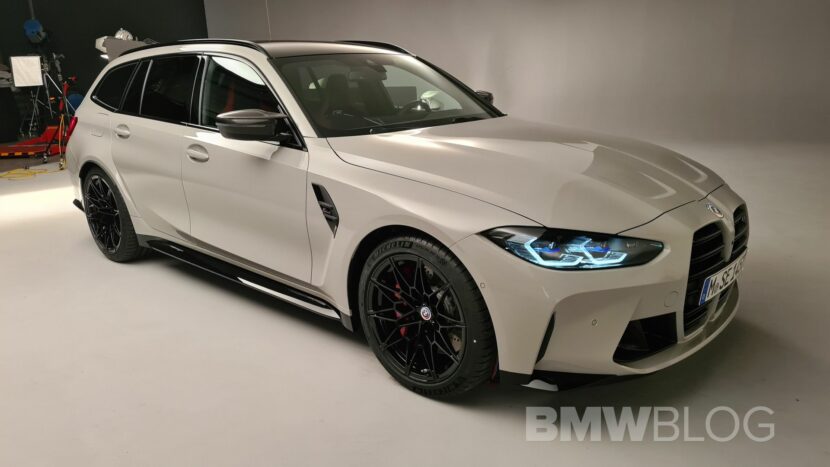 Regardless, this is our first opportunity to see the M3 Touring in action, finally devoid of any camouflage. With standard xDrive, the wet surface wasn’t a problem for BMW M’s belated answer to the Mercedes-AMG C63 Estate. The car in question wears a new color dubbed “Chalk” that looks an awful lot like what Porsche is offering for the 911. You’re not stuck with those all-black wheels since BMW is also offering a two-tone look and a different spoke design, with all having the same 19-inch front and 20-inch rear size.

Speaking of customizing the M3 Touring, the vehicle’s online visualizer is up and running on the BMW Deutschland website. It shows 16 body colors and the same number of interior themes, along with five ways to spec the dashboard trim. Of course, there are many ways to drive up the car’s price, with one of the most substantial being the optional ceramic brakes.

Decades in the making, the BMW M3 Touring is ideal for a one-car garage and a viable alternative to an X3 M Competition. It offers the exact same practicality of a regular 3 Series Touring, but with the added performance that comes with a full-fat M car.