BMW has created a miniseries on its YouTube channel where it provides video tours of its latest models. In recent days, we’ve seen the German luxury marque go through the changes the 3 Series and X7 have received with the Life Cycle Impulse, along with the radical new 7 Series G70 and its electric i7 equivalent. In the newest episode, we are given the opportunity to take a closer look at a much more exciting model – the M4 CSL.

Shown here in the Frozen Brooklyn Grey Metallic paint as in all official images and the showcar from Concorso d’Eleganza Villa d’Este, the range-topping 4er flaunts its carbon fiber aerodynamic package. Along with the rear seat delete and some other tweaks, the M4 CSL has lost a whopping 100 kilograms. Interestingly, the US press release quotes a weight loss of 240 pounds, which is actually a bit more than that, at 109 kilograms. 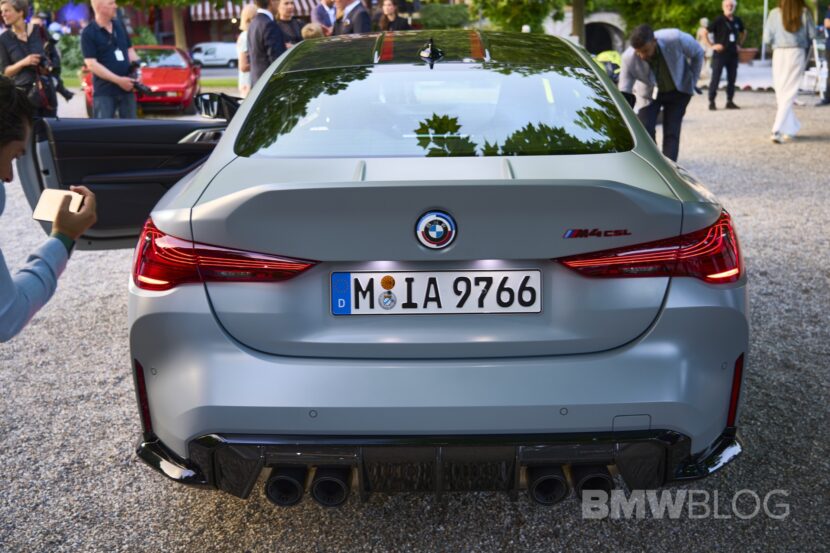 Needless to say, the ducktail spoiler à la M3 E46 CSL is mentioned in the video tour, as are the exclusive 19-inch front and 20-inch wheels with a matte black finish and Michelin Pilot Cup 2 R tires. BMW has also developed new LED taillights that use laser tech for the first time, thus representing a departure from the old M4 GTS and its swanky OLED rear lights. At the front, yellow accents in the headlights harken back to the race cars of yesteryear.

Shown here are the full carbon bucket seats while the rear bench has been replaced by a storage net holding two helmets. To further shave off weight, the center console is made entirely out of carbon fiber, which has also been used for the shift paddles and on the spokes of the Alcantara-wrapped steering wheel.

We should mention the red contour of the exterior badging won’t be exclusive to the M4 CSL as BMW will be using this theme going forward for more potent products. New additions to the M range will have a black badge, with the iX M60 leading the way. The traditional tri-color logo will continue on existing models.