Who is more qualified to talk about the 2023 3 Series if not BMW itself? A new official video provides a 12-minute tour of the facelifted sedan and the changes it has gone through with the LCI. The sedan shown here is a 330i with the optional M Sport Package and the newly added Brooklyn Grey body paint. The German luxury brand touts a “significantly more muscular and distinctive” kidney grille, with a glossy black inside with a chrome frame and double slats.

As with all versions of the updated 3er, the sports sedan gets slimmer headlights with sharper LED daytime running lights looking like an upside down “L.” The car shown here has optional adaptive headlights with laser tech. Much like its crossover alter ego, the X3, the 3 Series has lost its separate fog lights as these have been integrated into the main headlights. The front fascia now has a hexagonal air intake flanked by air curtains we’ve already seen on the facelifted X3.

Moving on to the sides, the 330i M Sport rides on 19-inch wheels with a two-tone finish and M branding. At the back, the taillights have remained essentially the same, but the bumper incorporates a meaner diffuser and a large glossy black area with vertical reflectors in the same vein as the M3. 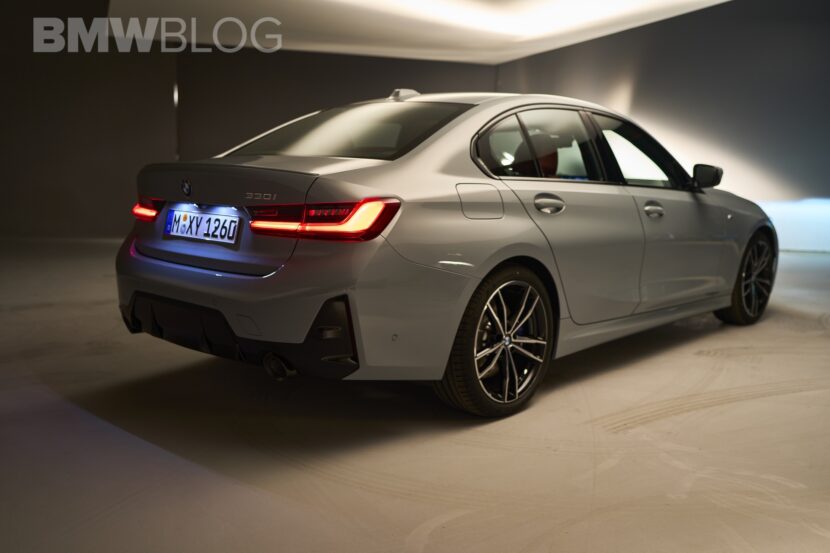 More significant changes have occurred inside where the dashboard has been reconfigured to accommodate BMW’s latest infotainment system. The fully digital 12.3-inch instrument cluster is joined by a 14.9-inch touchscreen running on iDrive 8. For better or worse, the main display incorporates most of the functions, including those for climate settings. This radical change has allowed the company to simplify the dashboard.

In addition, the center console has been tweaked to eliminate the fairly large gear lever in favor of a much smaller rocker switch. Going forward, all versions of the 3 Series come with an automatic transmission, save for the base M3 still offering a clutch pedal to appeal to enthusiasts. The car featured by BMW has sports seats with perforated Sensatec upholstery.

The video ends by showing the 330e Touring with its slightly smaller cargo capacity (410 to 1,420 liters vs 500 to 1,510 liters) due to the added hardware commanded by the plug-in hybrid setup. We also get to see the hotter M340i for those who are after six-cylinder power without going all out for the M3.