With the holiday season upon us, BMW is kicking off the celebrations with a new clip dubbed “Christmas Film” featuring quite a few celebrities. Two-time Academy Award-winner Christoph Waltz is the protagonist and we see him arriving at the company’s headquarters in what appears to be a lovely 3.0 CS (E9) coupe.

Upon entering the BMW Tower building in Munich to meet CEO Oliver Zipse, the 65-year-old actor is surprised to hear from the receptionist that he will be meeting the head honcho at the ongoing Christmas party. Playing a veritable cat-and-mouse game, he then tries to escape by running away from the staff member wearing Santa Claus’ hat.

That’s easier said than done since getting out of the building shaped like a four-cylinder engine proves to be a real challenge. While attempting to flee, Christoph Waltz runs into other important people starring alongside in The BMW Christmas Film. He’s joined on camera by Kai Langer, head of design at BMW i, along with fashion designer Alexa Chung and YouTube sensation Supercar Blondie (Alex Hirschi). 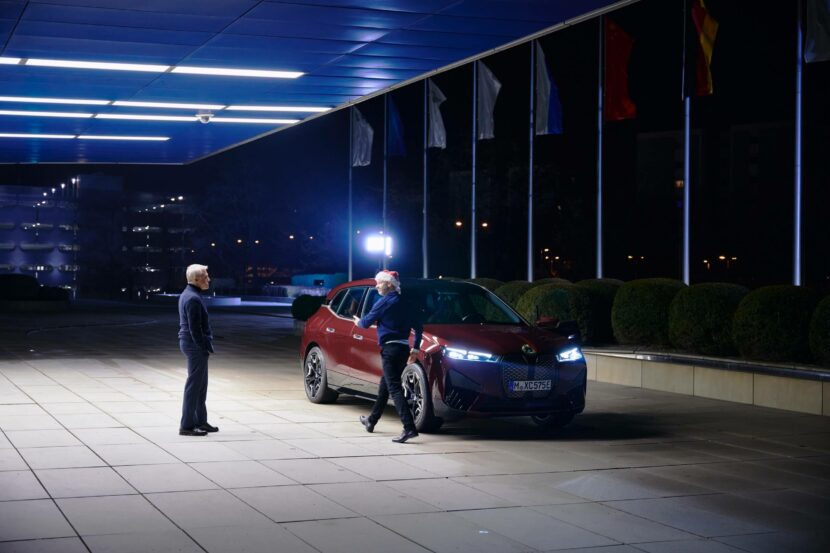 After hiding next to a gorgeous 507 Roadster to get away from the man with the Christmas hat, he continues his run and eventually enters another room, only to discover that’s where the party was being held. BMW head honcho Oliver Zipse greets him and learns from the actor who starred in Quentin Tarantino’s Inglourious Basterds and Django Unchained that parties are not his cup of tea.

All’s well that ends well as Christoph Waltz “escapes” the Christmas party in an appropriately colored BMW iX electric SUV finished in Aventurine Red and driven by none other than the employee from whom he was trying to escape.

It should be mentioned this is not the first time when the Vienna-born actor collaborates with BMW as he took part in the #NEXTGen 2020 event during which the iX was presented in production guise.