Having ruled out full-fat M versions of front-wheel-drive-based cars, BMW is not interested in leveling up the M135i xDrive to take on the likes of the Mercedes-AMG A45 S and the new Audi RS3. However, those interested in a hotter compact hatchback from Bavaria can rest assured the aftermarket scene is hard at work unlocking more power from the B48 engine shared with the equivalent M235i Gran Coupe.

Case in point, this M135i from the F40 generation has been granted a stage 1 kit complemented by an Akrapovic exhaust system providing a much meaner soundtrack for the turbocharged four-pot. Speaking of which, the 2.0-liter mill now pushes out 352 horsepower and 533 Newton-meters of torque, representing a healthy boost of 46 hp and 83 Nm over the standard powertrain.

To put those numbers to the test, YouTuber AutoTopNL took the modded 1 Series M Performance to an unrestricted portion of the glorious Autobahn in Germany. The amped-up hatch managed to complete the 0 to 62 mph (100 km/h) sprint in just 4.2 seconds, representing a decrease of six-tenths of a second compared to the standard M135i xDrive. Flat out, it almost reached a GPS-verified top speed of 153 mph (247 km/h), though the digital speedometer was showing 160 mph (258 km/h) 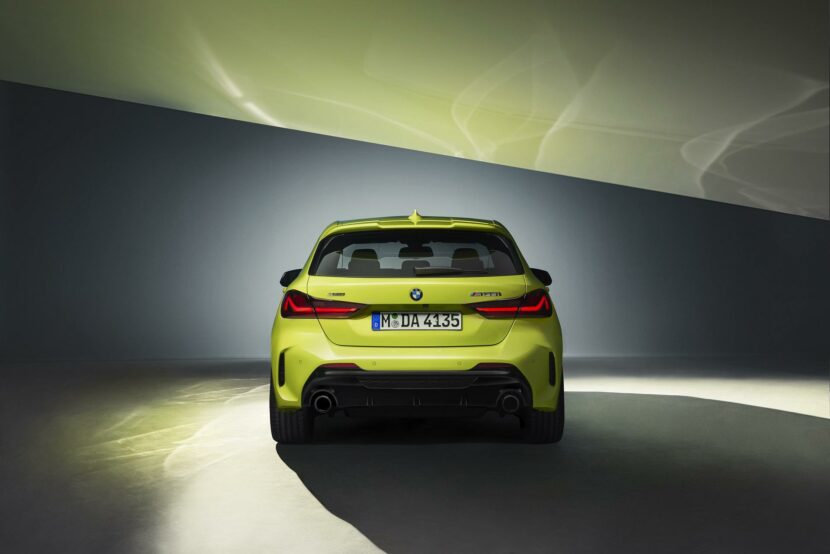 As impressive as the latest range-topping 1 Series might be, it’s still a bit disappointing the old inline-six engine is gone. The fact BMW has demoted the 1er to a front-wheel-drive platform is still a tough pill to swallow by enthusiasts since the old, tail-happy M140i felt more special than all of its FWD-based competitors. Losing two cylinders has allowed the Audi RS3 to take the crown as far as having the biggest engine in its segment by retaining the inline-five 2.5-liter unit.

As you may recall, BMW recently updated the M135i courtesy of several mechanical revisions, but they’re not related to the engine. Instead, the feisty hatch has an optimized suspension with retuned springs and dampers, plus some minor changes to the chassis. Fresh paint choices have been added, although this Misano Blue shade remains among our favorites.