The BMW M2 Competition is a fun car to hoon around a race track straight from the factory, but this owner wanted to take his sports coupe to a whole new level. It makes the hotter M2 CS seem restrained by comparison, and we’d argue not even a hypothetical CSL version of the F87 wouldn’t be this extreme.

It’s a stripped-down car with just two seats and not much else on the inside, other than a roll cage behind the body-hugging Recaro seats along with a custom CAE shifter for the manual gearbox. When a car has just straps instead of conventional handles on the carbon fiber door cards, you know the owner took the diet to the extreme. Oh, and the side glass has been replaced with polycarbonate like on an actual race car.

Speaking of carbon fiber, the M2 Competition uses the lightweight and durable material for the GTS-style hood, front splitter, rear diffuser, and also for the trunk lid. In addition, the roof is also made out of carbon fiber to reduce the center of gravity, and even the footplates are on the same list. The video’s description on YouTube provides full details about the mods applied to the track-ready machine, including BBS wheels and more air intakes than we can count. 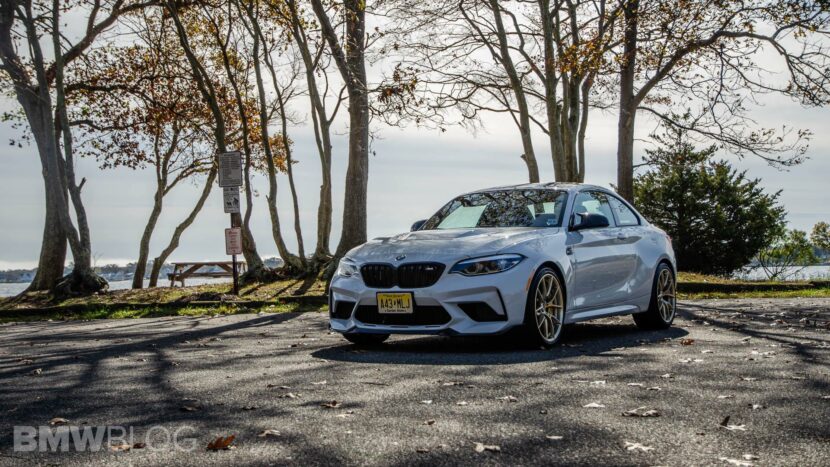 It wouldn’t be a complete build without some changes under the hood where the S55 twin-turbo engine has been massaged to deliver 510 horsepower. Extracting a little over 100 hp from the 3.0-liter unit was done courtesy of a stage 2 remap from Litchfield and by deleting the gasoline particulate filter. The M2 Competition also boasts an Akrapovic exhaust, not to mention a Drexler limited-slip differential and a custom intake.

The transmission has been modified for better acceleration by shortening the final drive at the expense of fuel economy and top speed, which are less important on a circuit such as the Silverstone GP featured here. From the suspension and brakes to the tires and steering wheel, basically, everything has been changed. That includes the original black finish as the car is now painted in khaki green to make it even more of an eye-grabber.

It has shaved off roughly 200 kilograms (441 pounds) compared to a standard M2 Competition, and corroborated with the extra power and upgrades in virtually all other areas, let’s just say that it goes like stink around a track.