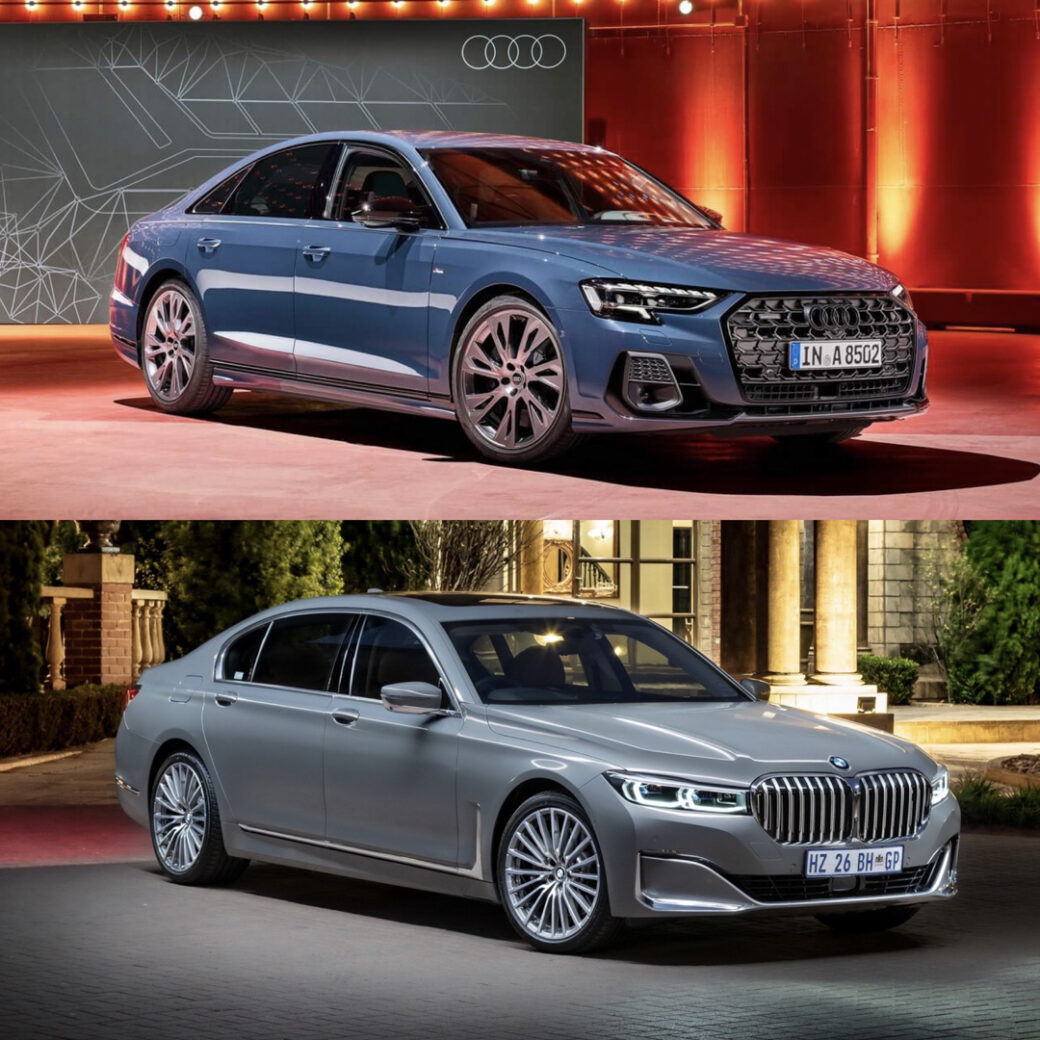 Audi just recently updated its flagship luxury sedan, the A8. With that new facelift came a new, blingy grille, sharper headlights, and some new color choices. However, it’s still mostly the same as before. So is it new enough to take on some of its competition, such as the BMW 7 Series? Let’s take a look.

Up front, the new Audi A8 replaced its old grille insert — a bunch of horizontal slats — with a blingier honeycomb insert. It absolutely looks better than before and gives the A8 a necessary style boost. It’s actually surprising just how much of a difference it makes. Conversely, it’s also shocking to see how much of a difference the 7 Series’ grille makes, in a negative way. The 7 Series’ headlights are nice, its front air intakes are cool, and its hood features nice creases but its grille is just… not great. So the Audi A8 wins up front for sure. 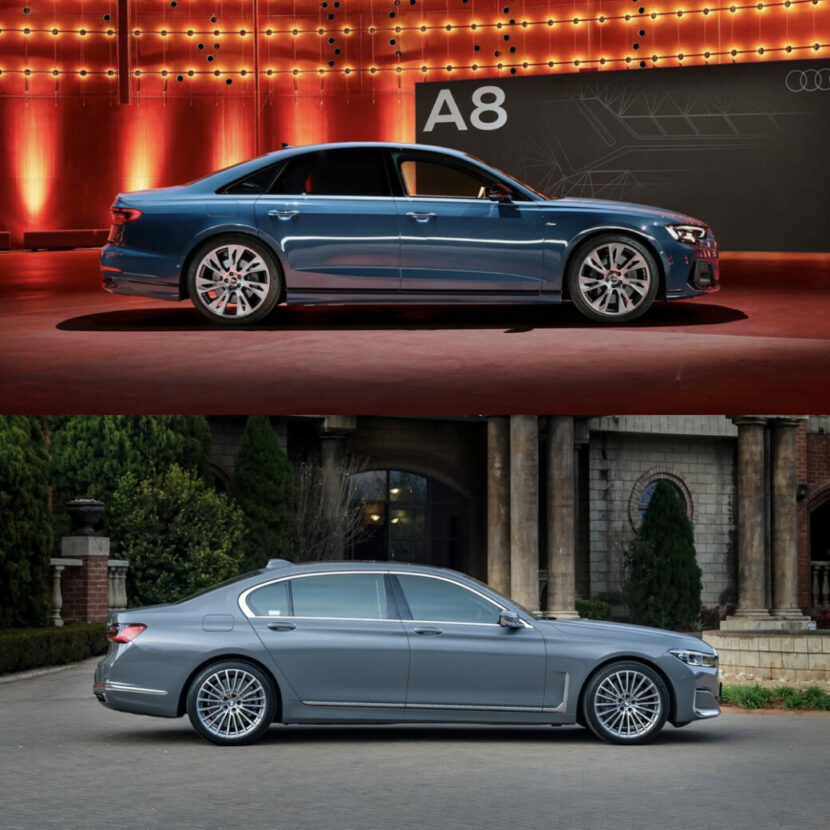 In profile, the Audi A8 is sleek, simple, and clean. It’s not trying to be overly sporty or stylish (although its wheels are a bit flashy), nor does it have much muscularity. While the 7 Series is a bit chunkier, a bit more muscular, and it features a massive piece of trim that looks a bit like a hockey stick. This is where preference comes in, as fans of more aggressive styling will like the 7 Series more and fans of simpler styling will prefer the A8.

Out back, the Audi A8’s rear taillight bar features some slick LED lighting elements that do little dances and give the car some real pizazz. While the 7 Series has a light bar, too, it features fewer tricks than the A8’s. However, the 7 Series wins back some points for having real exhausts, while the A8’s are fake, something we have a hard time forgiving. So it’s a wash out back. 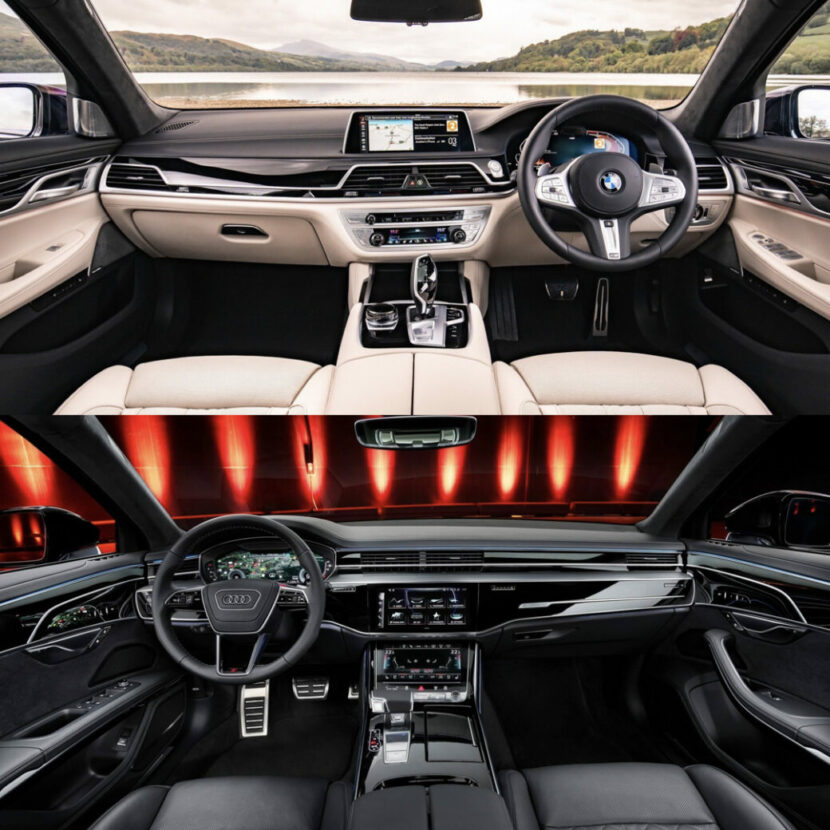 Inside, things get a bit more difficult. Personally, I find the Audi A8’s interior to be handsome. However, there are many enthusiasts that prefer the more driver-focused cabin of the 7 Series and its greater use of physical controls. Also, in my opinion, the BMW’s iDrive 7 is more intuitive and easier to use than Audi’s touchscreen MMI system. The Audi A8 fights back, though, with a new style of a digital gauge cluster. The Virtual Cockpit certainly looks fresher than the the older style of BMW’s Live Cockpit Professional.

Last time I compared both cars, I far preferred the Audi A8. It’s not that the 7 Series is bad, it’s just a bit odd looking and lacks some of the luxury you’d expect from such an expensive car. Of course, the Audi A8 is now the newer car, so naturally it will be one step ahead of the 7 Series which is ready to be retired in 2022. As always in those comparisons, it’s all about timing and the rankings can change from year-to-year.

What’s your favorite of the two? 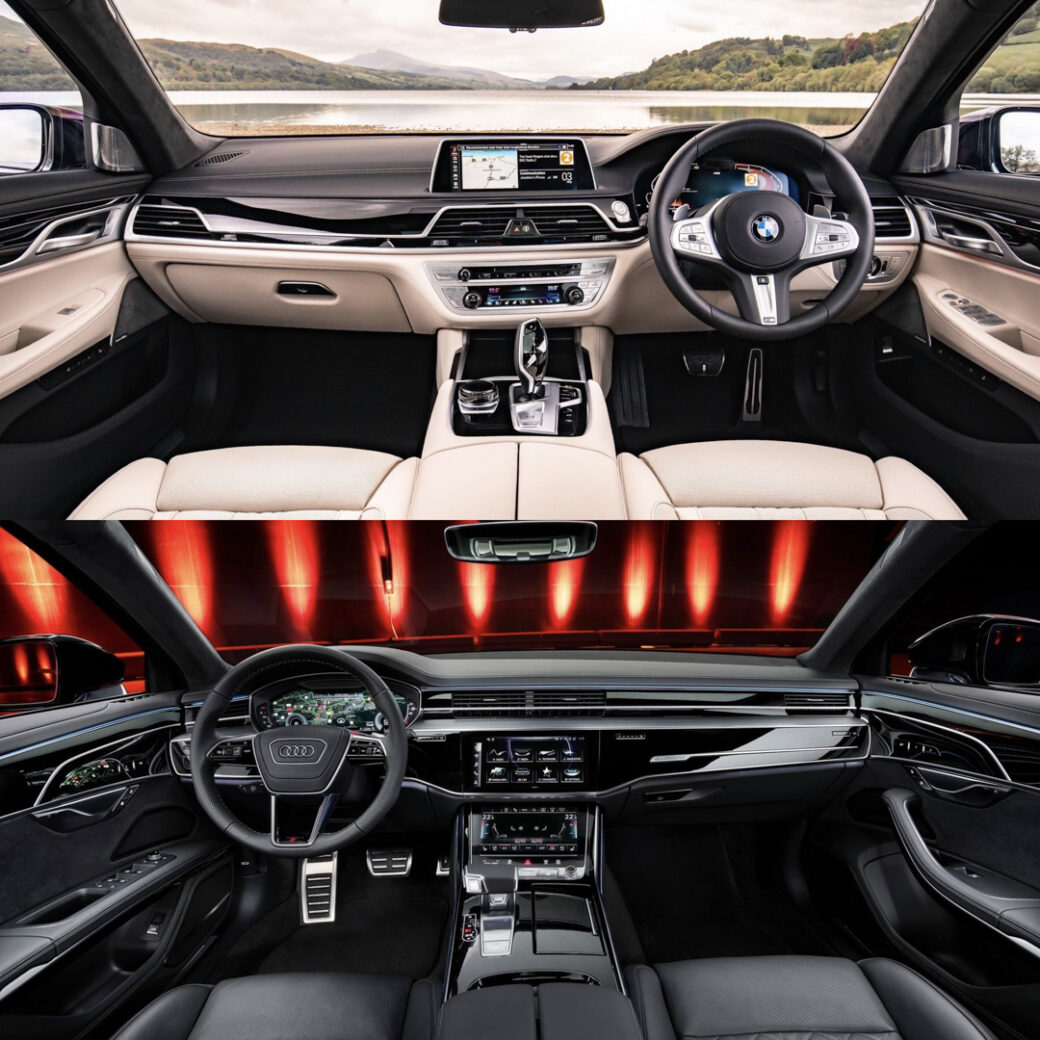 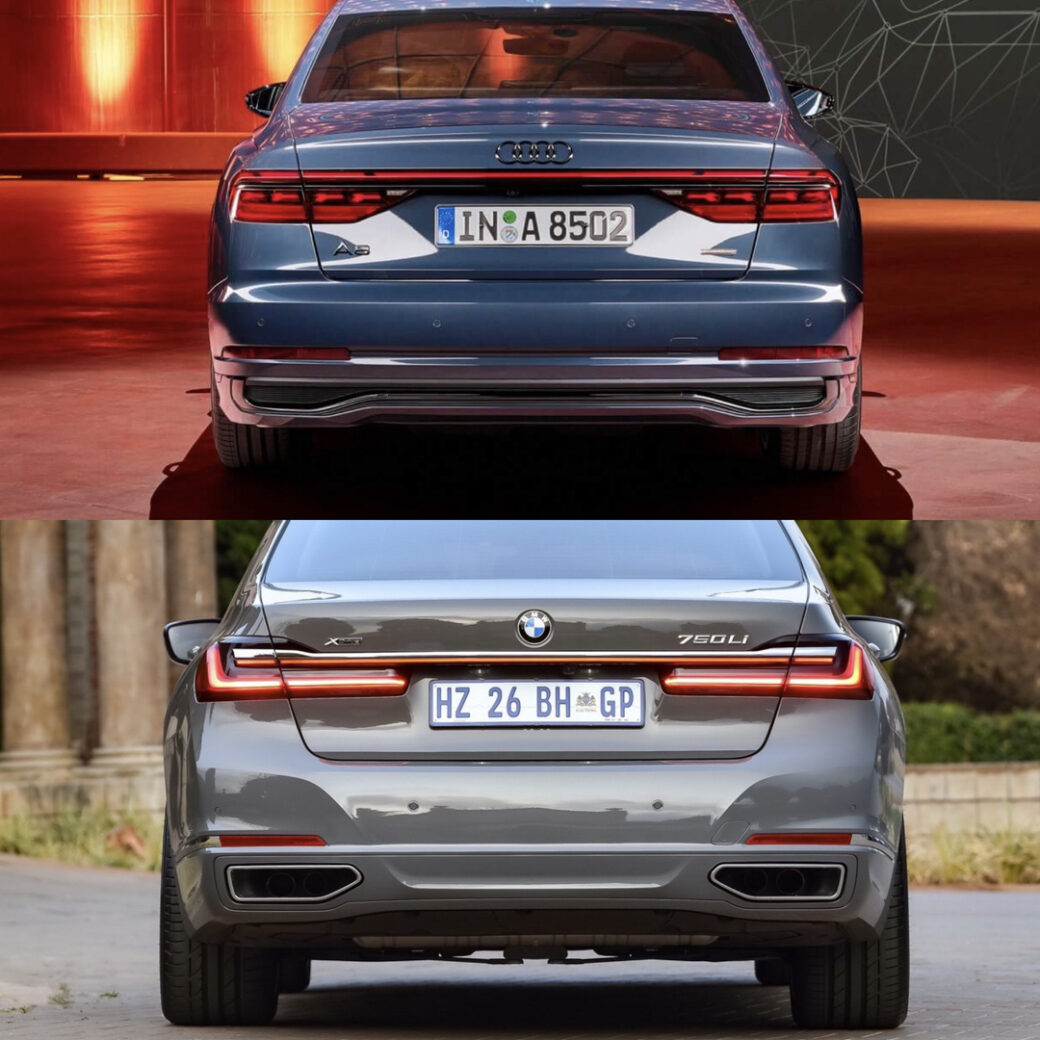 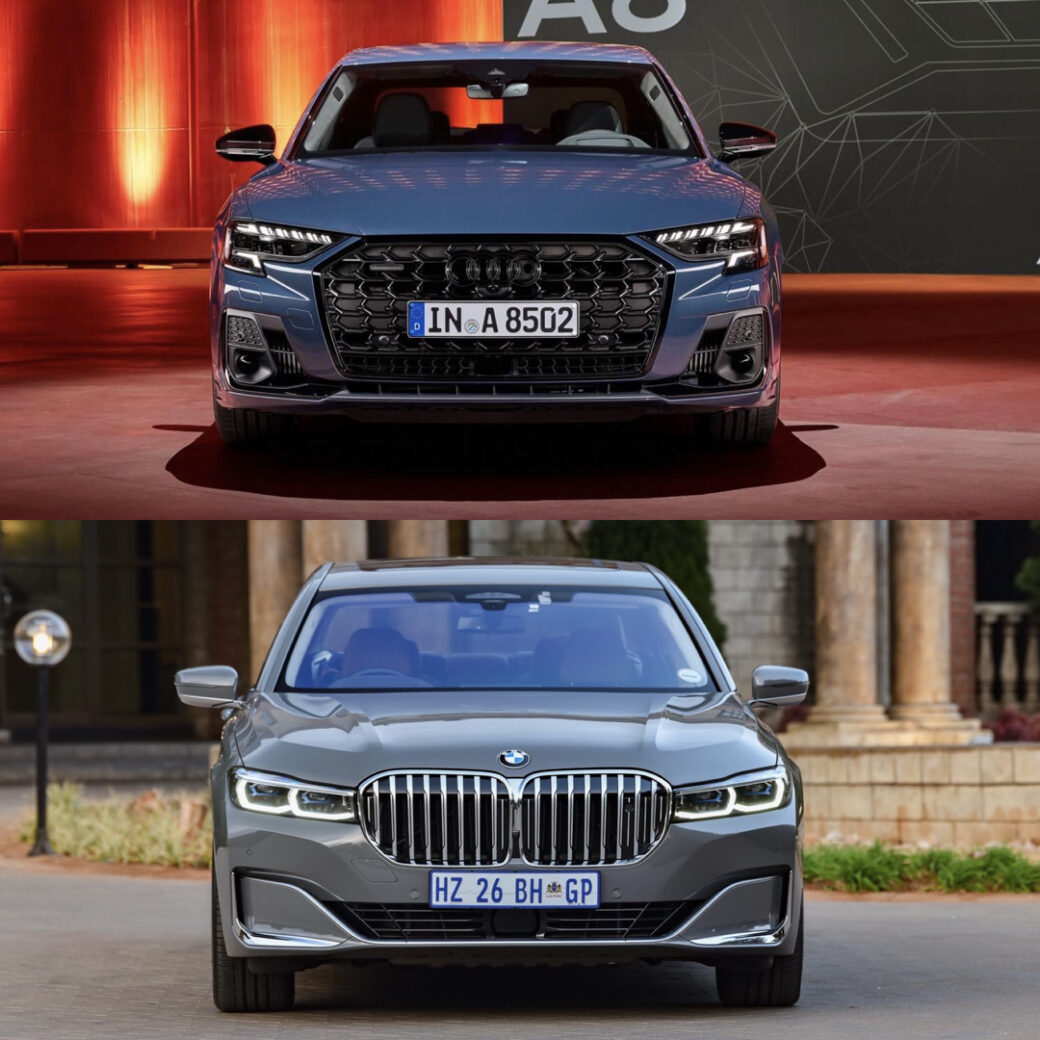