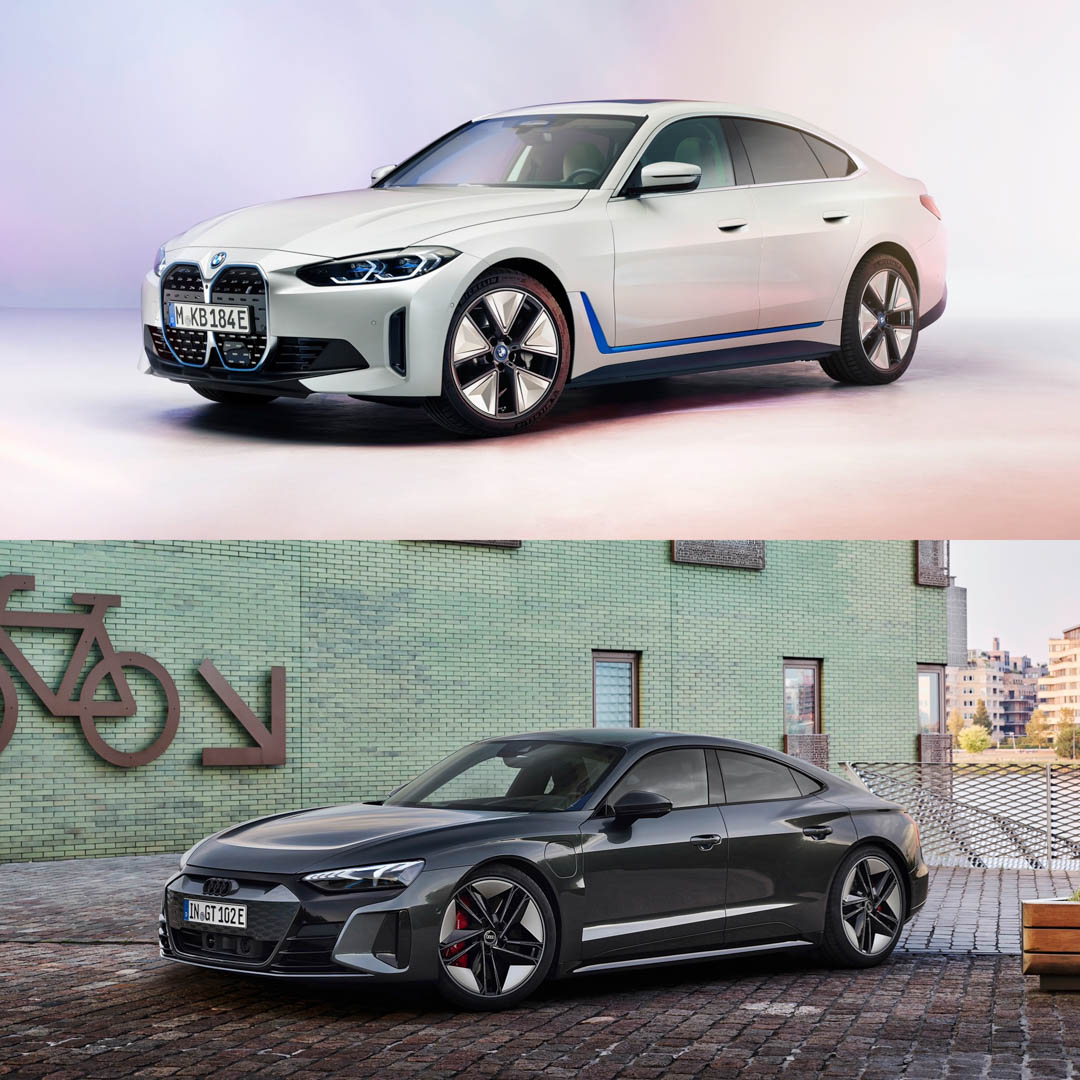 BMW just semi-revealed its first-ever electric sedan — the BMW i4 — to the world early this morning. I say semi-revealed because there were only a few photos released and about half of the total car’s specs. From what’s been released, we can still do some photo comparisons, though, so you know we’re going to. But before we do, a few things to point out.

Even though the BMW i4 and Audi e-tron GT look like close competitors, in fact they’re not. For a few reasons. One. The cars are built on entirely different architectures. BMW used the “Power of Choice” approach for the i4: one platform to fit all drivetrains available. While the e-tron GT is on an individual electric platform, also shared with the Porsche Taycan. Whether BMW continues down the path of “Power of Choice”, remains to be seen, especially after they just announced the “Neue Klasse.”

Two. That has some implications when it comes to the design and engineering freedom. You can certainly be more adventurous when you have a dedicated platform. Look at the BMW i3 and i8.

Three. Being on the same platform as the Taycan, the e-tron GT is larger in size than the i4, so it won’t be an apples-to-apples comparison.

Four. The Audi e-tron GT starts at $100,000 and goes up from there. Significantly. The BMW i4 won’t certainly get near that. While we don’t have the exact figures, we do know that it won’t play in the same price market as the e-tron GT. The i4 will be the more affordable car, more of a BMW i3 replacement. Of course, there will be multiple i4 variants, including an M Performance one, but still considerably cheaper than an e-tron GT.

However, styling must be compared because we’ve been doing this for a long time and most of the time, there aren’t exactly matching products in everyone’s lineup. Sometimes in the future, there might be identical products in all automakers’ portfolio, but for now, we try to find some common ground in these comparisons.

In this case, two exciting premium electric vehicles from respected automakers with different philosophies. On top of this, both are high-performance electric four-doors with all-wheel drive. So even though styling comparisons can be subjective, and most cases they are, there are customers out there who will nonetheless compare them. Same as they did with the BMW i3 and Tesla Model 3. 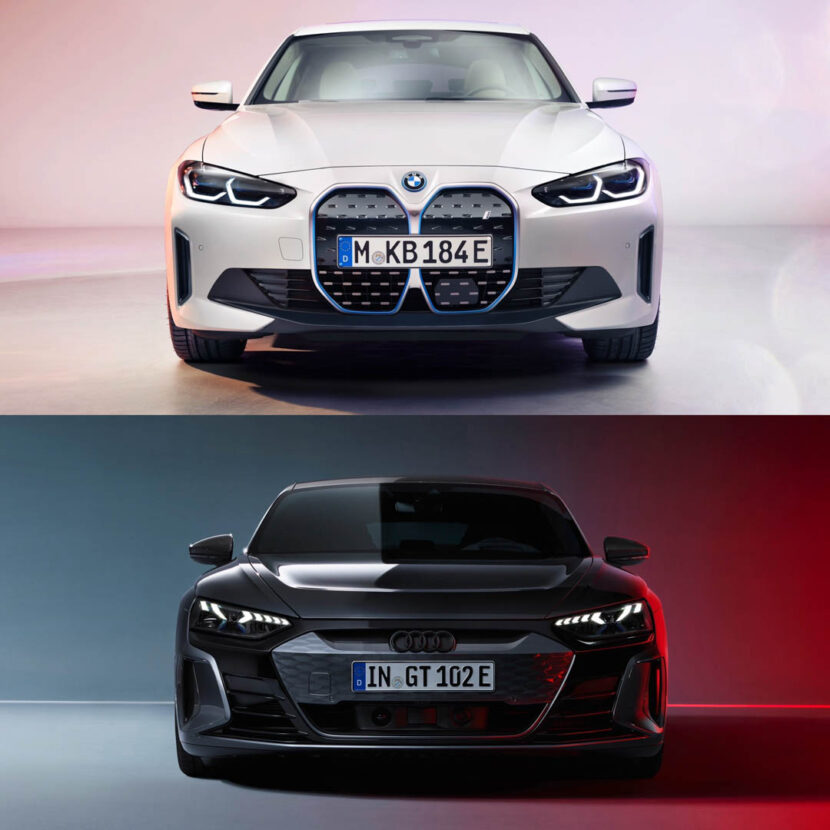 From the front, it’s a pretty easy victory for the Audi e-tron GT, mostly because of the kidney grille approach. Its front end is low, wide, and very aggressive. By comparison, the i4’s upright grille and smooth headlights almost give it a bubbly crossover look. Audi has cleverly integrated its Singleframe grille design into the car by sort of removing it altogether but playing with two-tone colors to remind you of where it used to be. While BMW has stuck its massive kidney grille right onto the front of the i4, with almost no regard to the rest of the styling around it. It’s one of those things: you either hate it or love it, and the jury is still out on that one.

In profile, the Audi e-tron GT wins again. It’s low, it’s sleek, and it’s muscular. It looks as if the sheet metal is shrink-wrapped around a muscular frame, looking like a well-toned athlete. The BMW i4 is slab-sided, seems shockingly tall by comparison, and is more reminiscent of a BMW X4 than a four-door version of the 4 Series Coupe. Both have aerodynamic star-shaped wheels but Audi’s are more visually interesting. Of course, the i4 is heavily influenced by the 4 Series and the Gran Coupe shape. 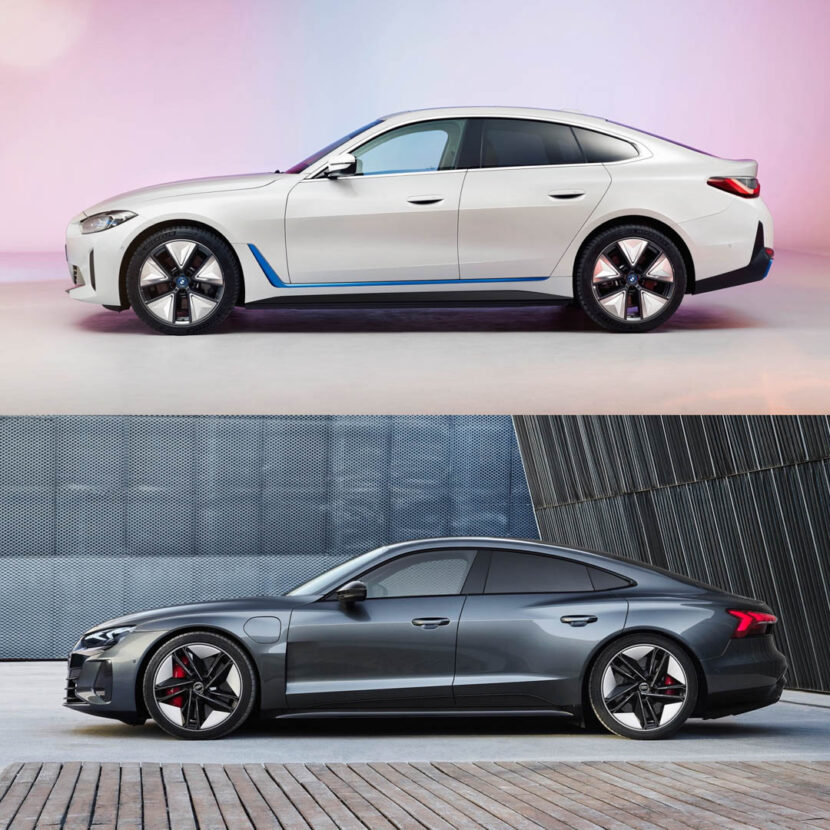 Out back, Audi takes the win again. In my opinion, and I’m not a designer, there are almost no design cues at the back of the i4 to speak of. Especially in white, it just looks like a blank slate with taillights. While the Audi e-tron GT gets a massive, dramatic OLED lightbar that spans the entirety of its rear end. Additionally, from the back, you can see the muscular rear haunches flaring out, giving it immense presence. The Audi is so more more muscular and aggressive, compared to the minimalist approach of the BMW i4. It’s also funny because BMW often gets criticized for overstyling their products.

There is no question — the Audi e-tron GT is the superior looking car. It’s low, lean, and muscularly, without an ounce fat on it. It also has a natural advantage, being built on a bespoke EV platform, so Audi was able design such gorgeous muscularity without needing to work around certain structural points of a chassis designed for gas engines. 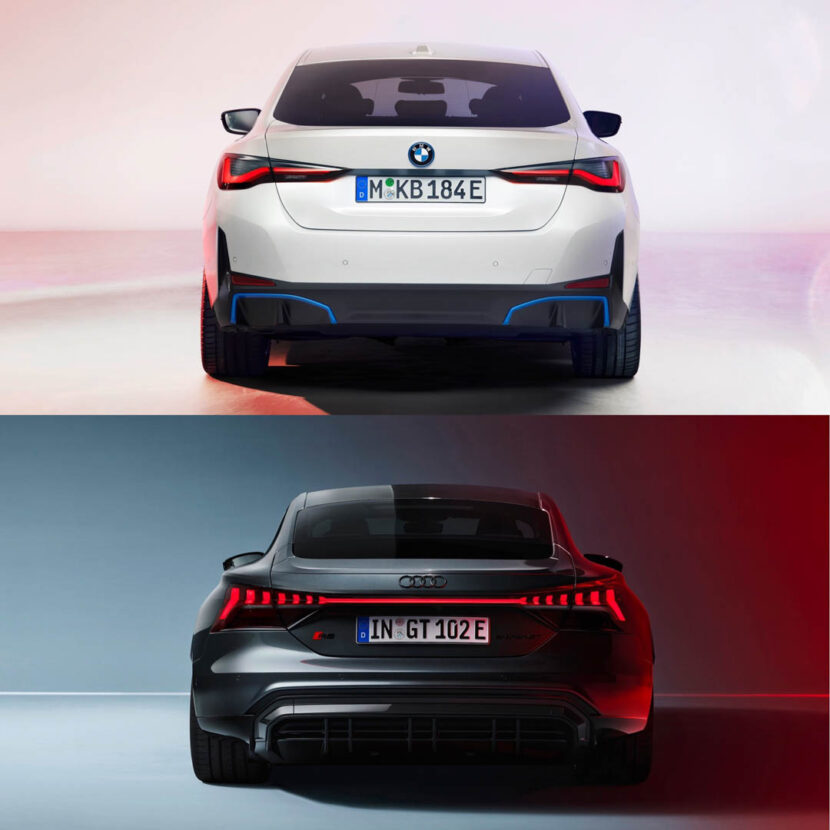 The BMW i4 is built on the 4 Series Gran Coupe and it shows by not having any of the design or packaging advantages that pure EVs have. Which isn’t an excuse for the BMW i4, though it is an excuse for the designers, because it was BMW execs that made the decision to stick with a shared architecture. But that could change in the future since BMW has just – somewhat – announced the return to a dedicated EV platform arriving by the end of this decade.

And that excites us because maybe products like the exotic i8 can find a new home at BMW. 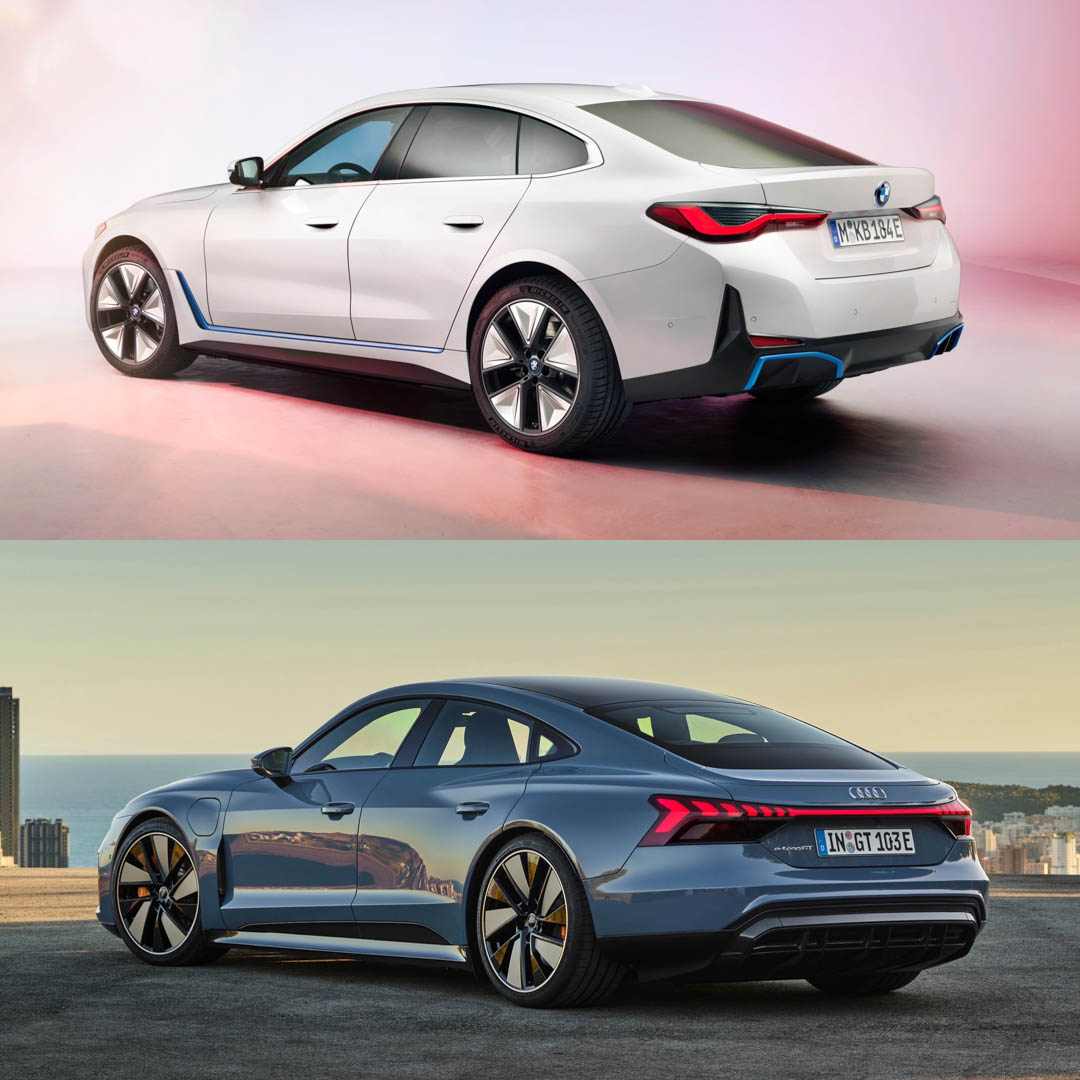 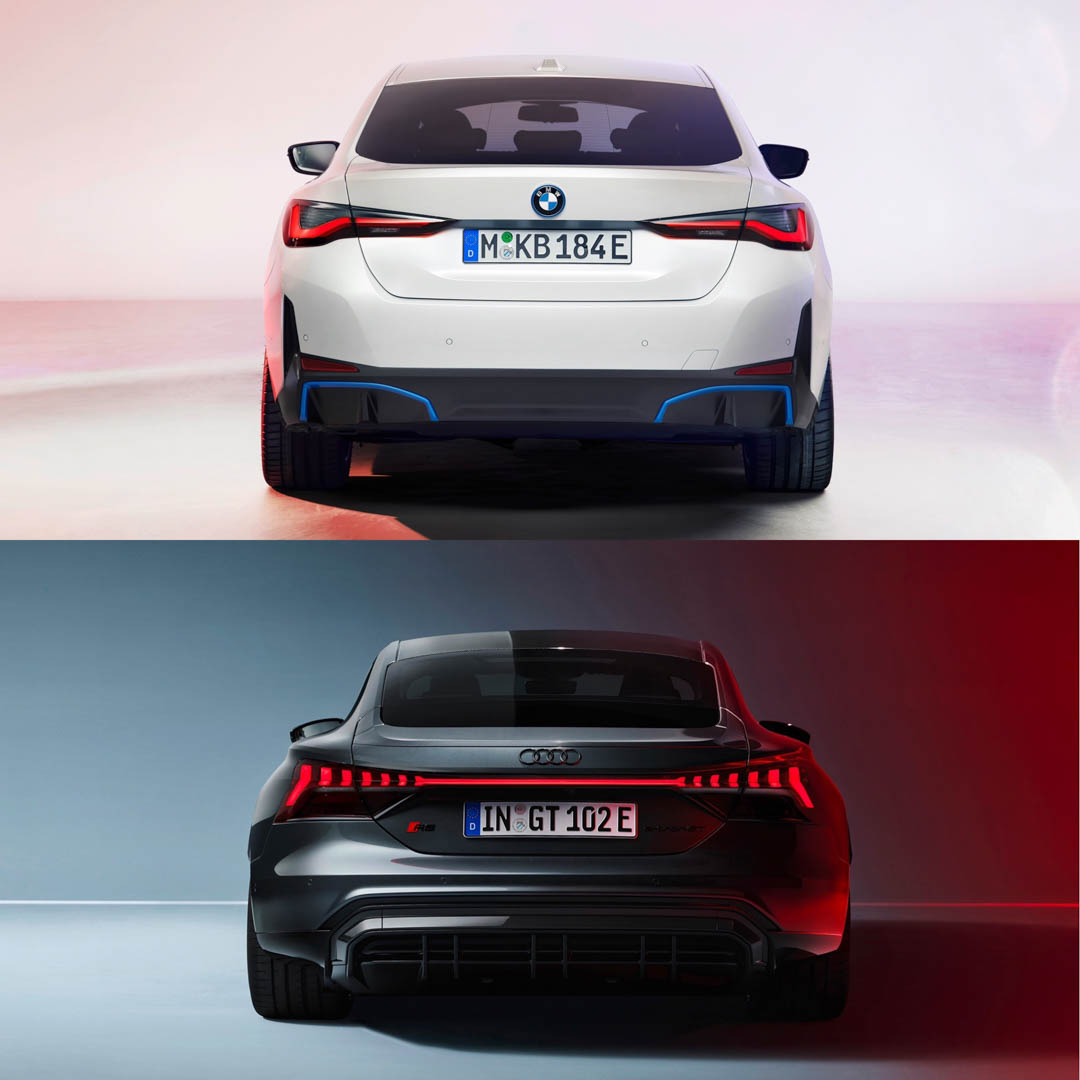 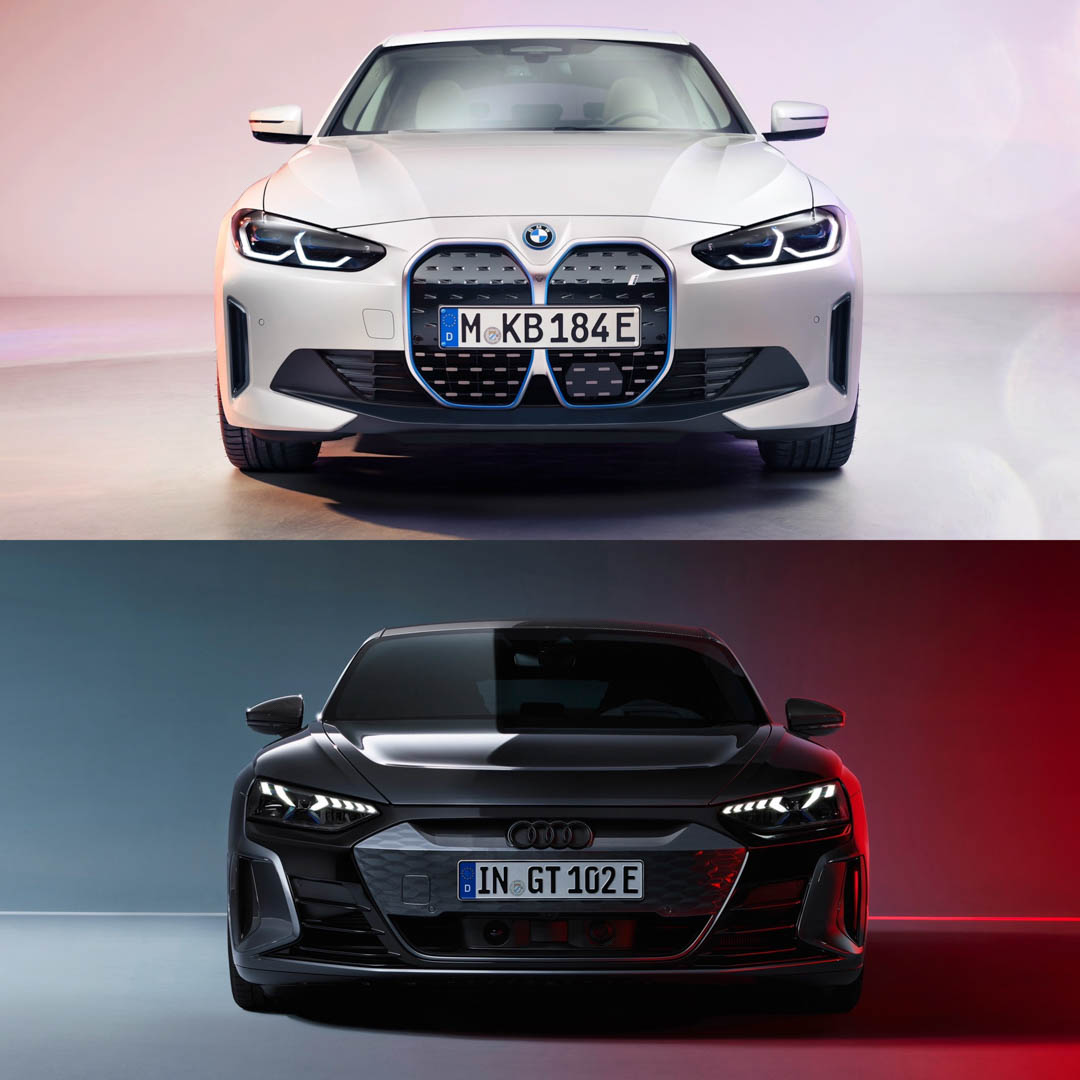