Video Review: BMW M2 CS – Is It Significantly Better Than The M2 Competition?

I recently had the rare opportunity to spend a ton of time in the BMW M2 CS, immediately after having driven the M2 Competition. After having driven the two cars back-to-back, I was then allowed to borrow the manual-equipped M2 CS for a few days and it was a genuine treat. Though, as much as I loved the M2 CS, I did wonder if it was actually worth the extra money over the already brilliant M2 Competition. In this video, I explain whether or not I think it is.

The BMW M2 CS does have quite a few upgrades over the standard M2 Comp. For instance, it has 444 horsepower from its 3.0 liter twin-turbocharged I6, versus the M2 Comp’s 405 horsepower. It also has a carbon fiber roof, carbon fiber hood, adaptive suspension, revised steering and even revised chassis tuning. On the outside, it gets BMW M’s style 763 wheels with a gold finish, carbon fiber accents and a hood scoop. On the inside, it gets an Alcantara steering wheel, Alcantara center console and a carbon fiber central tunnel. It also ditches the center console cubby, to make it lighter. 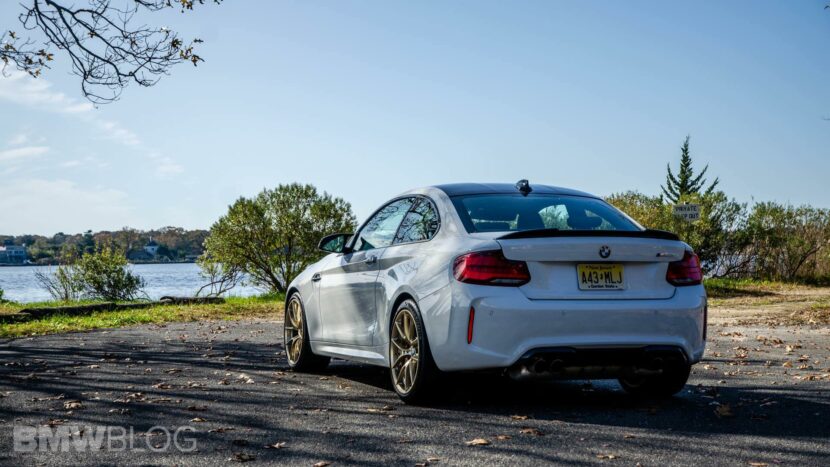 So does all of that add up to a better package? Well, yes it does. However, its upgrades are only really noticeable on track, where you can actually push the car. On the road, its upgrades are barely noticeable, as the M2 Competition is already such an impressive and exciting road car, that you won’t notice any upgrades until you push it past what’s safe on the road. Having said that, the M2 CS shockingly rides better than the M2 Competition, despite being sportier, and does seem a bit more exciting, thanks to its lack of sound deadening material on the inside.

But is the BMW M2 CS worth the nearly $30,000 increase in price over the standard M2 Competition? Yes and no. It depends on what you want. If you can afford it and you want the most special version of the M2 possible, then yes it’s likely worth it. However, if you’re just looking for a great driving BMW experience and don’t need all of the extra carbon bits, you’re better off saving some money, buying the M2 Competition and upgrading it with some new coilovers, better wheels and tires and stronger brakes. Do that and the M2 Comp will be every bit as special feeling as the M2 CS on the road.

That said, the BMW M2 CS is still the best driving BMW on sale at the moment, even if it’s only by a bit. Check out our video review below.