Now that BMW has a front-wheel drive-based 1 Series, you’d think it’d be the car to take on its German hot-hatch rivals. However, both Audi and Mercedes-AMG have hot hatches faster than what BMW can muster with the 1 Series. Both the Audi RS3 and Mercedes-AMG A45 are significantly faster than the BMW M135i. Which is why if BMW wants to compete, it’s going to need an M2 Competition to do it.

I know, it’s not exactly fair but hell, it’s the closest weapon you can get from Munich. The guys from Motor1 Italy set up such a drag race and the video of it can be seen below. 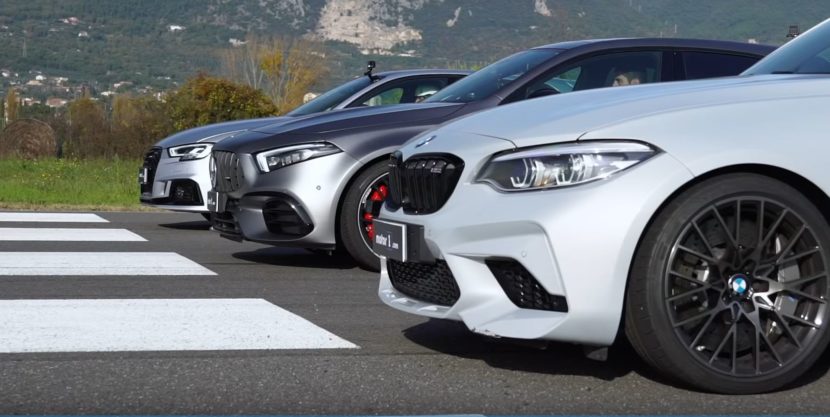 Some things need to be mentioned though. Both the A45 and the Audi RS3 have all-wheel drive. That’s a key advantage when drag racing from standstill, especially against a RWD car. Furthermore, this match-up is quite interesting because of the engines of these cars. We have a 4-cylinder 2-liter turbo mill in the Mercedes-AMG A45, a 2.5-liter 5-cylinder in the Audi RS3 and a 3-liter straight six engine in the M2 Competition. All are turbocharged but the M2 Competition has two of them, while the other two cars make do with just one each.

In terms of power output, the smallest engine here has the most horsepower, the A45 claiming 421 PS. Then comes the BMW M2 Competition with 410 PS and the Audi RS3 with 400. Therefore, everything tips the scale in favor of the Mercedes-AMG model. Even the acceleration times claimed by the manufacturers point in only one direction, with the AMG A45 hitting 62 mph in under four seconds. The RS3 can do the same. While the M2 Competition takes about 4-seconds flat to hit 62 mph. The biggest issue for the M2 Competition is putting the power down as a dyno run done by the guys from Motor1 – included in the video – revealed it had the most power.