SPIED: G80 BMW M3 shows off its grill at the ‘Ring

Ever since the BMW Concept 4 was revealed, fans have been worried about the reveal of the upcoming BMW M3. For the G80-generation, it’s been said that the M3 will adopt the massive Kidney Grille design from the Concept 4 and upcoming 4 Series. We believe this to be true, according to our sources, but also because of some new spy photos. (We don’t own the spy photos but see them here)

In these new spy photos, we can see the upcoming G80 BMW M3 lapping the Nurburgring in heavy camouflage but with a lot of its new grille showing. Sticking out of the camo, we can see two massive Kidney grilles with very widely spaced vertical slats. So right off the bat we know that the new M3 won’t get the dotted grille insert of the Concept 4 but it does look large enough to get the concept’s grille shape.

What’s interesting is that, underneath the license place — as well as some camouflage — the Kidney Grille seems to extend even lower. In the lower portion of the grille, we can also see widely spaced vertical slats that seem to coincide with the ones in the top portion. So they might just be extensions of those in the top half of the grille. The only difference is that, behind the slats of the lower half, there seems to be some sort of intercooler.

So it seems that the G80 BMW M3 will be getting a monster grille after all, for better or worse. What we can’t tell is whether or not that monster grille will be split into two halves, upper and lower, by either a license plate or piece of body work. It would be a similar design to what Audi did back before it switched to a its “Singleframe” grille design. Will the license plate bracket mount right to the grille? We’ll find out eventually. 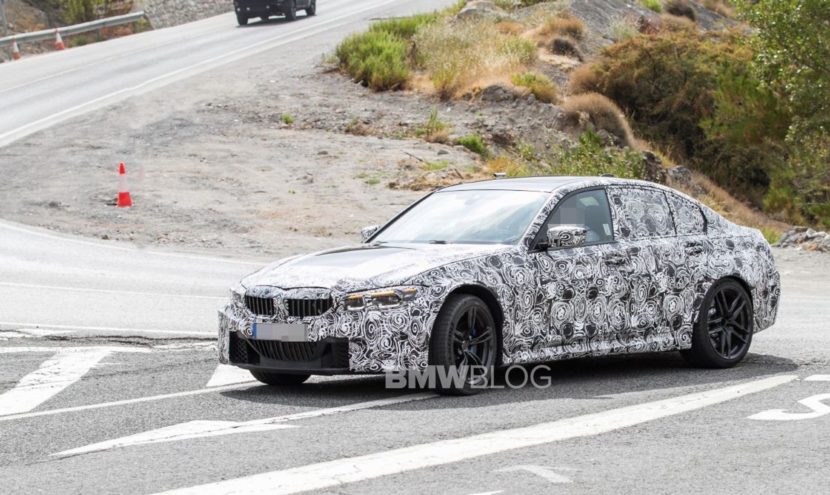 There are also some other bits of interesting information to be gained from these spy photos. For starters, its headlights look quite sleek and pretty. It also seems to get a double-bubble roof, likely with a carbon fiber option. We’re excited to see what becomes of this next-gen BMW M3, as it will be an M3 of many firsts, including the first all-wheel drive M3 and the first M3 with two drivetrain options. Add the first M3 with a grille large enough to inhale medium-sized raccoons to that list as well.